Giuliani’s media work for Trump may backfire on his business 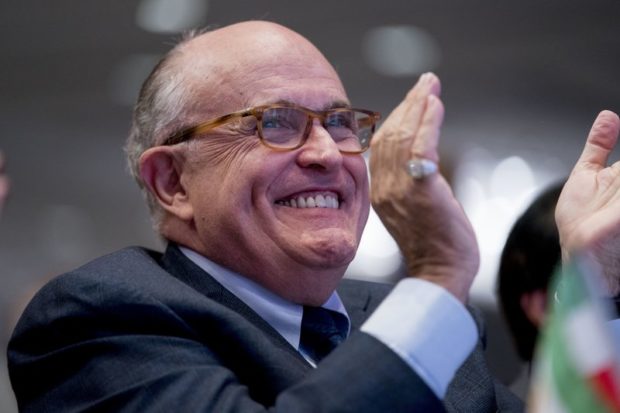 Rudy Giuliani is skating on thin ice with his media appearances for Trump. AP PHOTO

WASHINGTON— Lawyer Rudy Giuliani’s decision to join President Donald Trump’s legal team could backfire on the former New York mayor if potential clients of his international consulting business view him as too erratic and go elsewhere for representation, according to legal experts.

Giuliani has become a lightning rod in the short time he’s been in the president’s corner leading an aggressive media blitz to fight back against accusations that could threaten Trump’s presidency. He’s stunned Trump’s inner circle by making confusing and at times contradictory statements that could trigger even more legal and political headaches for the White House. Giuliani, for example, recently had to backpedal after he was quoted as saying that Trump had denied AT&T’s bid to purchase Time Warner for $85 billion.

“Giuliani’s television appearances do not inspire confidence in his ability as a lawyer or as a public relations professional,” said Kathleen Clark, a law professor at Washington University in St. Louis. She said she could understand why the powerhouse law firm Greenberg Traurig, where Giuliani worked until last week, “would want to distance itself” from Giuliani’s on-air performance.

“It could be good for Giuliani’s consulting and legal work if he were doing a better job,” Eisen said. “But no clients are going to be won over by the fact that he’s implicated Trump,” said Eisen, who chairs the left-leaning Citizens for Responsibility and Ethics in Washington, a nonprofit watchdog group that’s frequently challenged Trump for alleged conflicts of interest.

As the public face of Trump’s legal team, Giuliani has said he couldn’t guarantee that the president wouldn’t end up asserting his constitutional right to refuse to answer any questions from special counsel Robert Mueller’s team investigating Russia’s election intrusions. Trump suggested during the presidential campaign that innocent people don’t take the Fifth Amendment.

Despite the rough patches, Giuliani seems to be a natural fit for Trump. They are in their 70s, have known each other for decades and share a pugnacious, often over-the-top rhetorical style honed in New York. Giuliani, a former U.S. attorney and presidential candidate, had been expected to join Trump’s Cabinet but was passed over the post he most wanted, secretary of state.

But he’s now in a position to play a pivotal role for Trump. Successfully steering the president through the Mueller probe could make Giuliani the top contender for attorney general if Trump ever decides to replace Jeff Sessions, said Paul Rosenzweig, a fellow at the R Street Institute and a former legal adviser to Kenneth Starr, the independent counsel in the Whitewater investigation.

Giuliani resigned May 9 from Greenberg Traurig, where he’d been a senior adviser and head of its cybersecurity, privacy and crisis management practice since 2016. He initially had taken an unpaid leave of absence, but the firm noted in a statement that his work for Trump is “all consuming” and lasting longer than anticipated.

Separately, Giuliani has a consulting firm in New York that he founded in 2002 after leaving the mayor’s office. Giuliani Partners didn’t return a request for comment on his status while he assists Trump.

Scott Amey, general counsel at the Project on Government Oversight, said Giuliani should adhere to the ethics pledge required of the president’s appointees that bans “influence peddling” by those joining or leaving government service for terms of one year or much longer.

“Access is everything in Washington and Giuliani shouldn’t use his position on President Trump’s legal team to provide a direct line of communication between his law firm’s clients and the president or to funnel information back to those clients,” Amey said.

Giuliani has never registered with the U.S. government as a lobbyist. He declared in a 2016 New York Times interview that he’s never lobbied for any interests, foreign or otherwise. But Giuliani Partners has helped companies on behalf of foreign governments, including Qatar, Saudi Arabia and Venezuela. He also advised TransCanada, which sought to build the Keystone XL pipeline, and helped the maker of the painkiller drug OxyContin settle a dispute with the Drug Enforcement Administration.

He’s at times represented foreign governments and multinational corporations with interests that diverged from those of the United States. Giuliani traveled to Belgrade to meet with leaders of a Serbian political party once allied with Serbian strongman Slobodan Milosevic. And his firm received money for supporting the Mujahedin-e Khalq, the Iranian dissident group, even as it was a U.S.-designated foreign terrorist organization.

Giuliani also is chairman of Giuliani Security & Safety, which offers foreign governments and multinational corporations a “full platform of security, investigative and crisis management services,” according to the firm’s web site. Giuliani visited Kharkiv, Ukraine, in November as part of the firm’s work to help improve security in the city.

Clark, the Washington University law professor, said Giuliani might have been gambling that his increased visibility and access to Trump could attract clients who want the president’s ear.

“As long as Giuliani remains in Trump’s good graces, those clients might be willing to pay Giuliani for that access to Trump,” she said.