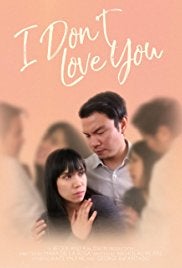 LOS ANGELES –The Becky and Baldwin production company digitally released its debut film, I Don’t Love You, directed by Mara De La Rosa with a screenplay by Nicholas Pilapil.

I Don’t Love You pays tribute to the filmmakers’ Filipino heritage in a parody of the popular Filipino teleseyre genre. I Don’t Love Youis available to watch in its entirety at http://bit.ly/IDLYfilm.

“I Don’t Love Youis an homage to the films I saw growing up in the Philippines,” says director and Becky and Baldwin co-founder Mara De La Rosa. “It’s a melodramatic story about love—that’s funny. I wanted audiences to enjoy the drama and craziness, but also laugh along with it.”

The short film follows newlyweds Benji and Malou. Malou is Benji’s world, and she has what should be a picture-perfect life: a doting husband, a nice house, and a life in America. But, Malou is hiding a secret, shocking enough to tear their worlds apart. And as they prepare dinner her secret and his dark truth are revealed.

Making the film was personal for its creators. Screenwriter and Becky and Baldwin co-founder Nicholas Pilapil was inspired to write the script as a way to connect with his Filipino roots.

“I’m Filipino American, but I wrote Filipino characters even though I’ve never been to the Philippines nor do I speak the language. Writing I Don’t Love Youallowed me to get more in touch with my family’s culture.”

Despite the comedy of the film, the parody tackles a serious issue for De La Rosa—immigration. “As people who long to live in America, many immigrants will do anything to become a citizen, and in the film, the character of Malou is so desperate for the American dream that she marries a man she does not love. As an immigrant myself, I know the struggle and the dream,” she says.

“Hilarious…I was laughing from beginning to end!” said That’s My Entertainmentin a review of the film. I Don’t Love You was also official selections of the 2017 Los Angeles Philippine International Film Festival and Fil-Am Creative’s Fil-Am Creations: A Filmmaker Movement—where the Philippine Newscalled the film, “The laugh-out-loud funny film of the evening.”

I Don’t Love You stars Kaitlyn Fae and George Infantado, and features original music by Simón Wilson. The short film is available to watch for free at beckyandbaldwin.com.