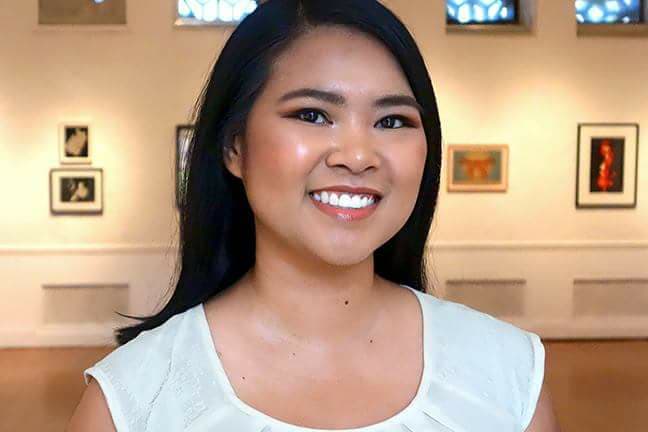 Filipinos who immigrate to foreign countries often bring something that remind them of their villages and towns. These mementos can help children learn about their parents’ cultures and perhaps help them identify themselves as Filipinos too.

The Gawaran household in the suburb of Michigan is no different. Above the fireplace, there is a shield showing “Weapons of Moroland” and a giant pair of wooden spoon and fork hanging on the wall in the dining room. Tablecloths, pillowcases embroidered with flowers, bahay kubo, and other Filipino patterns are kept in the closet. But the wooden coconut shredder (kudkuran) made by JeanClare’s father make their household unique.

Born and raised in Michigan, JenClare Gawaran, an art professor and artist, began to reconnect with her Filipino and Asian ancestry through her printmaking arts. Thanks to the “pieces of culture” brought from the homeland and, later, trips in the Philippines.

JenClare’s art works have been shown in numerous galleries in New York, Chicago, Los Angeles, and Hilo, Hawaii, and abroad at the Jyvaskyla Art Museum in Finland and the Jerusalem Print Workshop. Others have been part of the Salt City Dozen print portfolio at Syracuse University and in the permanent collection of the Detroit Institute of Arts and the Guangdong Museum of Art in China.

An American and a Filipino too

JenClare’s parents arrived in the United States in the’70s for better opportunities. She has older siblings who were born in the Philippines.

“I am the youngest in my family and the only one born in the US, so I have never really felt like a migrant here. I have always considered myself an American,” JenClare says. 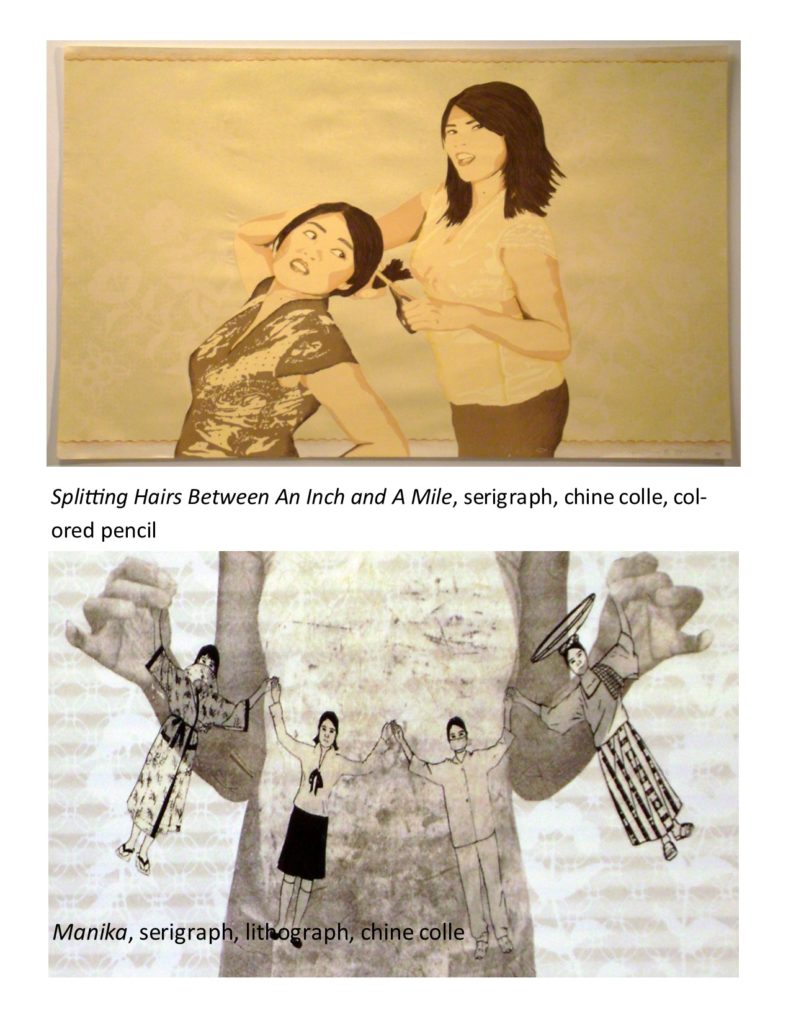 Being American-born and US citizenship do not guarantee social acceptance particularly for someone with brown skin. Although not all people she encountered asked about her background, JenClare would meet some who are curious about her.

“When I say I am from, ‘Metro Detroit,’ they reply, ‘No, I mean where is your family from?’” There are both Asian and Filipino stereotypes that get cast on me, and I have to explain to others as to why I do or do not fit into those stereotypes,” JenClare says.

She relates that her parents and other Filipinos encountered more “hateful discrimination” when they first came to the US –being called derogatory names, having their properties damaged.

“I have experienced some discrimination regarding my Filipino background, but nothing extremely scary or hateful. I had classmates that would make assumptions about me based on my Asian heritage.”

In both countries, duality is expected as well as stereotypes.

“As a Filipino American here, they probably think I work in the medical field as a nurse or doctor; good at math; is submissive and docile; English as a second language is exotic and mysterious; that I come from a rural island nation, so not familiar with modern or urban environments.”

In the Philippines, a Filipino American like JenClare can be seen as wealthy, or with a well-paid job, doesn’t have a lot of things to worry about, has a carefree life, or has a Caucasian spouse.
When she first visited the Philippines in 2005, JenClare realized how “American” she is.

“My ancestors may be from that land, but it can feel very unfamiliar and foreign to me. However, each time I visit, I feel more connected, little by little,” she explains.

JenClare admits to being disconcerted by the giant billboards of Filipina models advertising snow-white skin. It also raised her awareness of cultural expectations.

“It made me think about what people believe as ‘beautiful,’ and how that differs between Eastern and Western cultures. Does literally being ‘white’ mean you are more beautiful? Happier? More successful? In the US, the trend is the opposite — being tan and bronze is what many consider attractive,” JenClare says.

The stereotypes ended in her choice of career which is to become an artist, a printmaker. “They didn’t force me to become a nurse or a doctor,” JenClare laughs.

Her early works did not manifest her mixed background, but the trip to the Philippines changed her perspectives. JenClare started to compare and contrast the Midwestern American culture of same-looking houses in the suburbs with white picket fences, and the story of George Washington and the Cherry tree versus Manila culture.

Unlike painting, printmaking is not done directly on the canvas or paper. Instead, the artist creates a composition on another surface and transfers it onto paper or other chosen materials.

JenClare works with collage, drawing, serigraph or silkscreen printing, chine-collé or using fine paper usually “cut directly into the desired size for the artwork before being glued to the backing. Chine-collé involves printing and binding the different surfaces together all at once. All the prints are originals and are called editions.

“Through serigraph, chine-collé, collage, and drawing, I layer and combine visual cues and symbolism of cultural identity and gender expectations to create autobiographical work. Images of Filipino textile patterns and trinkets, combined with stereotypical symbols of Filipino, Asian and American culture, work together to create scenes that either stems from my childhood memories or reflect how I think I fit into and between these cultures and identities,” JenClare explains. Photo 3. Bunga, serigraph, 2006. Gawaran’s first work about the concept of beauty in the Philippines. One of the prints in this edition is in the permanent collection of the Guangdong Museum of Art in Guangdong, China. CONTRIBUTED

Bunga, serigraph, 2006,JenClare’s earliest work about the concept of white as beautiful and withstanding the negative effects of whitening products, is in the permanent collection of the Guangdong Museum of Art in China.

Exploration of culture and self

JenClare’s art explores Asian stereotypes and cultural cues, focusing more on her own experiences of being a Filipino, an American, a woman, an artist, and a lot more.

“My work is the result of me trying to sort out all these ideas, memorie,s and statements I have on my mind. I take all that and create imagery in an effort to understand it. I create artwork for myself, and I’m not trying to appease or impress others. I don’t make things intentionally trendy, either. My art and the statements behind it are just all very honest, and they grow and evolve as I do,” JenClare says.

“Pour yourself into your artwork, be honest when it comes to deciding what you want to make art about, do not hesitate to take advantage of exhibition opportunities, network with others and always know that you can always learn something new, no matter at what point you are in your artistic career!”