Hokusai: An artist of the people

Hokusai: An artist of the people 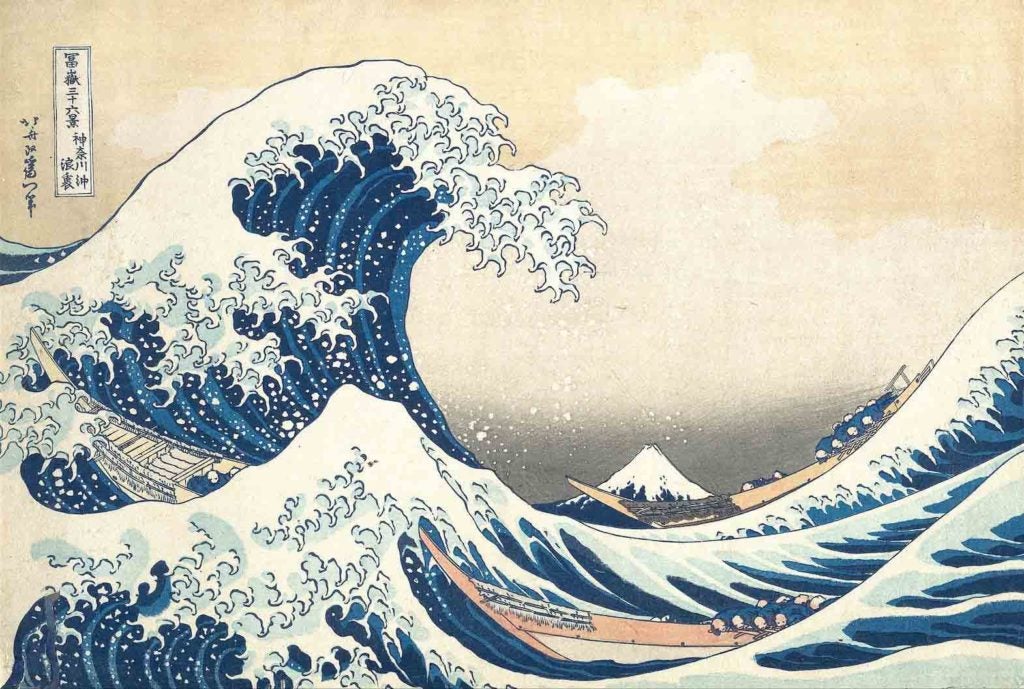 TOKYO—Some years ago, I remember a cartoon, perhaps it was in the New Yorker magazine, where one of the people on a life boat lost at sea suddenly realizes where they are. He recognizes the peculiar configuration of waves towering above them: The white crests resemble claws outstretched, somewhat menacingly, the rest of the waves hued in light and dark aquamarine.

The man exclaims that they must be near Japan.

Here of course the cartoonist is alluding to the iconic woodblock print by Katsushika Hokusai (1760-1849), “Under the Wave Off Kanagawa,” more popularly known as “The Great Wave.” It is arguably the most well-known print in Hokusai’s series, Thirty-Six Views of Mount Fuji. In it, the waves frame Fuji in the distance while threatening to engulf the people—fisherfolk? merchants? students?—on board three rowboats. Hokusai here captures both the ocean’s raw, overwhelming power and the quiet majesty of Fuji in the distance.

In the Sumida district of Tokyo, named after the river that runs through it, is the Sumida Hokusai Museum which I finally got to visit on this trip. Hokusai lived most of his life in Sumida, moving several times but almost always within the precincts of his childhood.

The river is subject of “Scenery of Both Banks of the Sumida River,” a seven-meter scroll displayed horizontally (as opposed to scrolls meant to be hung vertically), a central work of the current exhibition. While the original scroll itself is not on display, the replica is of excellent quality. One is instructed to view the scroll from right to left, though it doesn’t much matter if you simply let your eye wander and zero in on any of the scenes the artist fills the scroll with. There are bridges (a favorite Hokusai subject) packed with pedestrians, kids flying kites, ladies in their finery holding up those distinctive Japanese parasols, peddlers, ferries crossing the river, people from all walks of life deep in conversation, two women fishing, local shrines, etc. The panorama is one of life during the Edo period: layered, bustling, cosmopolitan. In it, Hokusai re-creates the river’s literal floating world, just as vividly as he portrays the metaphorical floating world of the ukiyo, with its bohemian pleasures from theatres, teahouses, and the charms of geishas and courtesans.

In an accompanying exhibition “Sketches by Hokusai,” several books of drawing manuals, as well as the aforementioned sketches, are on display. The books are often colloquially referred to as the Hokusai manga, and the argument is made that the artist can  be considered the genre’s father. A number of the books are replicas, and a visitor is free to hold and flip through these. The man had an extraordinarily fine hand, an eye for the telling detail, as well as a picaresque, even absurdist, sense.

The museum also has on display “One Hundred Poems Explained by a Nurse,” a series of prints that Hokusai created as a pictorial explanation—analogous to ekphrasis in Western poetry—of the classic anthology “One Hundred Poets, One Hundred Poems,” an anthology compiled in the thirteenth century. It seems Hokusai intended these as though a nurse were explaining the poems to her charges before they went to sleep—a bit of ribbing aimed perhaps at too an academic approach to the poems, something I can totally relate to! Twenty-seven prints comprise the whole series, of which twenty-three are owned by the museum and all are displayed, along with other related Hokusai works.

The man was prolific at the same time that he was very much a man of the world, an active participant in his community. It was the life of that community with its fascinating cast of denizens from all classes of society, as well as Nature, with its land- and seascapes, that he both drew his inspiration and material from. Not for him the seclusion from—and exclusion of—his milieu.

Hokusai’s works clearly reveal an individual reveling in his work. His formidable artist’s skills as well as his insight into our, human, behavior, allow us to participate and delight in the Hokusaian floating world—a testament to the generosity and transcendence of his spirit.