NY auction houses get set for an ‘extraordinary season’ 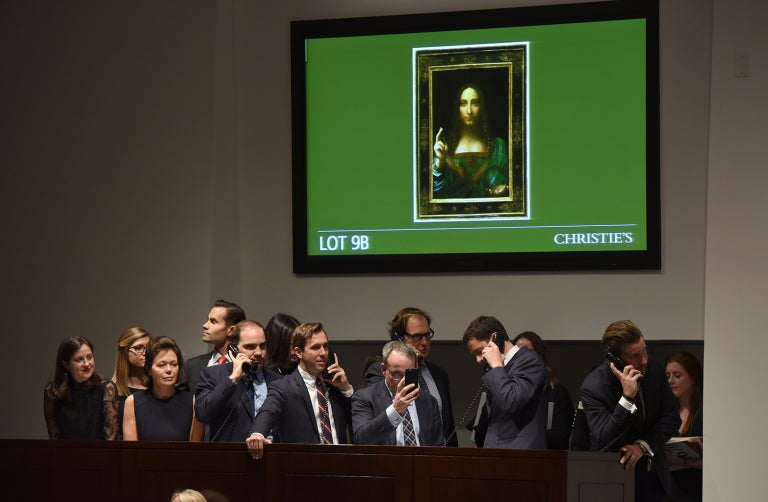 Christie’s sold da Vinci’s “Salvator Mundi”, a 500-year-old depiction of Jesus Christ, for $450.3 million in November, making it the most expensive work of art ever sold at auction. Image: AFP/Timothy A. Clary

Six months after selling a Leonardo da Vinci for half a billion dollars, New York art auction season is back, gearing up to break new records with a magnificent Rockefeller collection and a Modigliani.

The collection was amassed by the late billionaire banker David Rockefeller, who died last year aged 101, and his wife Peggy.

In all, Christie’s is selling 1,600 items over three days, with an expected take of $600 million. The proceeds are going to charity.

The jewel in this collection’s crown is Picasso’s 1905 masterpiece “Fillette a la corbeille fleurie” (“Young Girl With a Flower Basket”). Its purchase by Gertrude and Leon Stein, along with two other Rose Period paintings, helped jumpstart the artist’s career.

The Picasso alone is valued at $100 million, but the combined total is expected to smash the previous record for a collection set by that of Yves Saint Laurent and Pierre Berge, which fetched $484 million in 2009.

For the first time, Christie’s this year will spread its spring sales over two weeks, twice the traditional length, kicking things off on Tuesday.

This comes after Christie’s sold da Vinci’s “Salvator Mundi”, a 500-year-old depiction of Jesus Christ, for $450.3 million in November, making it the most expensive work of art ever sold at auction.

“After the Leonardo, I went through three weeks of a bit of a lowdown. But then you get excited by new projects,” said Loic Gouzer, co-chairman for postwar and contemporary art at Christie’s.

“Not only is the Rockefeller sale the biggest sale we’ve ever had at Christie’s, but the Impressionist and modern sale is also the biggest one ever,” he told AFP. “It’s probably going to be the biggest season Christie’s has ever had.”

The highlight of the second week is Sotheby’s May 14 sale of a stunning nude by Amedeo Modigliani, expected to fetch more than $150 million, the highest presale estimate for any work of art at auction.

Another of the Italian’s nudes sold for $170.4 million in 2015, currently the third most expensive work of art ever sold at auction.

Not only is Modigliani’s “Nu couche (sur le cote gauche)” his biggest painting, Sotheby’s calls it the greatest of his celebrated reclining nudes. It was the cover star of a recent retrospective at the Tate Modern gallery in London.

Simon Shaw, co-head of Impressionist and modern art at Sotheby’s, said Modigliani quietly revolutionized nude painting in the work, rooted in tradition but reflecting the changing status of women during World War I.

“This is a nude of a very self-possessed, sexually confident woman who is not looking out from a distance. She’s absolutely meeting our gaze,” he told AFP.

Overall, the season includes five works estimated at $70 million or more, including a painting by Malevich and a sculpture by Brancusi, and will test the depth of an increasingly globalized art market.

“I think demand is at an all-time high at this point for the very best of the best. It’s a selective market. It’s not every work that would meet that appetite,” Shaw said.

After the remarkable marketing blitz around the “Salvator Mundi” in November, the spring season is focused more than ever on a new generation of buyers building collections differently than in the past.

Traditionally divvied into Impressionist and modern, and postwar and contemporary, those categories are ebbing away as the new generation wants not just a savvy investment but the ultimate status symbol.

Both Christie’s and Sotheby’s, rivals founded in 18th-century London and still dominating the market, have mixed and matched periods in the hanging and grouping of their presale exhibitions.

Shaw says collectors “want the best of its kind rather than collecting a particular school or period,” adding that categories are increasingly “anachronistic.”

“It’s going to be an extraordinary season,” he predicted. “We’ve seen a lot of great works of art in recent times on the auction market but never anything quite like this.” JB