Guns, a nun, and free speech 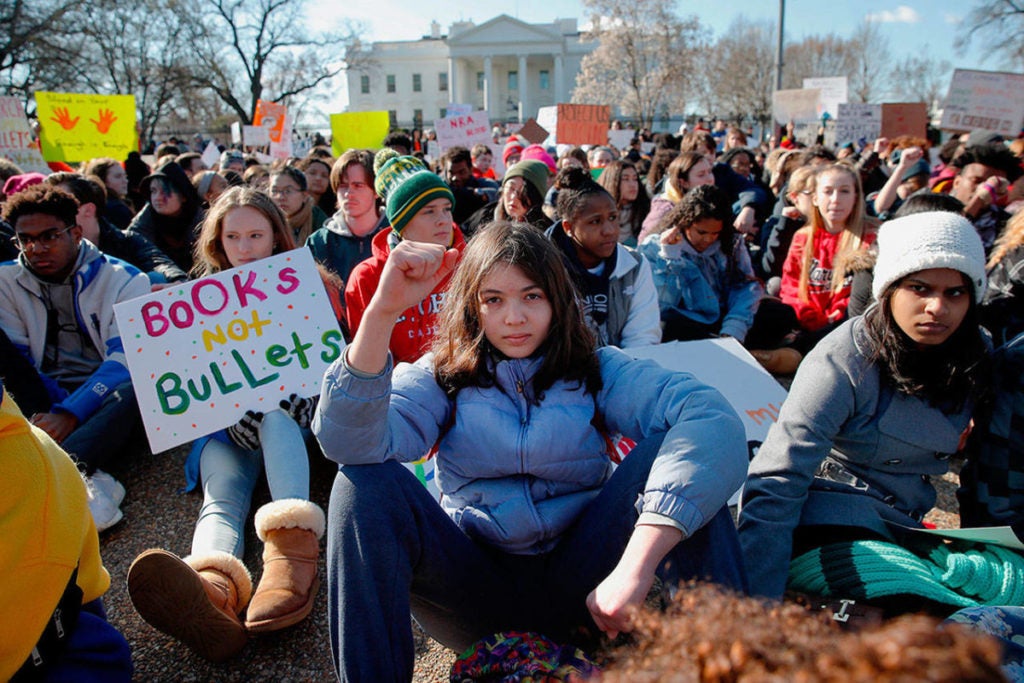 NEW YORK—Last Friday April 20thwas the anniversary of the 1999 mass shooting at Columbine High School in Colorado, in which a dozen people were gunned down. In what was billed as National School Walkout, thousands of students from more than 2,600 high schools across the country walked out of their classes to mark that anniversary.

In Manhattan, high school students from the city as well as New Jersey and Connecticut congregated at Washington Square Park to voice their anger and frustration at the lack of common-sense gun laws. They described practicing school drills and lockdowns since kindergarten for what they should not have to prepare for: a mass shooting. As if to underscore the importance of their (and our) worries, two days after, a 29-year-old man with an assault rifle, the AR-15, shot four people dead at a waffle restaurant in Tennessee. The victims were people of color, suggesting that this was a hate crime.

This movement has grown out of the February mass shooting at Marjory Stoneman Douglas High School in Parkland, Florida, where 17 people were gunned down by a killer wielding the AR-15—the weapon of choice in the vast majority of these shootings. Spearheaded by the high school students themselves, the movement has had it with the anodyne and completely ineffective declaration that public officials routinely issue, that their “thoughts and prayers” go to the families of the victims. One visualizes how these public officials, mostly Republicans, quake in their boots at the thought of possibly offending that Zeus among lobbyists, the National Rifle Association.

If there is any indication that common sense is in short supply where the availability of firearms is concerned, one need look no further than the usual, hysterical reaction that placing restrictions on the purchase and possession of guns elicits: that this is a direct assault on the Second Amendment, the right-to-bear arms provision in the Constitution, and could lead to its abolition. That is tantamount to making the idiotic argument that requiring a license to operate a motor vehicle is to somehow negate a person’s right to own and drive a car.

Another argument by the gun lobby: people kill people, not guns. Brilliant! And here I was thinking that guns by themselves walk into a high school or a movie theater or a music festival and pour lead into the unsuspecting and the terrified. Who would have thought that someone’s finger was needed on that trigger? A person can murder by strangulation or with a knife, but does anyone seriously think that, say, the Boston Strangler could have strangled 17 people in a few minutes? And what justification could there possibly be for allowing the sale of military-grade rifles to the public?

The harder it is to purchase a gun, the harder will it be for mass shootings to occur, as they do now with alarming frequency. Strict regulations do reduce gun-related deaths. Just to take two examples, on average, per million people, in Germany there are only 1.9 deaths while in Canada it is 5.1. In contrast, the rate in the U.S. is 29.7. Since the 2012 massacre at Sandy Hook Elementary School in Connecticut, approximately 1,500 mass shootings have occurred in the country.

Every politician who has buckled under the NRA’s threats at the polls has been complicit in these murders, and should be voted out of office.

In yet another manifestation of President Rodrigo Duterte’s misogyny and unhinged take on free speech, he says he was the one who ordered the Bureau of Immigration to arrest Australian nun Sister Patricia Fox for her “disorderly conduct,” which led to her temporary detention at the Bureau’s head office in Intramuros. Fox, a long-time resident of the Philippines and a member of the Sisters of Our Lady of Sion, is known for her work among the marginalized—the very ones who bear the brunt of the administration’s brutal war on drugs. Apparently, her participation in rallies by farmers for their land rights, and for the release of political prisoners drew Duterte’s ire. He said meddling by foreigners in the country’s domestic affairs would be “a violation of sovereignty.” A compliment to the 71-year-old nun, hardly a household name, and a sorry assessment of the nation’s strength.

Duterte went to say that “Freedom of expression is unlimited and it goes for everybody.” Really? That would be a surprise to all those who have been quite critical of his governance, particularly if they happen to be women. His actions belie what is so clearly implied in his statement, that free speech is a universal right. In a long rant, he segues into claiming that, at least in the Philippines, “Eh buti dito kriminal ang pinapatay ko” (“Good thing, here I kill criminals”). Now if that claim isn’t an assault on the country’s constitution and integrity, I don’t know what is.