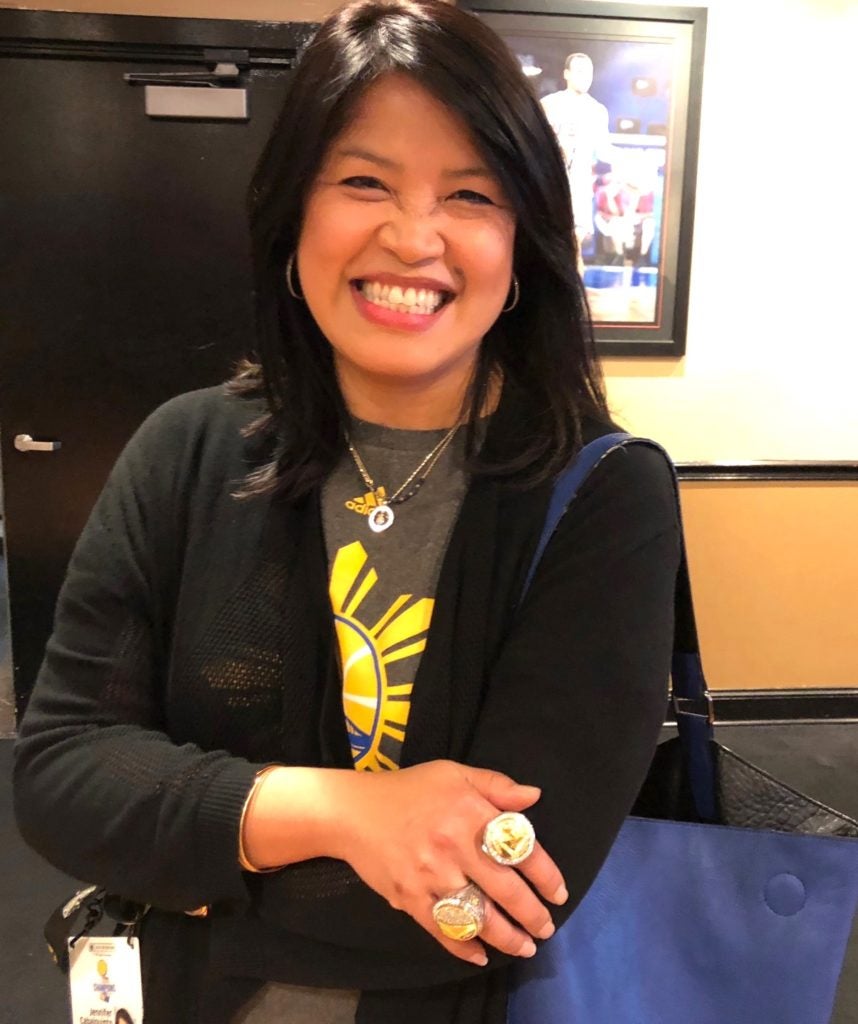 OAKLAND, California — The Golden State Warriors had its second Filipino Heritage Night of the season, last March 25, a Sunday, with a program that included Filipino American performers and press Q&A with two of the organization’s prominent Filipino American members.

The Fil-Am a cappella group The Filharmonic sang the U.S. National Anthem, Likha Pilipino Folk Ensemble performed Filipino folk dances at primetime, and at halftime, the Kaibigan Dance Company, a youth-young adult dance group did a stylized, hip-hop version of the tinikling.

Two Filipino Americans in the Warriors organization were made available to the Fil-Am media for a Q&A before the game. Presented were CFO Jennifer Cabalquinto and Raymond Townsend, the first ever Filipino American basketball player in the NBA.

Cabalquinto is the highest-ranking woman in the Warriors organization and in any U.S. sports franchise management. This is particularly notable given the fact that sports in America is still overwhelmingly male-dominated and male-centric as is the great majority of corporate boardrooms. (Per Foxsports.com, there are only 58 women CFOs in the Fortune 500 companies.) 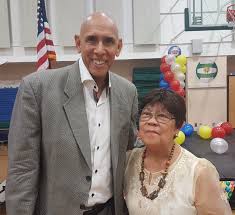 Raymond Townsend, the first ever Filipino American basketball player in the NBA, with a fan. INQUIRER FILE

A reporter from another media outlet asked Cabalquinto, “How do you handle being the only woman in, say, a boardroom full of men?”

Cabalquinto’s reply might as well be a mantra for the women’s movement in America (or any boardroom in the world): “I have competed against men all my life. I grew up with four brothers. When I’m in that room, I’m not conscious of the fact that I’m a woman. I’m just like any of the people in the meeting and if I have prepared well, I know that I will succeed.”

At the Heritage Night, Cabalquinto proudly showed off the two gigantic and fabulous diamond studded Warriors Championship rings. She was generous enough to offer reporters to try them on.

Raymond Townsend was drafted by the Warriors in 1978 and played for the franchise until 1985. He continued playing pro basketball for other teams both in the U.S. and other countries. Although he has since retired from playing hoops, he has not retired from basketball. His current mission is to help other Filipinos get into the NBA. Making trips to the Philippines to scout for talents, he has mentioned Bobby Ray Parks, Keifer Ravena, and Kobe Paras as those with potential.

Regarding Paras, he cited that he is a very talented player but he cannot just rely on his athleticism because there are bigger guys that are equally athletic or even more. Townsend also advised Paras to develop his jump shot if he really wants to get into and succeed in the NBA.

Townsend said that Filipinos who aspire to play in the NBA have to come to the U.S. while in their mid-teens and get into a school that has a good basketball program, where they can learn good fundamentals and get the feel for the competition levels here early on.

When asked if he had met another Filipino American in the NBA currently playing for the Cleveland Cavaliers, Jordan Clarkson, he responded that he hadn’t yet. They just missed each other in LA at the time Clarkson was traded to Cleveland. But he said he would reach out to Clarkson.

Townsend talked about going on another trip to the Philippines and this time staying longer.

Warriors PA announcer, Matt Hurwitz, mentioned throughout the Q&A how the Warriors organization acknowledges and appreciates the Filipino community’s support and embrace of the Warriors in good times and bad: “They stay up to the very end.” Townsend reiterated this sentiment saying that “Filipino Nights seem to feel more electric than other Filipino Nights in other cities.”