NEW YORK — For many years, “home” for Jocelyn Bernal Ochoa was her mother’s basement in Queens. There, she settled nicely when she was an unmarried accounting professional working for a publishing company in Manhattan.

In October 2008, she finally got the keys to the Manhattan unit that she “won” in a housing lottery back in 2000. It truly felt like she hit the jackpot. Out of 15,000 people who entered the lottery, she was among the 5 percent who got selected. She and husband, Edwin, who works as a website developer and photographer, now live in a price-stabilized co-op in Midtown, which means that for as little as one-third of current market rates, the Ochoas own a piece of Manhattan real estate in an enviable neighborhood that is walking distance to mass transit, rows of restaurants, and Madison Square Garden.

“I’m happy in my building,” said Ochoa when interviewed by The FilAm. She now works as a budget manager at NYU College of Dentistry’s Finance Department. “I’m close to everything.”

Ochoa is a resident of Penn South, a cluster of 10 co-op buildings in Chelsea stretching from West 23rd to West 29th streets between 8th and 9th avenues. Her building, with more than 160 units, stands in the middle of a garden that is a refuge from the frenetic pace of New York City. She is one of hundreds of thousands of New Yorkers who live in housing whose prices or rents are stabilized.

Penn South, according to the official handbook, a limited-equity co-op owned by the occupants who live there, was built in the 1960s to provide housing for unionized workers in the garment industry. It is one of several housing programs in the city that offer affordable rates to New Yorkers across the five boroughs.

Rebecca Sucgang Ocampo, a communications specialist, also feels fortunate to be living in affordable housing. Ocampo lives in a rent-regulated apartment on Roosevelt Island, a strip of land lying in the East River with Manhattan on one side and Queens on the other.

She and her 92-year-old mother have been living in one of the island’s buildings for 26 years. While her rent remains below market rate, Ocampo shares the apprehension of many of the island’s 15,000 residents that gentrification may be headed their way. Her landlord has the option to privatize and sell the units to the original tenants, like Rebecca, or to outsiders at prices yet to be determined. 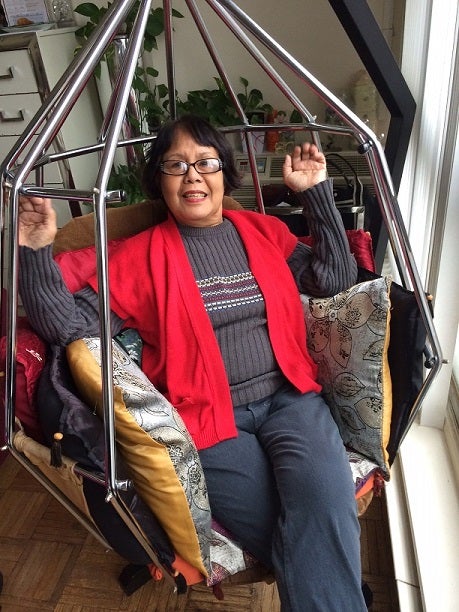 Rebecca Sucgang Ocampo of Roosevelt Island: “Over-gentrification should be addressed.” THE FILAM

“Roosevelt Island was originally set up as a moderate- to middle-income community,” she said, “but we are now looking at an increasingly fast gentrification.” She was talking about the proliferation of high rise apartment buildings on the island with a starting rent of $2,500 for a one-bedroom.

Filipino Americans like Ochoa and Ocampo are among the New Yorkers who have lucked out and found themselves living in affordable and regulated apartments where the cost of housing is insulated from the mood swings in the economy.

Despite the bitter reality that cost of living in New York City can be expensive, many still want to come here, Mayor Bill de Blasio noted when he launched his affordable housing program early in his term.

In a report called “Housing New York: A Five-Borough Ten-Year Plan,” he pointed to the “desirability” of New York as a place to call home. He said New York, with its “unparalleled diversity, allows people from every imaginable background to live and work side by side, share aspects of their cultures, exchange ideas, then mix, match, and innovate to generate the art, literature, fashion, technology, and conceptual breakthroughs that are the envy of the world.”

Market-rate rent for a studio apartment in Manhattan begins at $2,500 a month, according to a recent report from property company Douglas Elliman, which concludes that one needs to earn more than $100,000 to be able to afford a studio apartment.

To protect some residents from these market forces, the city has been investing in housing programs for low- to moderate-income families since the 1950s. Today, small colonies of “privately-owned, publicly subsidized” apartments and co-ops like Penn South dot the city, but demand for these dwellings far outstrips supply.

Low-interest loans and tax incentives were given to owners of vacant and foreclosed buildings in exchange for developing them for low-income tenants. At least two types of rental regulations emerged. As defined by the New York State website, “an apartment occupied by a tenant continuously prior to July 1, 1971 in a building built before February 1, 1947 would come under Rent Control. A Rent-Stabilized apartment would generally be located in a building constructed prior to January 1, 1974 having six or more housing units.”

It is easy to understand why Ochoa and Ocampo consider themselves very lucky to be living in the same city where they work, while some endure the daily commute from their homes in New Jersey or Connecticut to the city.

In the report “Housing New York: A Five-Borough Ten-Year Plan,” De Blasio outlined his roadmap to addressing the “housing crisis” through the construction and preservation of 200,000 units of housing.

His administration plans to identify vacant or underused sites and develop them into housing. Part of its approach also seeks to protect tenants from harassment by landlords plotting to evict renters so they can raise rent.

As of 2011, rent-regulated apartments numbered 1,025,214, or 47 percent of the city’s total rental housing stock, according to a study by the Furman Center for Real Estate and Urban Policy of NYU.

Of that figure, 38,000 are rent-controlled and 986,840 are rent-stabilized units, the rest representing other types of public housing.

Ochoa had heard about price-stabilized housing from her cousin. The housing lottery at the Penn South property in Chelsea only opens up every 10 years, so she wasted no time in sending in a postcard. After a few months, she got a letter from Penn South that she “won” a slot in the housing lottery and would be put on a waiting list.

She sent her application with a $200 non-refundable deposit as confirmation of her interest to move forward. It would be another seven years before she would hear from the housing company that she was nearing the top of the waitlist and to prepare for a meticulous background check.

“I was still single then so I could choose from a studio or a one-bedroom. I decided to go for the one-bedroom,” she said. She was given the chance to view 15 different apartments before she settled on her current apartment in Building 4. She is now married and continues to live in the same co-op unit for which she paid an amount “way below” market price.

“Let’s just say that for co-op units around my neighborhood asking for upwards of $500 K, mine is way below market price,” she said.

The Penn South website states that as of September 1, 2011 apartments in the complex known as “mutual redevelopment houses,” cost approximately $19,800 a room. “As an example, a 3.5 room apartment (one bedroom, living room, kitchen and dining area) would cost $69,300.”

The state sets maximum resale prices, and Ochoa would not benefit from “flipping.” But, she stressed, “I am not going anywhere. Though the cost of living is higher than in the other boroughs, savings from our housing expense allows us to explore New York City more freely.”

There are a few restrictions for owners at Penn South: Tenants wishing to renovate need to submit detailed plans and must maintain, for instance, similar tiles in bathrooms. And, says Ochoa, she needs building approval even to hang a painting.

“To drill a hole, you have to ask permission,” she said.

Ocampo, a Roosevelt Island pioneer, believes housing cost should not exceed 30 percent of the household gross income. Beyond that, she said, “A household will have difficulty affording other essential necessities such as food, medical care, clothing, and transportation.”

She said efforts to provide affordable housing should co-exist with attempts to address the challenge of “over-gentrification through luxury rentals and condominiums.”

Overall, she is pleased with her two-bedroom apartment overlooking the gleaming East River in the morning. The community is self-contained and boasts its own downtown restaurants, Post Office, and public library.

This article was written as part of the Business Reporting Fellowship of the Center for Community and Ethnic Media and funded by a grant from News Corp.