Tua Tagovailoa suffered a concussion, but nothing “more serious,” Miami Dolphins head coach Mike McDaniel said after the quarterback was taken from the field on a stretcher following a sack during Thursday’s game against the Cincinnati Bengals.

The 24-year-old was sacked by Josh Tupou in the first half and appeared to hit the back of his head on the turf. He stayed on the ground for a few minutes as trainers attended to him before he was carried off the field.

The Dolphins said he had been taken to hospital with head and neck injuries. 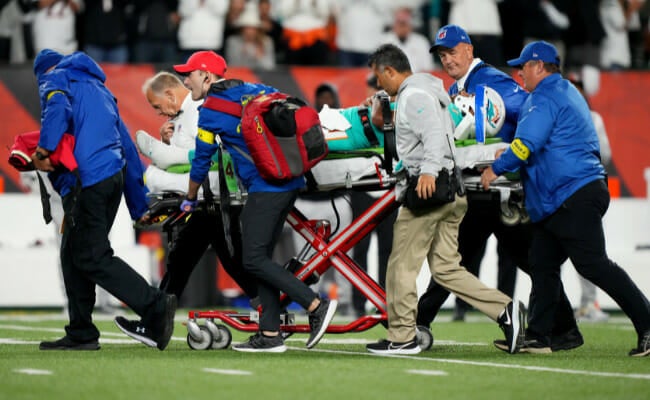 “It was a scary moment,” McDaniel told reporters. “He was evaluated for a concussion and is in the concussion protocol. He was at the hospital, and I believe he is about to get discharged.

“All of his teammates and myself, we were all very concerned, so the best news that we could get is that everything’s checked out, that he didn’t have anything more serious than a concussion.

“He will be flying back with us here on the plane.” The Dolphins lost the game 27-15 for their first defeat of the season. 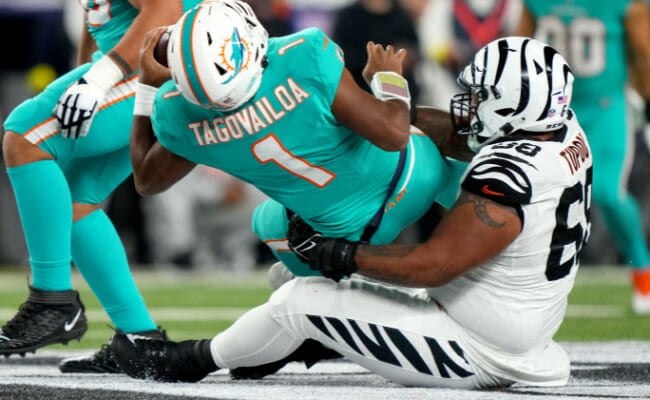 Tagovailoa was also evaluated for a concussion on Sunday during the Dolphins’ win over the Buffalo Bills. He looked unsteady as he left the field but passed the league-mandated concussion protocol at halftime and was allowed to return to the game. He was not placed in the concussion protocol.

The NFL Players Association said after Sunday’s game it was initiating an investigation into the handling of the concussion evaluation, while the NFL said a review was ongoing, but every indication was that proper protocol had been followed.

“Player health and safety are at the core of the union’s mission. Our concern tonight is for Tua, and we hope for a full and speedy recovery,” the NFLPA said on Thursday. “Our investigation into the potential protocol violation is ongoing.”