Former President Barack Obama and his wife, former first lady Michelle Obama, returned to the White House on Wednesday to unveil their official portraits in an event punctuated by wisecracks but tinged with history and politics.

Hosted by fellow Democrat President Joe Biden more than five years after Obama left office, the Obamas basked in applause from former staff members assembled in the East Room and lauded the artists for capturing their images, which will hang in the White House for generations to come.

Artist Robert McCurdy put Barack Obama, wearing a black suit and a gray tie, at the center of his canvas in a photorealistic portrait with a white background.

The former first lady is pictured in a blue dress in the White House’s Red Room, in a painting by Brooklyn artist Sharon Sprung.

The event was a reunion of sorts for Obama administration officials and for the Obamas and Bidens, who grew close during the eight years Biden served as Obama’s vice president. 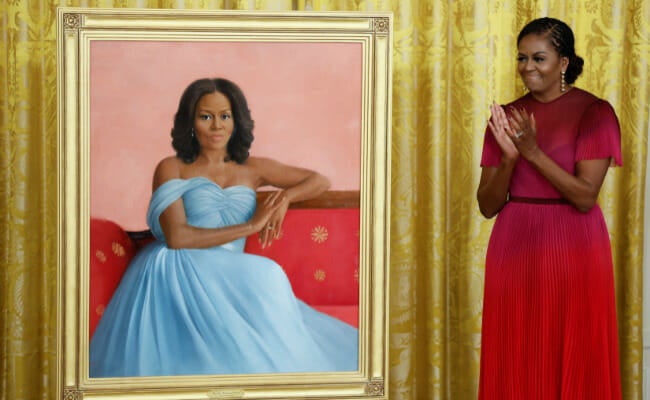 “There are few people I’ve ever known with more integrity, decency, and moral courage than Barack Obama,” Biden said at the beginning of the ceremony. “Nothing could have prepared me better or more to become president of the United States than being at your side for eight years.”

Customarily, a former president returns for the unveiling during his successor’s tenure, but a ceremony for the Obamas did not take place during Republican President Donald Trump’s administration.

Trump, before winning the 2016 election and succeeding Obama, pushed the “birther” movement that falsely suggested Obama was not born in the United States.

Obama, the first Black U.S. president, thanked Biden, his vice president between 2009 and 2017, for building on the work they did together.

“Thanks to your decency and thanks to your strength, maybe most of all thanks to your faith in our democracy and the American people, the country’s better off than when you took office and we should all be deeply grateful for that,” Obama said. 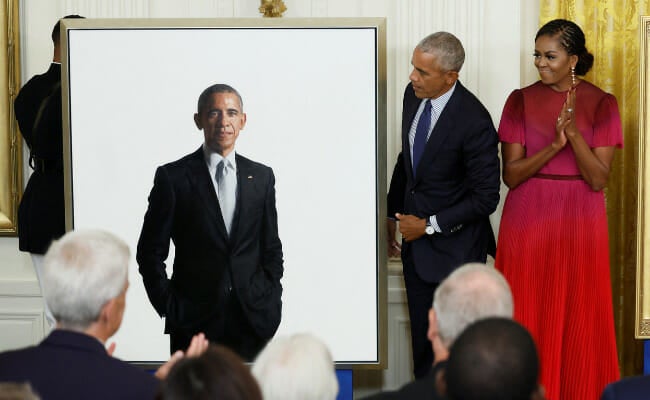 He also thanked his former staff, many of whom are now working at the White House with Biden, but joked that none had named a new child “Barack” or “Michelle.”

McCurdy’s hyper-realistic painting of the former president recalls portraits he has done of author Toni Morrison and South African leader Nelson Mandela. The artist “refused my request to make my ears smaller,” Obama quipped. “He also talked me out of wearing a tan suit,” he added to laughter, a reference to an unusual 2014 wardrobe choice that dominated Washington’s news cycle for days.

Michelle Obama said traditions like the portrait ceremony were important for people watching and participating in a democracy, and she appeared to reference the refusal of Trump to accept the results of the 2020 election, in which Trump was defeated by Biden.

“You see the people, they make their voices heard with their vote. We hold inauguration to ensure a peaceful transition of power,” she said. “Once our time is up, we move on.”

The first Black first lady of the United States also reflected on her unlikely journey to the White House.

“Because as Barack said if the two of us can end up on the walls of the most famous address in the world … it is so important for every young kid who is doubting themselves to believe that they can, too,” she said.

The Obamas did not mention Trump by name, and an Obama spokesperson declined to comment on the timing of the unveilings. Obama had hosted former Republican President George W. Bush and his wife, Laura, for their portrait unveilings in 2012.

“It’s really up to the current president in the White House and the former president that is portrayed in the portrait to determine the right moment, but there is no set timeline,” said Stewart McLaurin, president of the White House Historical Association, the private, non-profit organization that commissions the official portraits of the president and first lady.

Earlier portraits of the Obamas that were unveiled in 2018 and placed in the Smithsonian’s National Portrait Gallery in Washington have become a major tourist draw.

Obama has been back at the White House once since leaving office, joining Biden in April for an event to tout his signature healthcare law, known as Obamacare.