When the credits showed up on the Darren Aronofsky drama, ‘The Whale’, Brendan Fraser was overwhelmed with happiness. On Sunday night, the movie’s world premiere was held at the Venice Film Festival. The actor’s comeback for a major role was welcomed with lots of applause and even sobs.

Actor Brendan Fraser had his major breakthrough roles in The Mummy (1999) and George of the Jungle (1997). He also starred in the sequels of the Mummy: Tomb of the Dragon Emperor (2008) and The Mummy Returns (2001).

Fraser’s role as a 600-pound gay man confined in a wheelchair is a major comeback for him. He played Charlie who is also an English teacher trying to make amends with his teenage daughter.

There are far too many cheeses. Cool it dairy people, I can’t keep up. I don’t like Swiss cheese.

The Whale lead actor was about to exit the stage when the audience beside him started a round of applause. People onstage and the whole crowd gave him a six-minute standing ovation. Which will up his chances for this year’s Oscars race.

Furthermore, Fraser also hugged Director Aronofsky during the ovation. He already tried to leave but the continuous outpouring of applause was so loud. Fraser stayed longer and bowed.

As the video of the six-minute standing ovation and Fraser sobbing circulated online, it also caught the attention of some of the big names in Hollywood. Particularly Dwayne “The Rock” Johnson. He tweeted, “He supported me coming into his Mummy returns franchise for my first ever role, which kicked off my Hollywood career.”

Man this makes me so happy to see this beautiful ovation for Brendan. He supported me coming into his Mummy Returns franchise for my first ever role, which kicked off my Hollywood career. Rooting for all your success brother and congrats to my bud Darren Aronofsky. #TheWhale 👏🏾 https://t.co/SNBLPHHmEZ

Some of the other celebrities present in the Sala Grande Theatre were Nick Kroll, Phoebe Waller-Bridge, and Hillary Clinton staff Huma Abedin. They were seated a few rows behind Fraser. They were caught on cam also breaking into tears as ‘The Whale’ actor did. Other attendees inside the grand theater also brought out their handkerchiefs while watching the heartbreaking scenes of the film.

Although this new film is nothing similar to his adventurous stunts in The Mummy franchise, it still required his immense efforts. Fraser needs to wear a prosthetic suit that added nearly 300 pounds to achieve the physiques of the lead character. He also seats on his make-up chair for 6 hours each day to fully get the entire look.

In an interview before the Venice premiere, Fraser said that his suit was “cumbersome, not exactly comfortable.” He also shared, “The torso piece was almost like a straight jacket with sleeves that went on, airbrushed by hand, to look identical as would human skin, right down to the hand-punched chair.

Fraser also shared at the Venice press conference the effects of wearing the prosthetic suit. “I developed muscles I did not know I had. I even felt a sense of vertigo at the end of the day when all the appliances were removed. It was like stepping off the dock onto a boat in Venice” 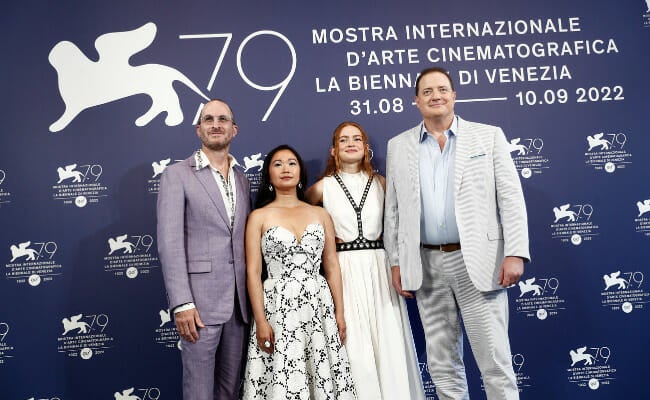 He also added, “That sense of undulating. It gave me an appreciation for those whose bodies are similar. You need to be an incredibly strong person, mentally and physically, to inhabit that physical being.”

His previous roles in the complete franchise of The Mummy took a huge physical toll on him. He had undergone a series of surgeries due to the stunt works he did for the movies.  He had to undergo a laminectomy. It is a procedure for removing vertebrae from the spine.

Moreover, he also had a vocal cord repair and partial knee replacement. The Mummy actor also thought if the Hollywood Foreign Press Association blacklisted him. The organization is the main host of the Golden Globes. This might be due to Fraser’s allegation against a former HFPA president whom he said had groped him in 2003.

Moreover, Brendan Fraser has still so much to look forward to. He’ll be one of the actors in Behind the Curtain of Night. In addition, he had upcoming roles with Peter Dinklage and Glenn Close in Brothers. He’ll also have a role alongside Leonardo DiCaprio and Robert De Niro in a Martin Scorsese film, Killers of the Flower Moon.