The defense team of Brittney Griner, the U.S. basketball star jailed for nine years in Russia on drugs charges, appealed on Monday against her conviction for narcotics possession and trafficking.

Griner was convicted on Aug. 4 in a verdict that U.S. President Joe Biden called “unacceptable”. Washington says she was wrongfully detained and has offered to exchange her for Viktor Bout, a Russian arms dealer serving a 25-year prison sentence in the United States.

Monday was the deadline for Griner to contest the verdict. Maria Blagovolina, the partner at Rybalkin Gortsunyan Dyakin and Partners law firm, told Reuters the appeal had been filed but declined to comment further.

Griner, a two-time Olympic gold medallist who had played for a Russian club, was arrested at Moscow’s Sheremetyevo airport on Feb. 17 after cannabis-infused vape cartridges were found in her luggage.

She pleaded guilty to the charges but said she had not meant to break the law. “I made an honest mistake and I hope that in your ruling, that it doesn’t end my life here,” Griner told the court at Khimki, near Moscow, at her sentencing. 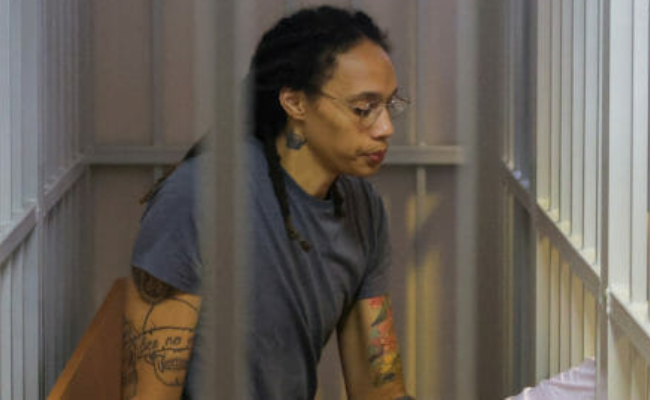 U.S. basketball player Brittney Griner, who was detained at Moscow’s Sheremetyevo airport and later charged with illegal possession of cannabis, sits inside a defendants’ cage after the court’s verdict in Khimki outside Moscow, Russia August 4, 2022. REUTERS/Evgenia Novozhenina/Pool

It was not clear how soon an appeal could be heard.

“We demand to overturn the verdict passed by the Khimki court and impose a new sentence,” Alexander Boikov, a lawyer at Moscow Legal Center who represented Griner in court, told Reuters.

He said the appeal would be mainly based on alleged violations in the course of the investigation. Griner’s defense team argued in court that some of her case files had been drawn up without being translated for her into English.

The athlete was caught up in a geopolitical storm when Russia sent troops into Ukraine a week after her arrest and the United States and its allies responded with unprecedented waves of sanctions against Moscow.

Russia denies that the case was politically motivated. It has warned the United States against engaging in “megaphone diplomacy” and warned that any prisoner swap would have to be negotiated in private.

In a Telegram post on Monday, Russian Foreign Ministry spokeswoman Maria Zakharova took issue with the White House’s public criticism of the Russian court verdict. She contrasted that with its silence over last week’s FBI raid on the property of former president Donald Trump, of which a White House spokeswoman said Biden had not been aware.

“Let me remind you, Griner was smuggling cartridges of liquid for smoking, which contained hashish oil. The basketball player herself admitted this since there was no point in denying it,” Zakharova said.

“At the same time, the White House refuses to comment on the investigation around Trump and the seizure of certain documents related to the White House from him. Complete silence, although we are talking about American justice and law enforcement.”