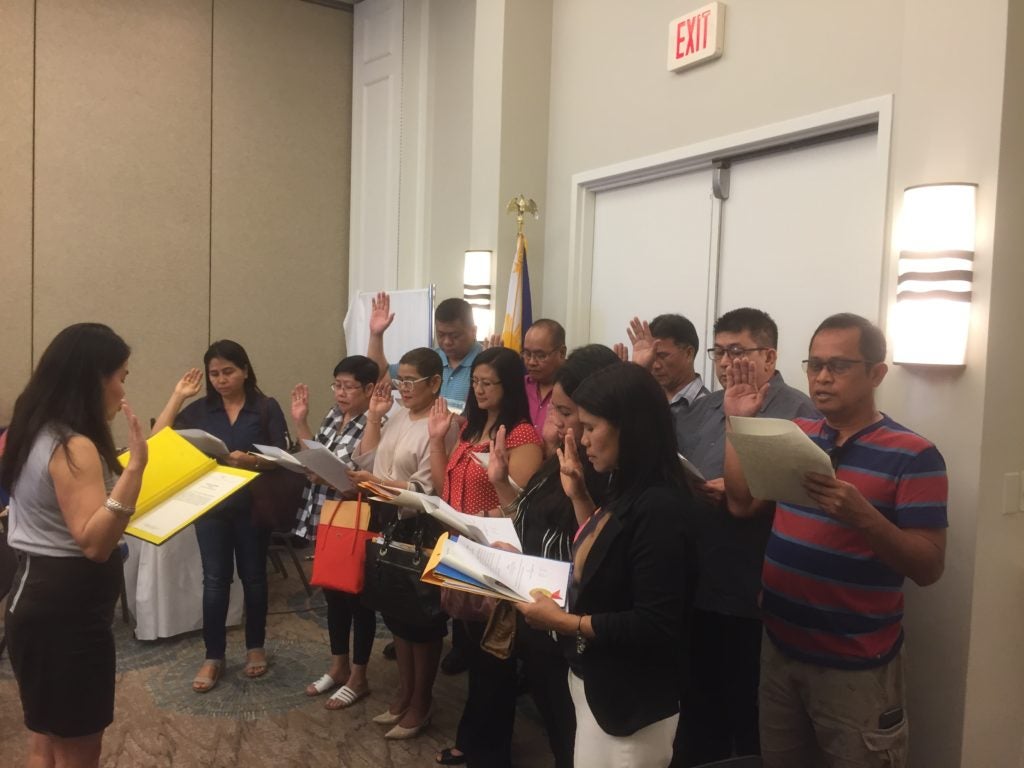 Consul Katrina Isabelle Borja-Martin administers the Oath of Allegiance to former Filipinos seeking to re-acquire their Filipino citizenship under Republic Act 9225 during the three-leg visit to the Caribbean territories. CONTRIBUTED

WASHINGTON, D.C. – A three-leg visit by a Philippine Embassy team to the Caribbean territories of Turks and Caicos Islands, Cayman Islands, and the Bahamas from February 24 to March 5 delivered passport and other consular services to Filipinos in these places.

A total of 1,676 consular services were rendered during the consular outreach mission. Over 92 percent of this total was for passport-related services. In addition, 1,085 eligible voters were registered for overseas absentee voting. Consul Katrina Isabelle Borja-Martin (second from left) meets with Clarence Alexander Russell II, Director of Bahamas Immigration (third from left), together with two leaders of the Filipino community in the Bahamas. CONTRIBUTED

There are an estimated 8,000 Filipinos in these islands, most of whom are employed in the medical, pharmaceutical, finance, and hospitality industries, as well in the households of locals, and expatriates.

The consular outreach team was composed of representatives from the consular section, the Philippine Overseas Labor and Welfare Office (POLO-OWWA), and overseas voting division.

The outreach team leader, Consul Katrina Isabelle Borja-Martin, said that during separate calls made on Dr. John Freeman, Governor of Turks and Caicos Islands, and Clarence Alexander Russell II, Director of Bahamas Immigration, both officials expressed their high regard for the positive contributions of the Filipino community in their respective societies.