Fight to lessen asbestos use continues

Fight to lessen asbestos use continues 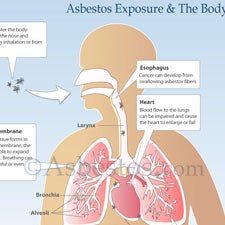 Debate surrounding worldwide asbestos use has been raging for decades, but despite knowing the dangers asbestos poses, the number of countries actually taking action is still surprisingly low.

About 60 countries have taken steps to ban asbestos, a naturally occurring mineral closely tied to diseases like asbestosis and mesothelioma, stopping both imports and exports.

But even with countries slow to take action, the worldwide community at-large is reducing asbestos consumption in favor of safer alternatives.

For example, asbestos use in the United States has seen a drastic decline since 1973 when consumption hit a high of more than 800,000 tons. Today, according to the United States Geological Survey (USGS), consumption has fallen to an estimated 300 tons and is almost entirely attributed to the chlor-alkali industry, which uses asbestos to make semipermeable diaphragms used during chemical manufacturing.

The trend in the U.S. follows a similar trajectory globally as worldwide consumption fell from an estimated 2 million in 2010 to 1.4 million tons in 2016. The decline coincides with an increase in government regulations to protect public health and a variety of safer materials and minerals that can substitute for asbestos in manufactured products.

Public health organizations around the world, including the World Health Organization (WHO), have called for asbestos use to be phased out for years, suggesting that exposure to airborne fibers may eventually lead to complications.

According to WHO statistics, an estimated 125 million people globally are exposed to asbestos in the workplace, and roughly half of all deaths from occupational cancer are thought to be caused by the mineral. It’s also be estimated that roughly 43,000 people die each year from mesothelioma, which is largely considered to be an entirely preventable cancer.

Asbestos is considered relatively safe when the fibers are contained inside products that are undamaged and in good shape. But if the mineral is in its raw state or if fibers are released from damaged products, they can pose a significant health threat.

If someone handling asbestos products accidentally breathes the fibers in, they can become trapped in the lining of the lungs and possibly lead to tumors over time, potentially resulting in pleural mesothelioma.

In other cases, fibers may travel through the body into the linings of the heart or abdomen, causing pericardial or peritoneal mesothelioma, which are less common but offer similar treatment options, including surgery, chemotherapy and radiation.

While those working closely with asbestos are encouraged to take proper precautions to avoid unnecessary exposure, the WHO states that the only real way to eliminate asbestos-related diseases is to avoid its usage entirely.

The world is taking notice of what global health organizations like the WHO are saying, and in recent years more countries have made moves to ban asbestos use.

In late 2016, Canada promised to ban asbestos use in 2018, and has largely stuck to its word by putting forth measures to stop the use, import and export of asbestos and products containing the mineral.

Brazil, one of the largest exporters of the mineral and third in exports behind China and Russia, is also banning asbestos usage and sales following a landmark vote by the country’s Supreme Federal Court. Barring any legal action, Brazil’s moves provide those hoping for an asbestos-free future with some optimism.

In the U.S., the Environmental Protection Agency has started a second evaluation of asbestos with the goal of determining its risk to public health. The agency issued a report in June 2017 offering some information into the study, and is slated to issue a second document sometime soon.

Despite concerns about the current administration’s stance on the issue, there is cautious optimism that the current evaluation will eventually lead to a complete phase out in the coming years.

The Philippines has also been involved in the push to halt asbestos use through legislation. In 2000, several types of asbestos were banned in the country as part of the Chemical Control for Asbestos Act, though chrysotile asbestos was not included in the law and restrictions were put into place to limit its inclusion in manufactured products.

In 2014, former Sen. Miriam Defensor Santiago introduced the Ban Asbestos Act meant to phase out its use, sale and importation but the measure was sent to committee and was never voted on.

There are a wide variety of minerals and other materials on the market now, like carbon fiber, perlite and membrane cell technology that provide similar benefits as asbestos, but are much safer to use and are, in some cases, similarly priced.

While it will still be a long time before the world moves on from asbestos entirely, seeing major countries take big steps to reduce and eliminate their reliance on asbestos has brought a renewed hope and spark to the cause.

Charles MacGregor is a health advocate specializing in mesothelioma, a rare cancer impacting the lives of nearly 3,000 people annually in the United States. He works to raise awareness about the disease and advocate for an asbestos ban in the U.S.