Shifting US abortion landscape: What you need to know

Shifting US abortion landscape: What you need to know

Meanwhile, Democratic-led states are trying to pass legislation that would strengthen protections for abortion providers and patients, anticipating an influx of women seeking to terminate pregnancies from abortion-hostile states.

Here are the latest legal and legislative developments in the shifting U.S. abortion landscape:

* In Ohio, Planned Parenthood and the Center for Reproductive Rights on Wednesday sued to block the state from enforcing a ban on abortions past six weeks of pregnancy. The ban went into effect on Friday when a federal judge lifted an order that had blocked the law for three years on the grounds that it was unconstitutional. Abortion rights demonstrators hold up signs and drum against the the windows of Denton City Hall while police watch from the inside as Denton’s city council meets to vote on a resolution seeking to make enforcing Texas’ trigger law on abortion a low priority for its police force, in Denton, Texas, U.S. June 28, 2022. REUTERS/Shelby Tauber

Judges in Texas, Utah, and Louisiana have granted temporary injunctions on abortion bans in those states since the U.S. Supreme Court’s abortion ruling on Friday.

* The Massachusetts House of Representatives on Wednesday voted 136 to 17 to protect healthcare workers who provide abortions and gender-affirming care in a bill that would also bar state agencies from complying with federal or other states’ attempts to prosecute Massachusetts health providers. The bill now goes to the Senate, where the Democrats hold an advantage of 37 to 3.

* In Kentucky, Jefferson Circuit Judge Mitch Perry heard rights advocates make their case that the state constitution protects the right to end a pregnancy. He will decide whether to block the enforcement of the state’s six-week ban and trigger the law, which shut down abortion services last Friday after the high court’s ruling. 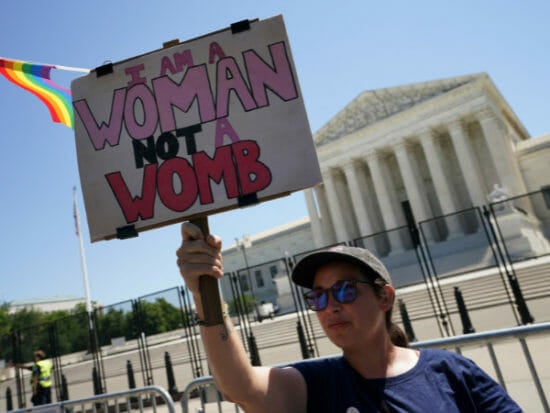 An abortion rights supporter holds up a protest sign in front of the U.S. Supreme Court in Washington, D.C., U.S., June 29, 2022. REUTERS/Kevin Lamarque

* In Florida, the Second Judicial Circuit Court scheduled a hearing for Thursday in Planned Parenthood’s case to block the state from enforcing a ban on abortions past 15 weeks. The law is due to take effect on Friday.

* In West Virginia, the state’s only abortion clinic and its staff filed a lawsuit in state court to block the enforcement of a pre-Roe ban, which has forced the clinic to cease abortion services since Roe was overturned.

* The Supreme Court as soon as Thursday morning could act on three cases that were on hold pending its decision to overturn Roe v. Wade.