What you need to know about monkeypox

What you need to know about monkeypox 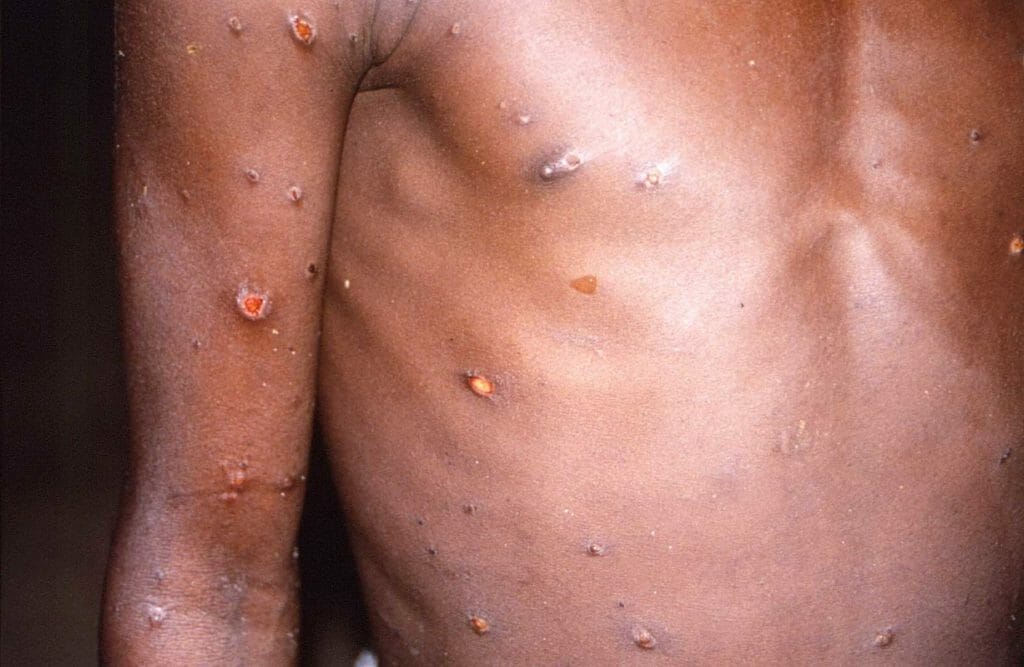 An image created during an investigation into an outbreak of monkeypox, which took place in the Democratic Republic of the Congo, 1996 to 1997, shows the arms and torso of a patient with skin lesions due to monkeypox. REUTERS

The World Health Organization said June 25 that monkeypox wasn’t yet a public health emergency of international concern. More than 4,500 cases have been reported worldwide, with more than 300 in the U.S. And with public health officials unable to follow all chains of transmission, they’re likely undercounting cases. Everyone should be aware of its symptoms, how it spreads, and the risks of it getting worse.

Q: Should I be worried about monkeypox?

The American public is currently at low risk for monkeypox. It is spreading among men who have sex with men, but it is only a matter of time before it spreads to others. As of June 27, the European Centre for Disease Prevention and Control had reported 10 cases among women. Monkeypox is generally a mild disease but can be serious or even deadly for people who are immunocompromised, pregnant women, a fetus or newborn, women who are breastfeeding, young children, and people with severe skin diseases such as eczema.

But monkeypox could become endemic in the U.S. and around the world if it continues to spread unchecked.

Q: How does monkeypox spread?

Monkeypox is a viral infection, a close cousin of smallpox. But it causes a much milder disease.

It is transmitted through close contact, including sex, kissing, and massage — any kind of contact of the penis, vagina, anus, mouth, throat, or even skin. In the current outbreak, monkeypox has primarily been transmitted sexually.

Condoms and dental dams will reduce but won’t prevent all transmission because they protect only against transmission to and from the skin and mucosal surfaces that are covered by those devices. It’s important to know that the virus can enter broken skin and penetrate mucous membranes, like in the eyes, nose, mouth, genitalia, and anus. Scientists don’t know whether monkeypox can be transmitted through semen or vaginal fluid.

It is not known whether monkeypox can be transmitted when someone doesn’t have symptoms.

Q: What are the common symptoms of monkeypox?

Symptoms of monkeypox may develop up to 21 days after exposure and can include fevers and chills, swollen lymph nodes, rash, and headaches.

It is not known whether monkeypox always shows any or all of those symptoms.

Experts currently think monkeypox, like smallpox, will always cause at least some of these symptoms, but that belief is based on pre-1980 science, before there were more sophisticated diagnostic tests.

The monkeypox rash usually starts with red spots and then evolves into fluid-filledand then pus-filled bumps that may look like blisters or pimples. The bumps then open into sores and scab over. People with monkeypox should be considered infectious until after the sores scab over and fall off. Monkeypox sores are painful. The rash was often seen on palms and soles in the past, but many people in this outbreak have experienced external and internal lesions of the mouth, genitalia, and anus. People may also experience rectal pain or the sensation of needing to have a bowel movement when their bowels are empty.

Q: How do I get tested for monkeypox?

Q: Is there a vaccine for monkeypox?

The Jynneos vaccine is safe. It has been tested in thousands of people, including people who are immunocompromised or have skin conditions. Common side effects of the Jynneos vaccine are similar to those of other vaccines and include fevers, fatigue, swollen glands, and irritation at the injection site.

Q: Can I be vaccinated against monkeypox?

The Centers for Disease Control and Prevention currently recommends vaccination against monkeypox only for those at heightened risk: people who have had close contact with someone with monkeypox; men who have sex with men and trans women who have recently had multiple sex partners in a venue where there was known to be monkeypox or in an area where monkeypox is spreading; and some health care workers, laboratory staffers, first responders, and members of the military who might come into contact with the affected.

Supplies of the Jynneos vaccine are currently limited. The U.S. Department of Health and Human Services’ Office of the Assistant Secretary for Preparedness and Response will release 56,000 doses from the strategic national stockpile immediately. An additional 240,000 doses will be made available in the coming weeks, 750,000 doses later this summer, and 500,000 this fall, for a total of more than 1.5 million doses.

Q: What are other ways to lower the risk of monkeypox transmission?

The best way is to educate yourself and your sex partners about monkeypox. If you’re worried you might have monkeypox, get tested at a sexual health clinic. Many emergency rooms, urgent care centers, and other health care facilities may not be up to date on monkeypox. The CDC link to find the nearest sexual health clinic is https://gettested.cdc.gov/.

Abstain from sex if you or your partner has monkeypox. And remember that condoms and dental dams can reduce but not eliminate the risk of transmission. The CDC also warns about the risk of going to raves or other parties where lots of people are wearing little clothing and of saunas and sex clubs. It has other suggestions like washing sex toys and bedding.

Q: Is there a treatment for monkeypox?

There is no proven, safe treatment specifically for monkeypox. Most cases of monkeypox are mild and improve without treatment over a couple of weeks. Medications like acetaminophen and ibuprofen can be used to reduce fevers and muscle aches, and medications like acetaminophen, ibuprofen, and opioids may be used for pain. In rare cases, some patients — such as immunocompromised people, pregnant women, a fetus or newborn, women who are breastfeeding, young children, and people with severe skin diseases — will develop more severe illness and may require more specific treatment. Doctors are trying experimental therapies like cidofovir, brincidofovir, tecovirimat, and vaccinia immune globulin. If administered early in the course of infection, the Jynneos and ACAM2000 vaccines may also help reduce the severity of disease.

Q: What misinformation is circulating about monkeypox?

Conspiracy theories about monkeypox abound. Monkeypox is not a hoax. Monkeypox is real. Covid vaccines can’t give you monkeypox. Monkeypox was not invented by Bill Gates or pharmaceutical companies. Monkeypox didn’t come from a lab in China or Ukraine. Migrants crossing the U.S.-Mexico border haven’t brought monkeypox into the U.S. Monkeypox isn’t a ploy to allow for mail-in ballots during elections. There is no need for a monkeypox vaccine mandate or lockdowns due to monkeypox.