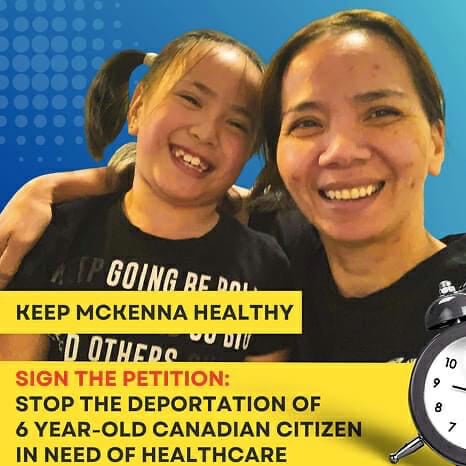 More than 2,000 people have signed a petition calling for Evangeline Cayanan, seen here with daughter, McKenna Rose, to be given permanent resident status. HANDOUT

A Filipina who came to Edmonton, Canada as a temporary foreign worker in 2011 and later won a human-rights award for her advocacy work is set to be deported in July, and her six-year-old Canadian-born daughter would have to leave with her.

Evangeline (Vangie) Cayanan worked as a temporary foreign worker (TFW) in the restaurant industry. Since her application for another work permit was denied she has been residing without status. Her daughter, McKenna Rose, was born in Canada in 2015.

Cayanan has sought all legal means to be able to stay but failed. A legal challenge deferred her original deportation date from May to July, when a final decision on her case is expected.

Now, more than 2,000 people have signed a petition calling for her to be given permanent resident status.

In 2017, Cayanan and others successfully campaigned to secure health-care access for and other children of non-status parents in Alberta, for which she was given a Human Rights Award from the John Humphrey Centre for Peace and Human Rights, using the alias “Lynn” at the time, according Taproot Edmonton.

McKenna Rose, a Canadian citizen by birth, has severe ADHD, and supporters fear that without the behavioral therapy she is receiving, and with the stress of being removed to the Philippines, her health will suffer.

“Vangie and McKenna are integral parts of our Edmonton community,” Edmonton-Griesbach MP Blake Desjarlais said in a letter to the Minister of Immigration, Refugees, and Citizenship. “They deserve permanent status and to remain in Canada. Our immigration policy must remain humane and sensitive to all.”

“It’s very complicated because Immigration would say, yes, the child is Canadian, and that she can stay,” Marco Luciano, the director of Migrante Alberta, was quoted by Taproot Edmonton. “But for a six-year-old child, going through foster care because the mom is deported is also not in the best interest of the child. Essentially, McKenna is being deported with her mom.”

Luciano said cases like Cayanan’s is common. Most undocumented migrants immigrate legally but lose their status due to problems with employers or changes to the Temporary Foreign Worker program.