Encircled by an ominous security fence and off-limits to the public since March 2020, the U.S. Supreme Court is poised in the coming weeks to issue a major ruling that could dramatically curtail abortion rights from behind closed doors with not a single justice in sight.

No members of the public have been allowed in the courthouse since COVID-19 pandemic precautions were implemented in March 2020. The scene at the court has become tenser following protests and threats against some of the nine justices prompted by the May leak of a draft opinion indicating they are set to overturn the landmark 1973 Roe v. Wade ruling that legalized abortion nationwide. The court has a 6-3 conservative majority.

The 8-foot (2.4 meters) tall fencing was erected in the days after the leak as the court ramped up security measures. 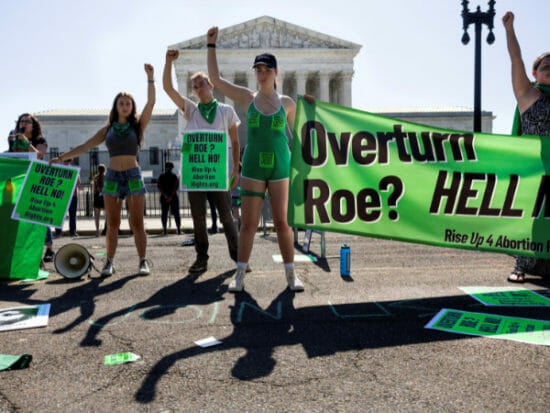 While the rest of official Washington, including other government buildings including the White House and Capitol, has reopened its doors to the public at least partially as the pandemic ebbs, the top U.S. judicial body remains in a form of lockdown with what appears to be siege mentality even as it wields huge influence over public policy.

For Guido Reichstadter, an abortion-rights protester camped out in front of the courthouse since the beginning of June, the fencing is a sign of how out of touch the justices – or at least the six conservative ones – are with public sentiment.

“They are trying to insulate themselves from the effects of their actions. Why else would you put a fence up?” Reichstadter asked.

Reichstadter was arrested on June 6 for locking himself to the fence by the neck and spent a night in jail.

“To me, it sends a message that they are weak, they are afraid, they are isolated,” Reichstadter said of the fence.

Emotions have run high since the Politico news organization published the draft abortion decision authored by conservative Justice Samuel Alito on May 2. 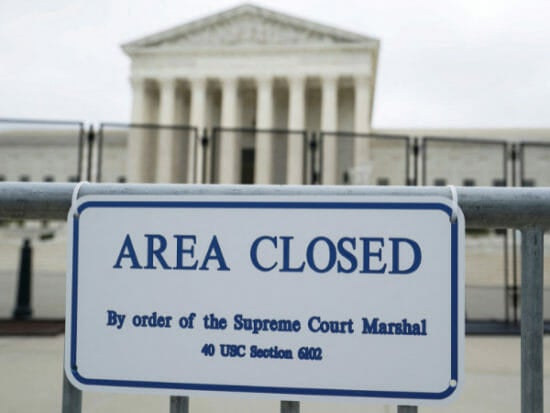 New security fencing is seen outside the U.S. Supreme Court as justices were scheduled to return for the first time since the leak of a draft majority opinion written by Justice Samuel Alito preparing for a majority of the court to overturn the landmark Roe v. Wade abortion rights decision later this year, in Washington, U.S., May 12, 2022. REUTERS/Kevin Lamarque/File Photo

Since then, protesters have rallied outside the homes of some of the conservative justices. A California man named Nicholas Roske, carrying a handgun, ammunition, a crowbar, and pepper spray, was charged with attempted murder after being arrested on June 8 near Justice Brett Kavanaugh’s Maryland residence.

Congress on Tuesday passed legislation to bolster security for the nine justices, though lawmakers did not include protections for the families of clerks and other Supreme Court employees due to Republican opposition.

After the leak, conservative Justice Clarence Thomas, known for his criticism of the Roe ruling, said on May 6 at a legal conference in Atlanta that the court should not be “bullied into giving you just the outcomes you want.”

Anti-abortion advocates are sympathetic to concerns about the safety of the justices, saying they also have received threats following the leak.

“I would say the court is protecting itself, protecting their employees,” said Kristan Hawkins, president of the group Students for Life.

The abortion ruling will come in a case involving a Republican-backed Mississippi law banning abortion after 15 weeks of pregnancy that was struck down by lower courts as a violation of the Roe precedent. The court also has 17 other cases to decide, with the term usually completed by the end of June, including rulings that could expand gun rights, favor Christian conservatives and limit the power of the federal government to combat climate change, among other issues. 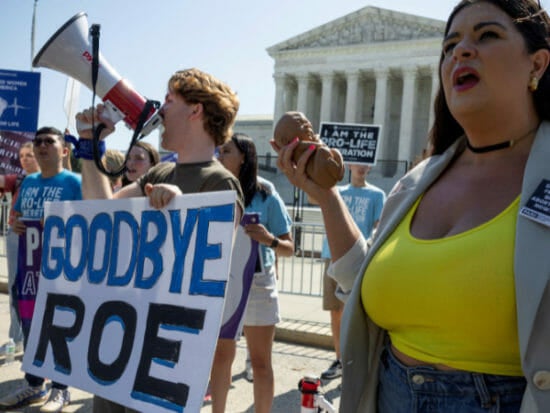 The court has emerged slowly from the pandemic. It resumed in-person oral arguments last October after holding remote arguments by teleconference for 18 months, but let only court staff, lawyers, and some reporters into the courtroom. Since the court completed oral arguments for the term on April 27, outsiders have been kept from the building.

One of the many changes in court practice instituted during the pandemic was issuing rulings only online, with no official court session. That means justices no longer read from the bench summaries of their rulings and dissenting opinions. It was previously an opportunity for justices who strongly disagreed with a ruling to passionately voice their views.

A court spokesperson did not respond to a question on why the justices have not resumed reading announcements from the bench. The court has not said when, or if, such sessions will resume. It has shown no signs of live-streaming audio of opinion announcements in the same way that audio of oral arguments has been provided.

Gabe Roth, executive director of Fix the Court, a group advocating for court reform, said there is no reason not to live stream decision announcements, noting it would be the equivalent of President Joe Biden holding a news conference in which he summarized a new executive order.

“It’s infuriating they are so resistant to change, but that’s kind of what they are known for,” Roth said of the court.