In his speech, McConaughey told the stories of the victims while pushing for urgent action on gun control policies. He also said that he and his wife Camila Alves spent time with the victims’ families these past few weeks.

McConaughey displayed photos of the children’s artwork. He even brought a green Converse to the briefing room. One girl wore that green Converse shoes every day, and the investigators used that shoes to identify her body after the shootout. The girl even drew a heart on one of the shoes. 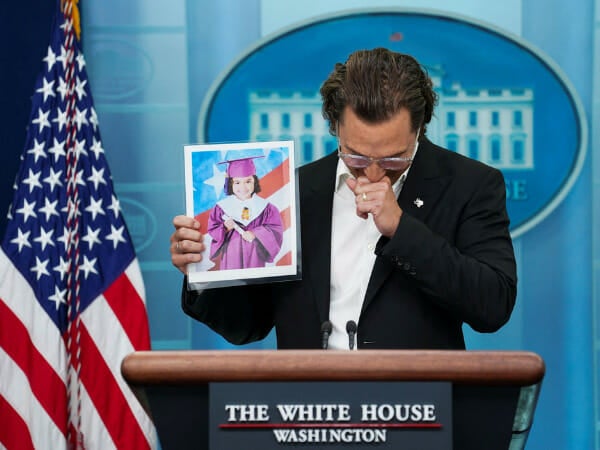 Actor Matthew McConaughey, a native of Uvalde, Texas as well as a father and a gun owner, becomes emotional as he holds up a picture of a young victim of the school shooting in Uvalde as he speaks to reporters about mass shootings in the United States during a press briefing at the White House in Washington, U.S., June 7, 2022. REUTERS/Kevin Lamarque

The actor, who frequently visits his hometown after the shootout, said he needed to tell the victims’ stories. This shows how much action is necessary to honor the lives lost at the Robb Elementary School shooting.

He also added that there’s a more extensive “window of opportunity” now to execute changes in the gun policy reform after the horrendous incident. He suggested tight universal background checks. It also includes increasing the average age for AR-15 purchases to at least 21 years old. Also, he called out for the practice of red flag laws.

Today, I had the privilege of welcoming @McConaughey to the US Capitol to discuss Congress’ efforts on gun violence prevention legislation. After the recent tragedy in his hometown of Uvalde, we agreed on the need for urgent action to save lives — especially for the children. pic.twitter.com/8eVpVDLUhJ

McConaughey also called out for the bipartisan action on mental health reform. Aside from stricter gun legislation, he also called out the consequences for those who violate gun laws.

He added, “There is a sense that perhaps there’s a viable path forward. Responsible parties in this debate seem to be at least committed to sitting down and having a real conversation about a new and improved path forward. This path can bring us closer together and make us safer as a country, a path that can be possible this time.”

In addition, McConaughey also highlighted the children’s dreams before the gunman killed them. One child dreams of going to an art school in Paris. While another one wanted to be a marine biologist. Another was preparing for a Bible reading at church the week after the shooting incident.

He also said, “Due to the exceptionally large exit wounds of an AR-15 rifle, most of the bodies so mutilated that only DNA test or green Converse could identify them. Many children were left not only dead but hollow. So, yes, counselors will be needed in Uvalde for a long time.”

Last year, the actor thought of running for governor in Texas. However, he brushed it off. He said that “it was not the path I’m choosing to take.”

McConaughey released a statement to the reporters at Capitol Hill on Tuesday. He hopes that he will achieve progress in his meetings with the state’s lawmakers. He came from a meeting with House Speaker Nancy Pelosi and met with House Minority leader Kevin McCarthy.

While the chances for any significant changes in the gun reforms seem blurry, some lawmakers are optimistic that a deal for a targeted bill is possible. Jean-Pierre said that Biden was “encouraged” by the negations about gun control policies.