The grieving Texas town of Uvalde begins laying to rest the 21 school children and teachers who were killed in a mass shooting at an elementary school a week ago, with two funerals scheduled Tuesday for two 10-year-old girls.

According to obituaries on the websites of Uvalde’s two funeral homes, Amerie Jo Garza was sweet, sassy, and funny, and loved swimming and drawing; Maite Yuleana Rodriguez was an honor student who loved learning about whales and dolphins and dreamt of becoming a marine biologist. Amerie’s funeral was set for Tuesday afternoon at Uvalde’s Sacred Heart Catholic Church and Maite’s in the evening at a Uvalde funeral home.

They were killed along with 17 other students, all aged 9 to 11, and two teachers by an 18-year-old gunman who burst into their fourth-grade classroom and opened fire with a high-velocity AR-15-style semiautomatic rifle. 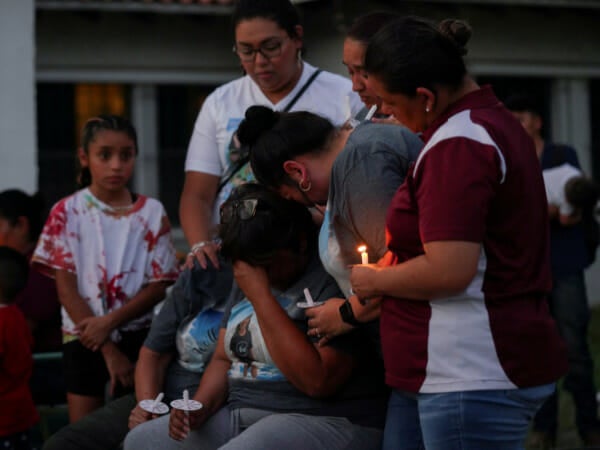 Relatives of Alexandria Aniyah Rubio ‘Lexie’ mourn her death during a vigil to remember the victims of the deadliest U.S. school shooting in nearly a decade resulting in the death of 19 children and two teachers, at a memorial at Robb Elementary School in Uvalde, Texas, U.S. May 30, 2022. REUTERS/Veronica G. Cardenas

Monday, artists raced to complete a mural depicting white doves on the side of the Ace Bail Bonds building, near the cemetery.

“Those kids were full of life and dreams,” said one of the artists, Yanira Castillo, 34, who has lived her entire life in Uvalde. “A town does not get over that. It will affect us forever.”

A series of funerals is scheduled for the next two weeks in the town of 16,000, which is nearly 80% Latino or Hispanic and largely Roman Catholic. Among those are services for the two teachers who died, Eva Mireles, 44, and Irma Garcia, 48.

Garcia’s husband, Jose Garcia, 50, died of a heart attack two days after the shooting. A joint funeral is planned on Wednesday for the couple, who met in high school and had four children. 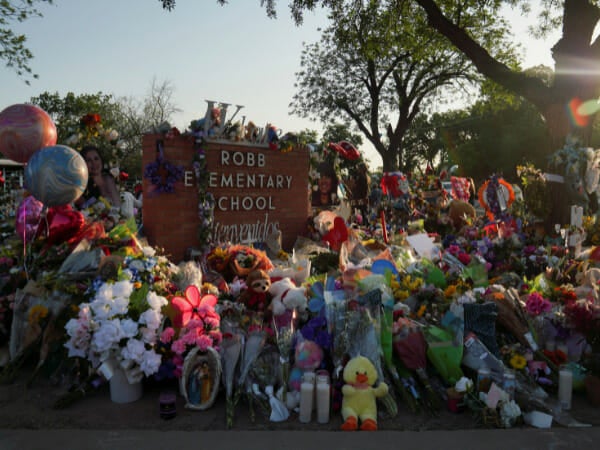 Flowers, toys, and other objects to remember the victims of the deadliest U.S. school shooting in nearly a decade resulting in the death of 19 children and two teachers, are seen at a memorial at Robb Elementary School in Uvalde, Texas, U.S. May 30, 2022. REUTERS/Veronica G. Cardenas

“Our focus on Tuesday is on our families who lost loved ones. We begin burying our children tomorrow, the innocent victims of last week’s murders at Robb Elementary School,” Uvalde Mayor Don McLaughlin said in a statement announcing the cancellation of a scheduled city council meeting on Tuesday.

At that meeting, Pete Arredondo, chief of the Uvalde Consolidated Independent School District police department, who has come under criticism for his response to the shooting, was scheduled to be sworn in as a recently elected member of the city council.

Arredondo was the on-scene commander who decided against storming the classroom where the shooter opened fire, erroneously believing he had time to mount an assault, according to state public safety officials.

Local police waited outside the classroom for nearly an hour as children called 911 pleading for help before a U.S. Border Patrol tactical team burst in and killed the shooter.

As the town grieves, the country again grapples with whether to reform U.S. and state gun laws, which in Texas allowed the shooter to legally buy an AR-15-style weapon on his 18th birthday, a week before the massacre.

The shooter bought hundreds of rounds of ammunition and a second rifle in the subsequent days.

Many Democrats including U.S. President Joe Biden have called for more restrictions. Republicans have successfully held off gun control measures, and in many states expanded gun rights in recent years, saying gun control only deprives law-abiding citizens of their rights.

Biden has backed such actions as a renewed assault weapons ban and universal background checks.