Thousands in US march in support of abortion rights

Thousands in US march in support of abortion rights

Thousands of abortion rights supporters rallied across the United States on Saturday, angered by the prospect that the Supreme Court may soon overturn the landmark Roe v. Wade decision that legalized abortion nationwide a half-century ago.

The protests kicked off what organizers predict will be a “summer of rage” ignited by the May 2 disclosure of a draft opinion showing the court’s conservative majority ready to reverse the 1973 ruling that established a woman’s constitutional right to terminate her pregnancy.

The court’s final ruling, which could return the power to ban abortion to state legislatures, is expected in June. About half of the 50 states are poised to ban or severely restrict abortion almost immediately should Roe be struck down. 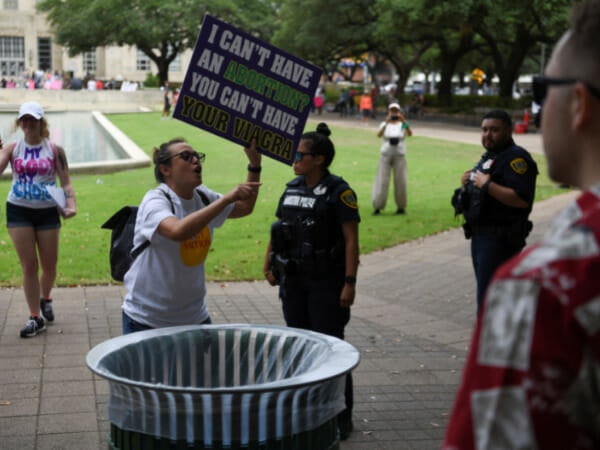 “If you can’t choose whether you want to have a baby, if that’s not a fundamental right, then I don’t know what is,” said Brita Van Rossum, 62, a landscape designer who traveled from suburban Philadelphia to join the abortion-rights rally in the nation’s capital, her first-ever.

Protesters marching under the slogan “Bans Off Our Bodies” took to the streets from New York and Atlanta to Chicago and Los Angeles in a show of outrage that Democrats hope will help galvanize support for their party and blunt projected Republican gains in the November elections.

The day’s largest demonstration unfolded in Washington, where a crowd that organizers estimated at 20,000 people massed at the Washington Monument and braved a light drizzle to march along the National Mall past the U.S. Capitol to the Supreme Court itself. 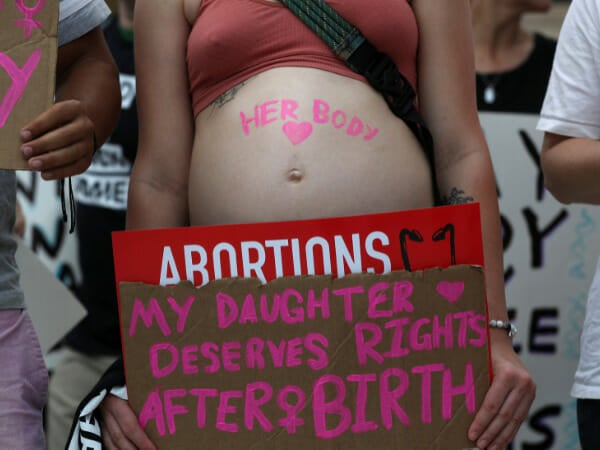 Abortion rights protester Emilia Knighton holds a sign in front of her body as she participates in nationwide demonstrations following the leaked Supreme Court opinion suggesting the possibility of overturning the Roe v. Wade abortion-rights decision, in Atlanta, Georgia, U.S., May 14, 2022. REUTERS/Alyssa Pointer

The rally erupted in shouts of “Shame” and “Bans off our bodies” as the marchers neared the marbled columns of the courthouse.

Surrounded by police was a group of a few dozen counter-demonstrators holding signs that read: “End abortion violence” and “Women’s rights begin in the womb.”

The encounter between the two sides grew tense at times. Abortion rights protesters shouted, “Go home!,” and one man whacked a counter-demonstrator in the head with his poster after profanities were exchanged. As the-anti abortion protesters left, they waved at the crowd, and a few called out, “Bye, Roe v. Wade!”

The rally appeared to remain otherwise peaceful, though at least one counter-protester was seen being escorted away by a security guard in Washington earlier in the day.

The mood was likewise energetic, and sometimes contentious, in New York City as thousands of abortion rights supporters crossed the Brooklyn Bridge into Manhattan, where they were confronted by a half dozen anti-abortion activists. 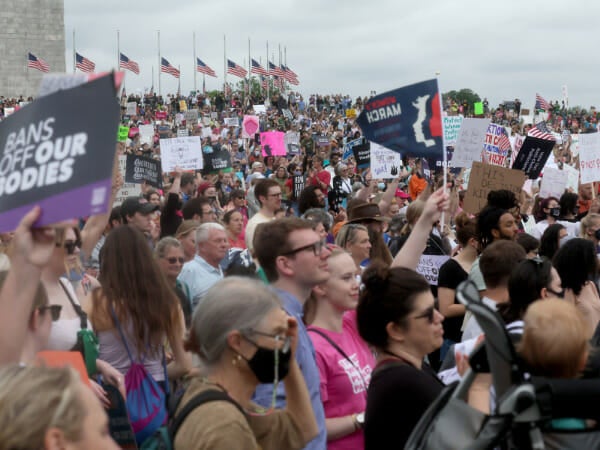 Police officers arrived to maintain space between the two groups as they traded taunts and vulgarities. The crowd thinned out in the early afternoon as rain fell over the city.

Elizabeth Holtzman, an 80-year-old former congresswoman who represented New York from 1973 to 1981, said that the leaked Supreme Court draft opinion “treats women as objects, as less than full human beings.”

Celebrity women’s rights attorney Gloria Allred told the crowd about her own “back-alley abortion” as a young woman when she became pregnant from rape at gunpoint before Roe. “I almost died,” she recounted. “I was left in a bathtub in a pool of my own blood, hemorrhaging.” 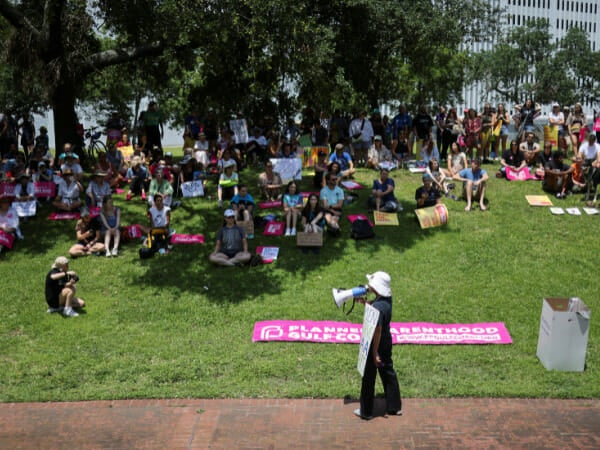 U.S. Representative Sean Casten and his 15-year-old daughter, Audrey, were among several thousand abortion rights supporters who gathered at a park in Chicago.

Casten, whose district includes Chicago’s western suburbs, told Reuters it was “horrible” that the Supreme Court’s conservative majority would consider taking away the right to an abortion and “condemn women to this lesser status.”

At an abortion rights protest in Atlanta, more than 400 people had assembled in a small park in front of the state capitol, while about a dozen counter-protesters stood on a nearby sidewalk.

“Jesus had just a small group, but his message was more powerful,” Marshall said.

While the Supreme Court leak thrust abortion back to the forefront of U.S. politics, it was unclear how the issue will play out in the coming elections.

Voters will be weighing a host of priorities such as inflation and may be skeptical of Democrats’ ability to protect abortion access after legislation that would enshrine abortion rights in federal law failed.

Many of those marching on Saturday expressed fear that rolling back abortion rights would lead to an erosion of civil liberties generally.

“This is just an affront to everything I believe that we’re supposed to be about,” Los Angeles musician Joel Altshuler, 73, said. “If a woman has no control over what is going to happen to her own body, then we’re back in 1850 not 1950.

MOST READ
usa WWII surrender of Corregidor, the rock wasn’t that solid
usa Is it game-over for TikTok? US FCC commissioner wants Apple and Google to remove the app
usa A first look at Chris Brown’s new album, ‘Breezy’
usa The Apple AR/VR Headset Is Coming! Here Is What We Know So Far
usa Two gunmen dead, six officers wounded in shootout at Canadian bank
usa Two Filipinos in Hawaii nabbed for allegedly stealing $260 worth of fruits
usa Fil-Am lawyer wins ‘Miss Texas’ crown
DID YOU KNOW?
Top 12 Resorts in Puerto Rico for 2022
5 Best Noise Cancelling Headphones of 2022
The Shakti Mat: Does It Really Work?
12 Best Travel Cameras to Capture Every Moment in 2022
Top 10 Best Fitness Trackers on Amazon
How to Shop for Engagement Rings Without Breaking the Bank