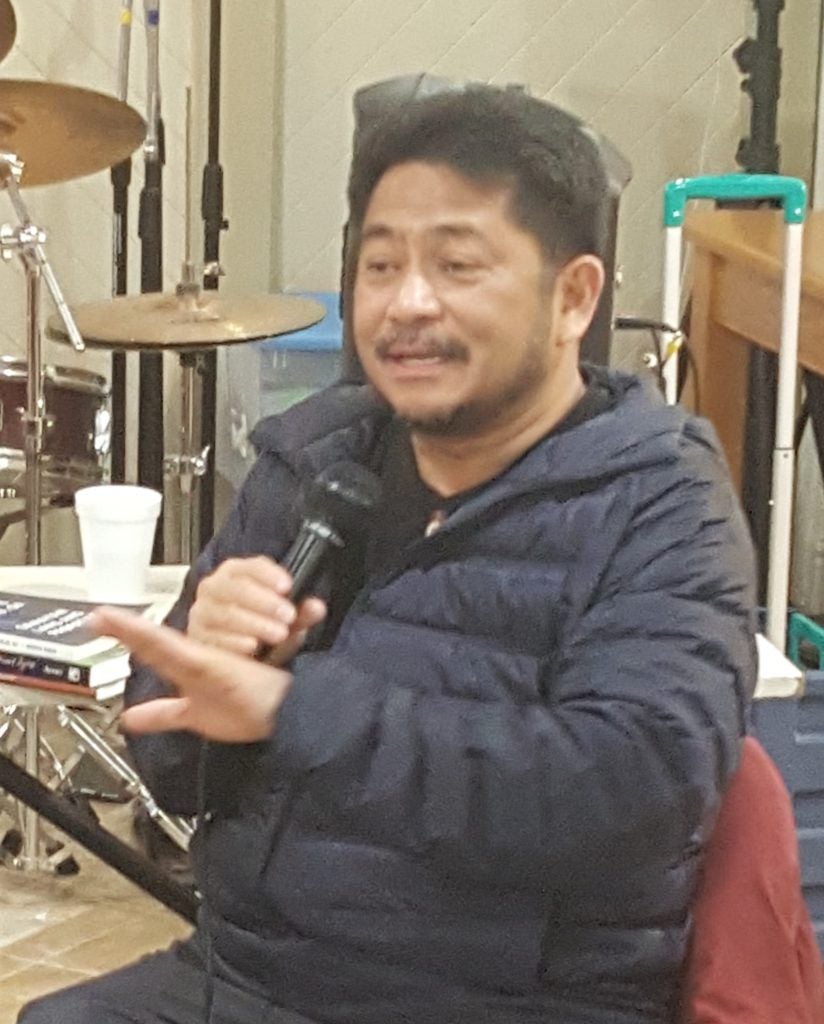 DALY CITY — A Jesuit priest who visited the Bay Area recently asked Filipino Americans not to forget the whistleblowers who confirmed the existence of the Davao liquidation squad that operated under then-mayor and now Philippine President Rodrigo Duterte.

Alejo made the appeal at the San Francisco Bay Area leg of his speaking tour dubbed “Social Media and the Drug War: Threats to Philippine Democracy?” held at the United Methodist Church in Daly City and attended by Filipino community leaders and human rights advocates.

Matobato had testified before the Senate judiciary committee in 2016 that Duterte created the DDS, when the latter was Davao City mayor, as a secret group tasked to kill petty criminals. Matobatao identified Lascañas as being part of the DDS, a claim that the latter initially denied under oath.

However, in a press conference months later at the Senate, Lascañas having had a change of heart, confirmed the existence of the DDS and that he was a part of it. He confessed to being one of the perpetrators the killings, receiving slush money to prepare them and receiving reward money for every kill.

Lascañas disclosed that he was given an allowance of P100,000/month on top of his salary for the special operations. He became remorseful because he had his own two brothers killed for using drugs.

He said that in blind obedience to Duterte whom he thought was very sincere in his war against drugs he also believed that the only solution to cleansing society was to crime suspects.

In one of the DDS operations, Lascañas was reportedly ordered to stop a van that, according to a PDEA intelligence report, was filled with drugs coming from China. But when he intercepted the van, Paolo Duterte allegedly called him up asking that the van be spared and that Paolo “would take care of it,” even directing where the van should go.

Alejo also recounted that Lascañas team members were puzzled that a shabu factory in, of all places, Davao City, even started operating in the midst of then-Mayor Duterte’s tough policy against drugs.

What baffled them more was that after raiding the factory and turning down a P10-million bribe supposedly offered by captured lab operator Allan Sy, then-Mayor Duterte allegedly ordered that the all the suspects be finished off. Lascañas and his men believed that they could have used the bribery offer to entrap the real masterminds. In the end, they surmised that Duterte did not really want to go deep in knowing who the real mastermind of the shabu laboratory was.

Paring Bert, as Alejo is more known, was first exposed in 1979 to life in Mindanao as part of his Jesuit vocation and served in Davao City in 1980 which, like much of Mindanao, was poor with so much violence in spite of Martial Law.

He went back to Davao as a seminarian, teaching high school from 1985-87 transition from Martial Law to People Power and was witness to so much violence between NPA and the military during Martial Law days.

Because of this, he said he could appreciate why Davao City and its people were probably longing for a leader that could deal with so many killings.

“In 1987, (President) Cory Aquino appointed under her revolutionary government Rodrigo Duterte as Davao City Vice Mayor, who after a year, won as mayor of the city. Within the first year, he created the Davao Death squad. For him the first thing to do was clean up Davao of all the nasty people, drug users, rapists, phone snatchers, among others. The theory or formula was he would take care of the peace and order and those who were into business, should take care of the economy,” Alejo recalled.

Alejo was again assigned to Davao City from 2000-2010, teaching in graduate school and working with indigenous people. He was responsible for putting up the research and publications office in Ateneo de Davao and taught in the Development Studies Program PhD and anthropology in Cagayan de Oro City Xavier University.

Alejo exhorted his audience to learn from the Davao experience because Duterte himself is saying that he is following the Davao formula.

“Davao City now can boast of having an efficient 911 system of communication, the taxi drivers giving change in full, a ban on smoking, that one can walk freely and safely at night without feeling being in danger, etc. We need to understand why the Davao people would support him. They were not really stupid but were coming from a very difficult situation. He won the presidency because he could show that Davao now is livable, competitive, among others. For them that’s it. And even for Kian delo Santos’ parents, justice for them is when you put to jail one or two policemen. Please understand the ordinary logic so we can also appreciate it,” Alejo said.

“But at the same time,” Alejo cautioned, “it is also good to consider that although Davao now has malls, it also has mass graves. And those victims officially are 1,424 in number not counting those thrown into the sea by the DDS.”

“The only justice they (Matobato and Lascañas) think they can probably offer is to tell the truth because they have killed so many people, and even losing their own lives would not be enough (to somehow compensate) for the many people they killed.”

What really disturbs him, Alejo said, is the support extended to Duterte by some church people, even nuns, “given all the lying, fake news, brutality both in action and in words.”

“How come many Christians including priests and nuns would lend support to extrajudicial killings? We really need to have a collective soul-searching. This is not just a political and economic struggle. It is also a moral and spiritual one. We, including the Catholic Church, need to double check. What have we done right, what have we done wrong? What else do we need to do?” Alejo advised.