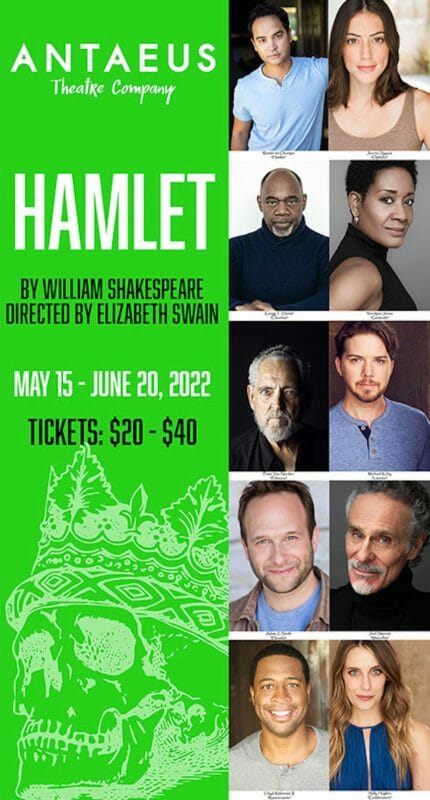 Following the death of his father, Hamlet, Prince of Denmark, returns home to find his uncle now occupies the throne and the queen’s bed. Spurred by the ghost of his father and surrounded by spies, Hamlet must choose between moral integrity and vengeance.

Like the company’s critically acclaimed production of the Bard’s Measure for Measure, which Swain co-directed just prior to the pandemic, this Hamlet has been streamlined for an all-Antaeus cast of ten.

In terms of setting and costumes, Swain’s production takes place in “an imaginary world.”

”So many of the belief systems expressed in the play—Heaven, Hell and, of course, ghosts—run counter to our modern beliefs,” she explains. “The realm of this production is mixed, with a flavor of the Renaissance and a touch of the contemporary. But what remains timeless about Hamlet is the corrupt nature of society. At its heart, this is a revenge play. And it’s a very good one.”

The Antaeus creative team includes scenic designer Stephen Gifford, costume designer Dianne K. Graebner, lighting designer Jared A. Sayeg, sound designer Cricket S. Myers, prop master Shen Heckel and violence designer Ned Mochel. The assistant director is Kaite Brandt, and the production stage manager is Taylor Anne Cullen. The production is sponsored, in part, by Rosemary A. Hernandez.
Antaeus is an actor-driven theater company that explores and produces timely and timeless works, grounded in its passion for the classics.
Performances of Hamlet begin on Friday, May 20, with performances continuing on Fridays at 8 p.m., Saturdays at 2 p.m. and 8 p.m., Sundays at 2 p.m. and Mondays at 8 p.m., through June 20 (no matinee on Saturday, May 21; dark Monday, May 23 and Monday, May 30).Four preview performances take place on Sunday, May 15 at 2 p.m.; and on Tuesday, May 17; Wednesday, May 18; and Thursday, May 19, each at 8 p.m.. Tickets to all performances are $40; tickets to previews are $20.
The Kiki & David Gindler Performing Arts Center is located at 110 East Broadway, Glendale, CA 91205 (between N. Brand Blvd. and Artsakh Ave.). The first 90 minutes of parking is free, then $2 per hour, in Glendale Marketplace garage located at 120 Artsakh Ave. (between Broadway and Harvard). The theater is air-conditioned and wheelchair accessible.