Love has no borders for these grandmas

Love has no borders for these grandmas 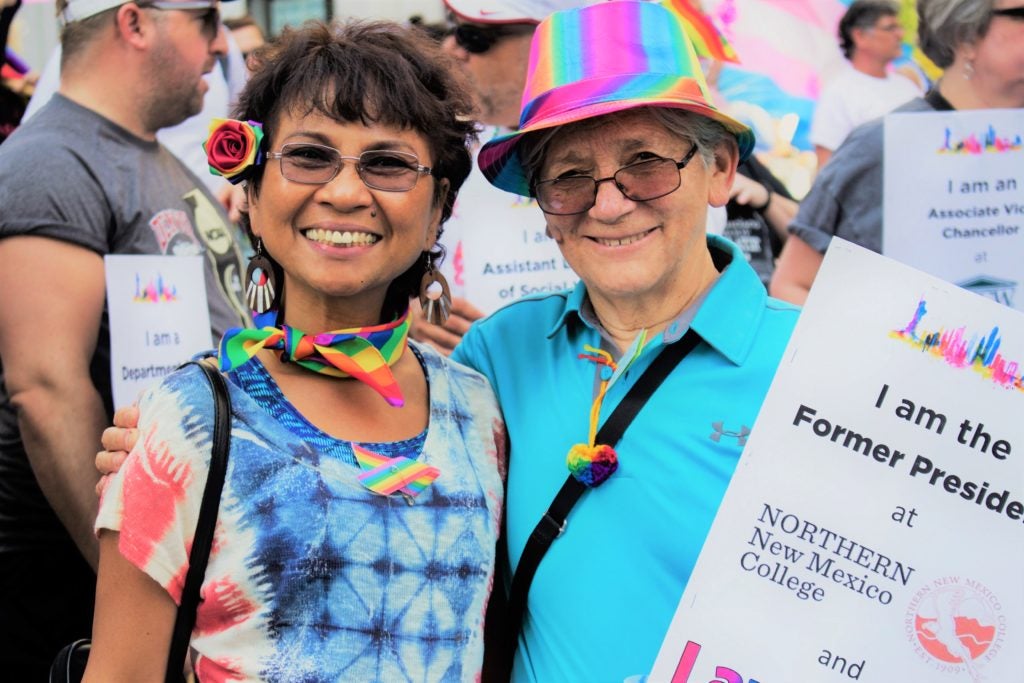 Mila and Rusty at the Happy Pride Parade in June 2016. CONTRIBUTED

Lola Mila will get married again!

“My five-year-old granddaughter, asked her mom innocently, “When I grow up, can I get married to a woman too?” Mila Anguluan, laughs. Mila is an expressive arts therapist to recovering drug addicts and alcoholics in a county program of New Mexico.

It was July 15, 2015 when Mila Anguluan and Nancy “Rusty” Barcelo, a passionate advocate for diversity and equality, and a former president of the Northern New Mexico College, exchanged commitment vows at the University of the Philippines, Diliman, blessed by a babaylan (priestess) Grace Odal-Devora. The two were married legally in Minneapolis, Minnesota, on October 22, 2016.

It took decades before Mila “liberated” herself from societal norms that had been inculcated to her as a Catholic woman, mother and wife.

Mila’s journey towards discovering her sexuality took three marriages. The first two relationships bore her six children; three from each marriage. The two younger children are now in the US while the four are in the Philippines. All are successful in their chosen careers. In America, she was married to a younger African-American man, a marriage that eventually ended in divorce.

In 1992, when her second husband died, Mila and her kids moved to Baguio to start anew. Raising six kids, the youngest was three, was difficult despite owning a business, aside from teaching at UP Baguio.  She decided to apply as a graduate student, an opportunity that also served as her key to enter the United States.

In 1999 Mila was accepted in the Drama Therapy Program at Kansas State University. She flew to the United States in 2000. 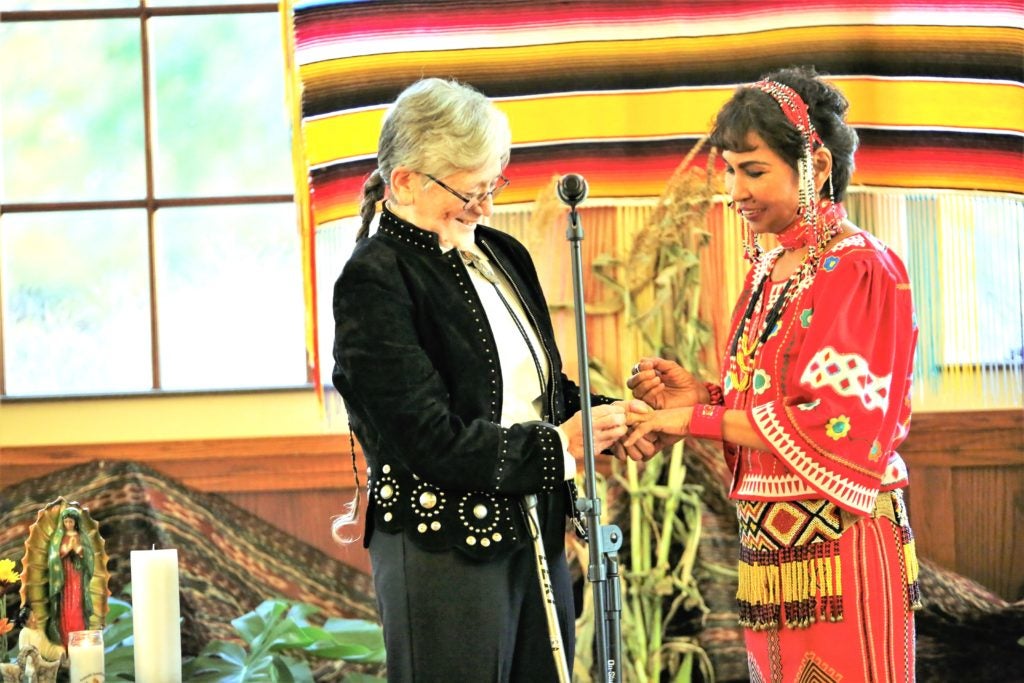 Mila and Rusty’s wedding in Minneapolis on October 22, 2016. CONTRIBUTED

While studying, Mila worked as a social worker in Los Angeles. After finishing her master’s degree, she was accepted at Lesley University in Cambridge for a PhD in Expressive Arts Therapies. She says that it was a “follow-up” to her passion for drama therapy in the Philippines. Mila had done drama in education workshops in the Philippines, to teach human rights to street children and those living in Smokey Mountain.

The arts heal. Mila has used expressive arts to help other people heal from a spectrum of physical and mental disabilities.

Expressive arts is “sining ng pagpapahayag.” Mila explains that the arts give us the ability and the capacity to express ourselves. She likens our deepest/unconscious longings to gangrenous wounds that need exposure to heal. Mila learned that the Filipino Americans are also have wounds that need healing.

She identified six Filipino elders who represented different indigenous backgrounds to meet Filipino American students. She held a series of workshops which became her dissertation.

First, she introduced myth-making. The elderly Filipino Americans told stories. Both generations did role-playing in “pamamanhikan,” chanting and storytelling. They retold the Legend of Bernardo Carpio in an identity crisis perspective. The two boulders pinning Bernardo Carpio were the East and the West. Bernardo represented the generations of Filipino Americans trying to settle themselves between two clashing cultures.

Next was mask-making. Mila narrated that we were all wearing different masks; the masks of oppression and liberation. Mila wore a mask. She was also in between two boulders.

After her PhD, Mila and her African American husband separated. She decided to teach in Hawaii. She settled in Honolulu and did volunteer work in a daycare facility where many participants were Ilocanos like her.

At one point Mila went to Minneapolis to attend a religious seminar. While waiting for her flight back to Honolulu, she met Rusty at the Minneapolis airport. They were both having a stop-over in Denver. It was October 2014.

The two women were separated by cubicles and busy with their own gadgets. But someone’s child played Cupid. “He came to our cubicles asking for his grandmother’s cane. We both looked for the cane. Instead, I found a guitar case with her,” Mila smiles.

She asked Rusty to play the guitar, but the latter said no. Naturally friendly, Mila kept on talking to Rusty, until they decided to transfer to the row of seats nearby.

Rusty was writing a memoir. She was a Catholic, born in California and has Mexican roots. “Rusty told me that her mother admonished her not to go out on Good Friday, yet she insisted and met an accident,” Mila recalls.

Touched by sharing a personal experience, Mila offered to sing to Rusty in Tagalog. She sang Ugoy ng Duyan. Rusty knew that it was a lullaby. Later, Mila learned that Rusty also composed songs and sang too.

During the flight, the two never stopped talking. They exchanged cards and went on their separate ways at the Denver Airport.

Mila admits that it never occurred to her that Rusty was a lesbian. She just wanted to connect with her. She sent her an email asking for the YouTube link to her compositions.

“She sent me a link. One liner only. Gradually, she opened up. I invited her to Hawaii,” Mila says. 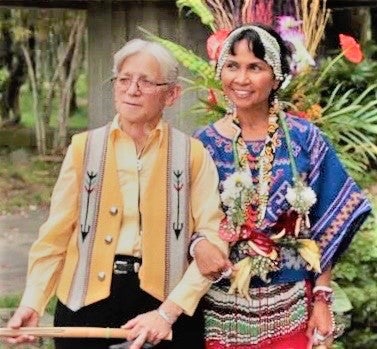 Rusty and Mila during their exchange of commitment vows in UP Diliman on July 15, 2015. CONTRIBUTED

Upon learning that Rusty was a lesbian, Mila sought the help of a group of women, Urban Babaylan where a few members were lesbians.

It was February when the two met in Hawaii. They spent three nights and four days together.

“It was a liberating experience for me. With her, I realized that being a woman meant uncovering facets of myself that I never knew before,” Mila beams.

Realization of a blessing

Years back, Mila had gone to Agusan Marsh in Mindanao. The datu performed a ritual to welcome her to the community. He summoned the spirits to bless the guests. After the prayer, the datu told Mila to place her offering to the Marsh.

“I asked the good spirits for someone to love; someone whom I could relate to on the deepest levels — in heart, mind, body and spirit” she shares. Rusty was the realization of the ritual.

Despite her age, Mila asked the blessings of her children and her siblings.

“My daughter approved of it. She told me to make beautiful memories where we can look back and smile together when we both grow old,” Mila says.

Mila shares that her friends and family members were shocked with the news of her relationship, but it was an opportunity to discuss with them a new concept of love and commitment. Even how to call Rusty became an issue. Lolo, Papa, Tito, or Kuya?

“We are both women loving each other. So, it’s Nanay, Lola, Tita or Ate,” Mila laughs.

Cultural differences do not hinder their relationship. Rusty has learned to woo Mila, and Mila does the same when there are misunderstandings.

Love is not just between heterosexuals, but it is what is within our hearts. “The truth in your heart will reveal who you are. You can find truth through love,” Mila ends