Craig Fuller monitors millions of transactions between U.S. truckers and their customers as chief executive of transportation data company FreightWaves – and he does not like what he is seeing.

There has been an unexpectedly sharp downturn in demand to truck everything from food to furniture since the beginning of March and rates in the overheated segment that deals in on-demand trucking jobs – known as the spot market – are skidding.

“It basically just dropped off a cliff,” said Fuller, who is concerned that the United States is at the start of a trucking recession that could decimate truckers’ ability to dictate prices and push some small trucking firms into bankruptcy.

Meanwhile, investors and financial analysts worry about what will happen if the trucking slump deepens and spreads.

History has proven trucking to be a possible indicator of the U.S. economy. That is because when people buy less, companies ship less – and business activity slows. Economic recessions followed six of the 12 trucking recessions since 1972, according to an analysis by trucking data company Convoy. 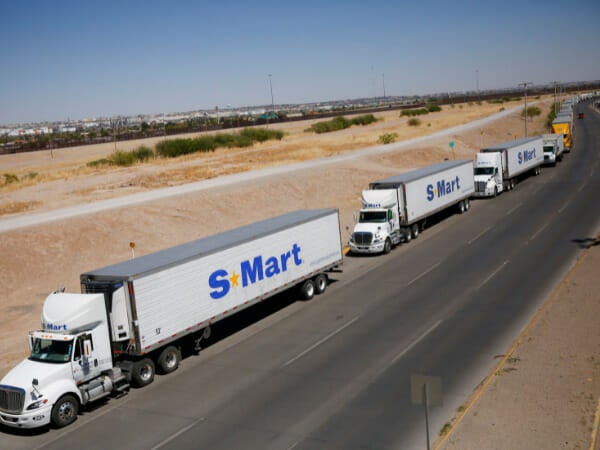 Trucks wait in a queue to cross into the United States near in the Cordova of the Americas International border bridge connecting the city of Ciudad Juarez to El Paso, Texas, in Ciudad Juarez, Mexico April 13, 2022. REUTERS/Jose Luis Gonzalez/File Photo

Experts predicted trucking would soften a bit as pandemic-weary consumers shifted some spending from goods to services in response to the United States lifting COVID prevention measures. But they did not foresee Russia’s invasion of Ukraine, which sent fuel prices to record highs, jolted already volatile stock markets, and forced shoppers to hit pause.

And now, trucking’s most demand-sensitive sector – the spot market – is in correction territory.

“It is the proverbial ‘canary in the mineshaft’,” said Joseph Rajkovacz, director of governmental affairs for the Western States Trucking Association. The group represents small trucking companies that dominate the spot market, which handled as much as 30% of freight during the height of the pandemic.

The spot rate deterioration hit when diesel prices were roughly doubling, battering the take-home pay of truckers like Marco Padilla, 63.

A few years ago, California-based Padilla spent 25-30 cents per mile to run his truck. “So for every dollar (of pay), I was pocketing 70 cents. Now it costs $1 a mile,” said Padilla.

While spot rates remained 37 cents per mile above what they were during the last bull market for trucking in April 2018, they fell 6 cents year-over-year earlier this month – marking the first such reversal of the current cycle.

“That’s where the fear is. Is that the floor? Does this keep going?” Croke said of the demand-led decline.

The share of freight handled by the U.S. spot trucking market roughly doubled after consumer spending on durable goods surged some 20% during the pandemic. In their rush to keep up, retailers and other shippers focused on speed over efficiency – using more trucks and exacerbating demand for them.

At one point, the truckload spot market was handling more than 1 million loads per day, versus its historical average of about 400,000, said Brent Hutto, chief relationship officer at TruckStop.com, which – like DAT – matches truckers with spot market loads.

But demand tumbled in March when retail sales excluding purchases of gasoline fell 0.3%. Online sales, which surged during the pandemic, declined for the second month in a row.

Big trucking firms like JB Hunt Transport Services and Knight-Swift Transportation Holdings are somewhat insulated by their one-year, fixed-price contracts with companies ranging from Walmart and Home Depot to Procter & Gamble. Walmart and many other companies have in-house trucking while also employing outside firms.

Meanwhile, some shippers are asking for shorter trucking contracts, “given their belief that rates may tick lower,” Cowen transportation analysts said in a recent note.

Indeed, some executives like Fraser Townley, CEO of video gaming controller seller T2M, are celebrating the declining trucking prices as a relief to their profit margins.

“They’re about one-third down. There’s still a long way to go,” Townley said.