Move on? Not a chance!

Move on? Not a chance! 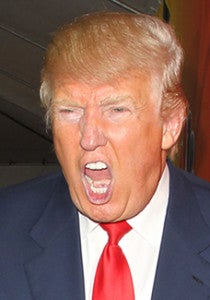 That is a refrain I keep hearing nowadays.

Move on. It’s over. Like it or not, the supremely unqualified Donald Trump will be the president of the United States in a few days.

I have a problem with that. One moves on when one has resolved something, a situation, a problem, to one’s satisfaction.

Or you move on when there is nothing else to be done. Any attempt to change the status quo is to piss into the wind.

But how does one move on when the man with the funny orange hair lost the popular vote by more than two-and-a-half-million votes to the supremely qualified Hillary Rodham Clinton, and cannot by any stretch of the imagination claim to have a mandate?

How does one move on when that man has admitted to preying on women?

How does one move on when we have a demagogue advocating policies that appeal to bigots—lovers of hate and haters of love—and promising to undo social safety programs that aid millions of citizens, with some of the hardest hit being members of the white working class that he claims to champion?

(On this last point, one wonders why anyone would vote for a man who will do serious harm to his or her interests.)

When he promises to repeal the Affordable Care Act (a/k/a Obamacare) with no idea of what to replace it with, when, as imperfect as it is, ACA has enabled millions of Americans to obtain health insurance?

When he has adopted white-supremacists’ hostile views of immigration, most pointedly of minorities, when immigrants—people from the four corners of the planet, of all races, colors, and creeds—have been one of the greatest strengths of this country?

How does one move on when that man defends an autocrat such as Vladimir Putin against his own country’s intelligence agencies, on credible charges of interfering with the country’s election campaign in order to benefit his own run?

How does one move on when this narcissist still refuses to release his tax returns, claiming that only the media is curious? And even if this specious charge were true, which emphatically is not, why would that excuse him from being transparent about his tax status? What is he afraid the public might find out?

How move on, when his Cabinet appointees will be foxes guarding the chicken coops, e.g., a denier of climate change as head of the Environmental Protection Agency, a would-be U.S. Attorney General with known racist views, a potential Secretary of State with a close relationship with Vladimir Putin and business ties to Russia?

When that carrot-topped gentleman has so many conflicts of interest people can be forgiven if they begin to think his allegiance is primarily to his businesses, his brand?

When he lies repeatedly and with all the glib assurance of someone used to equivocating?

When he mistakes Tweets for policy statements, railing against Vanity Fair, the cast of Hamilton, Saturday Night Live, and Meryl Streep?

When he mocked a reporter with a disability and encouraged violence at his rallies?

I once characterized George W. Bush as the worst president in modern U.S. history. No longer. That dubious distinction is about to be claimed very soon.

What a contrast with Barack Obama!

As president Obama was far from perfect, but on his watch the Great Recession was brought under control; Detroit’s car industry was not only saved but is now thriving; unemployment is at a historic low; gender and marriage equality policies now characterize federal rules; more public lands and waters have been set aside as protected areas and thus off limits to exploitation than ever before; and of course the Affordable Care Act was made into law.

Obama would have achieved more had the Republicans not consistently been the party of NO. They made it abundantly clear that their main goal was not for any bipartisan effort to govern well and for all citizens, but to make the Obama presidency as frustrating and difficult as possible.

I know what side the GOP (Greedy Oligarchic Politicians) would have been on during the French Revolution. Cake for them, crumbs for the masses. Their compliant king will make sure of that.