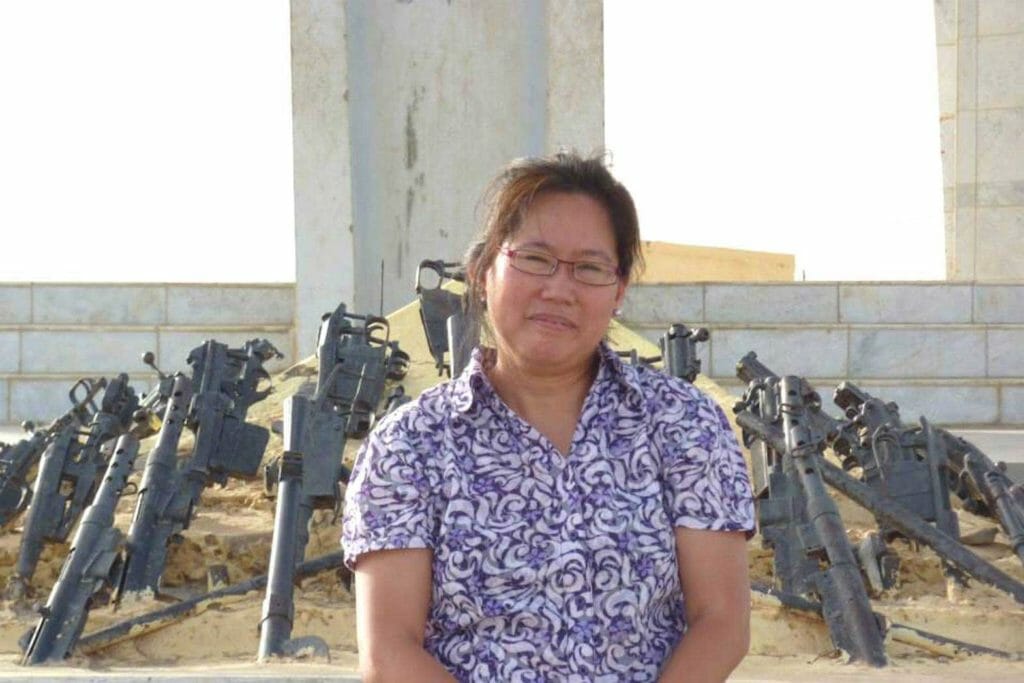 (9th in a series of profiles of Martial Law Babies as we prepare to mark the 50th anniversary of the martial law declaration in September. Ferdinand Marcos tried and failed to mold this generation into his version of the Hitler Youth. They fought his dictatorship instead.)

The story of cruelty brought back memories of home for Jade Pena. It reminded her of what it was like for us when we were growing up under the brutal dictatorship of Ferdinand Marcos.

She heard it in Indonesia where Jade, a medical doctor, was working in the early 2000s as an international humanitarian aid worker. A man in Aceh was hung upside down in a well, she was told, and used for target practice by the Indonesian military.

For some reason, that made her remember the report of another torture during the Marcos years when the military slammed a nail into a prisoner’s forehead.

“How could you do that?” was Jade’s reaction when she read it. She also remembered what happened to another doctor, Juan Escandor, whose brain was pulled out by the Marcos military and replaced with underwear and rags. “It was really a desecration of the body,” Jade said.

How our generation failed

Stories of torture and cruelty, of brazen violations of human rights — these  are at the core of Jade’s memories as a Martial Law Baby.

Our generation  learned to disdain the thugs who used these tactics to stay in power. The victory over the dictatorship was a victory over those who embraced cruelty and torture, who showed now respect for human rights. The triumph against tyranny was a triumph for the forces of human rights.

Yes, human rights violations remained a problem since the regime’s fall. But it’s been hard to understand how many Filipinos seem not to care about human rights,  highlighted by the popularity of a thug like Duterte, who inspired a wave of mass killings, and the rise of the son of the dictator who denies the plunder and abuse during his father’s reign of terror.

“We’re all asking each other: what happened?” Jade told me when we spoke via video call last week. “Where did we go wrong? Bakit nakalimutan lahat ang human rights, etc? Why have human rights been forgotten?”

It’s one of the failures of our generation, she said.

“After Marcos was deposed, it was kind of  like, ‘Ok our job is done. We can go back to our normal lives, whatever we can pursue. So you went to your writing. I went to med school. Some people went to development programs.”

Like most of us, Jade grew up in a world of fear and lies.

She was 7 when Marcos seized power in 1972. That day her mother, writer and activist Ninotchka Rosca, told her she was going into hiding and that she shouldn’t tell anyone where she was going. Her mother was later imprisoned. Jade remembers visiting her at Camp Crame behind a chicken wire fence.

Meanwhile, like most of us, she was forced to embrace the Marcos myth. She learned the new constitution, learned the fascist songs glorifying Marcos and Imelda. Her elementary school teacher warned her not to talk about her mother, the political prisoner.

“Stifled ka talaga. You were really stifled,” she said.

Jade and I became friends in the student movement in the fight against the regime in the 1980s. We won that fight. But there were many lessons from that struggle.

An important one is to never romanticize leaders and movements, those who claim to have history on their side, who have the correct political line — and who think they can embrace the same brutal tactics that tyrants use.

The view from other lands

Her work as a medical doctor and international humanitarian aid worker offered more lessons and reminders.

Jade worked in Burma where Aung San Suu Kyi emerged as an inspiring political figure leading the fight against a military junta only to become the head of state accused of endorsing the brutal massacres of Rohingya Muslims.

She worked in Libya and spoke with doctors who witnessed the brutality of the regime of Muammar Khadaffy. “May mga tinortyur. May mga kinulong. There were people who were tortured and imprisoned.” Again, it brought back memories of home. The stories, she said, were “typical Marcos time” atrocities.

Memories of the Marcos time are sometimes hard to process, especially now that Marcos Jr. is making a strong bid for power. 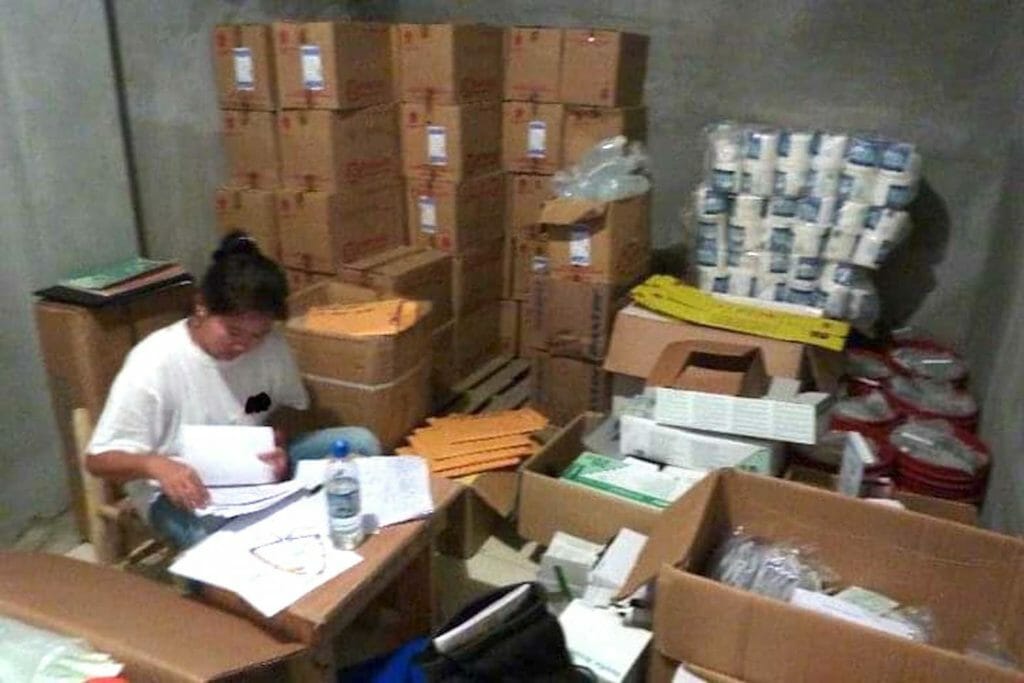 That led her to ask about what I’ve been doing, the series of profiles of Martial Law babies, about our generation. “Why are you doing this? Hindi ka ba na o-overwhelm sa mga sinusulat mo? Don’t you feel overwhelmed?”

That’s how she sometimes feels. That’s how Jade felt when she saw “The Kingmaker,” the documentary about the Marcoses. It was hard to watch, to see old footage of the Marcoses when they were in power, she said.

“Ang feeling ko talaga nasasakal ako. Hirap na hirap akong panoorin patigil tigil ako. It felt like I was being suffocated. It was really hard to watch. I had to stop many times. I just can’t watch the old footage again.”

“It is scary for me if they come back because it means buburahin ang history natin. They will make sure they will erase everything, iyong lahat ng documented na pagnanakaw. The stealing. The military abuses. The massacres.”

But her experience as a humanitarian aid worker and doctor in countries reeling from conflict also reminded Jade of another powerful lesson that the Martial Law Babies learned from the Marcos years.

Dictators and thugs eventually fall. It may take time, but eventually people fight back to take them down.

That’s what our generation saw happen. We were children when Marcos seized power which he used to plunder, kill and abuse our people. It seemed like he would always be in power — but then, when we were in our 20s, his regime collapsed, ousted by the people themselves.

That has happened in countries where Jade’s humanitarian aid work has taken her. That happened in Libya with Khadaffy. That happened in Indonesia with Suharto. “Kahit gaano katagal ang isang ruler sa isang bansa, mawawala din sila. No matter how long a ruler stays in power, they eventually disappear.”

Jade has become an active supporter of Leni Robredo, helping organize rallies in Paris where she is currently based. It’s an uphill battle as many have said. The Marcoses spent a huge chunk of the wealth they plundered during the dictator’s reign to spread lies and to try to distort history.

“We’re talking about 10 years of disinformation and of revisionism,” Jade said.

But Leni Robredo’s campaign offers hope, she said. The movement is growing. And it is highlighting the glaring differences between the defender of the dictator who nearly destroyed the country — and the vice president who has demonstrated what true, responsive leadership is all about, especially in a time of severe crisis.

“It was well thought out. People were desperate then. And she tried in her own little way to address the different aspects of the pandemic’s impact — from the frontline workers to those who lost their jobs.”

“She’s a solution-finder. Hindi puwedeng hindi puwede. She won’t accept that something cannot be done.”

Robredo, of course, is also a Martial Law Baby. “Hindi puwedeng hindi puwede”, in a way, became a slogan of our generation. And so was “tiwala sa tao.” Trust in people, especially the youth.

In a September 2012 essay on the 40th anniversary of martial law, Jade recalled one of Marcos’s lesser offenses when the dictator managed to enrage even children by banning Japanese cartoon shows Voltes TV and Mazinger Z. There were, of course, bigger lies and crimes that prompted our generation to fight back.

But “you don’t mess around with kids,” she wrote. “They eventually grow up and become activists.”