A federal judge on Wednesday issued the first acquittal in a criminal trial stemming from the Jan. 6, 2021, attack on the U.S. Capitol, saying prosecutors failed to prove their case against a New Mexico man facing misdemeanor charges.

In a case that could embolden some of the hundreds of other defendants facing minor misdemeanor charges to go to trial rather than seeking plea deals, U.S. District Judge Trevor McFadden accepted Matthew Martin’s argument that he did not know he was breaking the law when he entered the Capitol complex.

Martin, a former U.S. government contractor from Santa Fe, asserted that police officers allowed him into the Capitol building during the Jan. 6 assault on the building by supporters of former President Donald Trump who sought to prevent Congress from certifying Joe Biden’s 2020 presidential election victory.

Prosecutors were required to prove beyond a reasonable doubt that Martin knew he was entering a restricted area. McFadden, who was appointed as a judge by Trump, decided prosecutors had not met that burden. 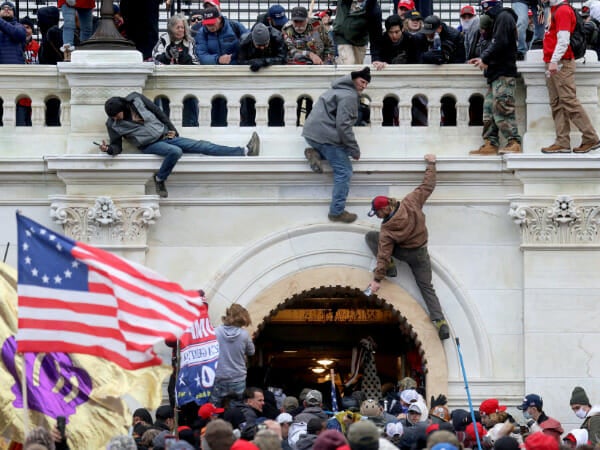 A mob of supporters of U.S. President Donald Trump fight with members of law enforcement at a door they broke open as they storm the U.S. Capitol Building in Washington, U.S., January 6, 2021. REUTERS/Leah Millis/File Photo

Martin’s lawyer Dan Cron said in an interview that Martin looks forward to moving on with his life.

Following the Capitol riot, Martin lost his top-secret level clearance and his job as a contractor supporting the U.S. Department of Energy’s nuclear stockpile in Los Alamos, New Mexico.

Martin had waived his right to a trial by jury, instead asking McFadden to determine his guilt or innocence in a proceeding known as a bench trial. This was the second such trial McFadden oversaw following one last month for another New Mexico man also facing Jan. 6 misdemeanor charges.

McFadden found that defendant, Couy Griffin, guilty of entering a restricted area protected by the Secret Service. But McFadden acquitted Griffin on a disorderly conduct charge, saying prosecutors failed to prove Griffin riled up the crowd.

Also last month, the U.S. Justice Department secured an important victory in the first Jan. 6 criminal case to culminate in a jury trial. Jurors found Guy Reffitt of Texas guilty of all five of the felony charges he faced, including bringing a gun onto the Capitol grounds and obstructing an official proceeding.

In another case, Enrique Tarrio, the former top leader of the right-wing group the Proud Boys, pleaded not guilty on Tuesday to criminal charges accusing him of conspiring ahead of the Capitol riot to block Congress from certifying Biden’s 2020 election victory.

(Reporting by Jan Wolfe; Editing by Will Dunham and Scott Malone)