Sen. Collins is the first Republican to support US Supreme Court pick Jackson

Collins, considered a moderate Republican, disclosed her intention to vote in the Senate to confirm the federal appellate judge in a statement released by her office.

The senator said she reviewed Jackson’s record, watched her testify during her Senate Judiciary Committee confirmation hearing last week and met her twice in person, and concluded the judge possesses the “experience, qualifications and integrity” to serve in the lifetime post.

Collins lamented what she called a disturbing trend of politicizing the judicial nomination process. 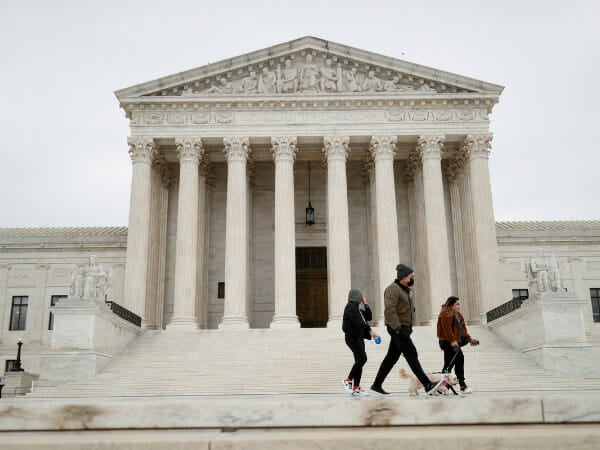 Visitors walk their dogs across the Supreme Court Plaza during a storm on Capitol Hill in Washington, U.S., February 22, 2022. REUTERS/Tom Brenner/File Photo

“No matter where you fall on the ideological spectrum, anyone who has watched several of the last Supreme Court confirmation hearings would reach the conclusion that the process is broken,” she said.

“In my view, the role the Constitution clearly assigns to the Senate is to examine the experience, qualifications, and integrity of the nominee. It is not to assess whether a nominee reflects the ideology of an individual Senator or would rule exactly as an individual Senator would want,” Collins added.

Senate Majority Leader Chuck Schumer, a Democrat, said last week the chamber was “on track” to confirm Jackson to the lifetime job before its expected break for Easter on April 8. Senator Joe Manchin, the most conservative Democrat in the Senate, announced last Friday that he would vote to confirm her, signaling that she will have the votes to overcome widespread Republican opposition.

With a simple majority needed for confirmation and the Senate divided 50-50 between the parties, Jackson will get the job if Democrats remain united regardless of how the Republicans vote.

Her confirmation would not alter the court’s ideological balance – it has a 6-3 conservative majority – but would let Biden freshen its liberal bloc with a 51-year-old jurist young enough to serve for decades. The Democratic president nominated Jackson last month to the lifetime post to succeed retiring liberal Justice Stephen Breyer.

During her confirmation hearing, several Republican senators accused Jackson of being lenient when she served as a trial court judge on sentencing child pornography offenders. Jackson defended her sentencing record, and American Bar Association witnesses rejected the allegations that she was “soft on crime.”

(Reporting by Will Dunham; editing by Jonathan Oatis)