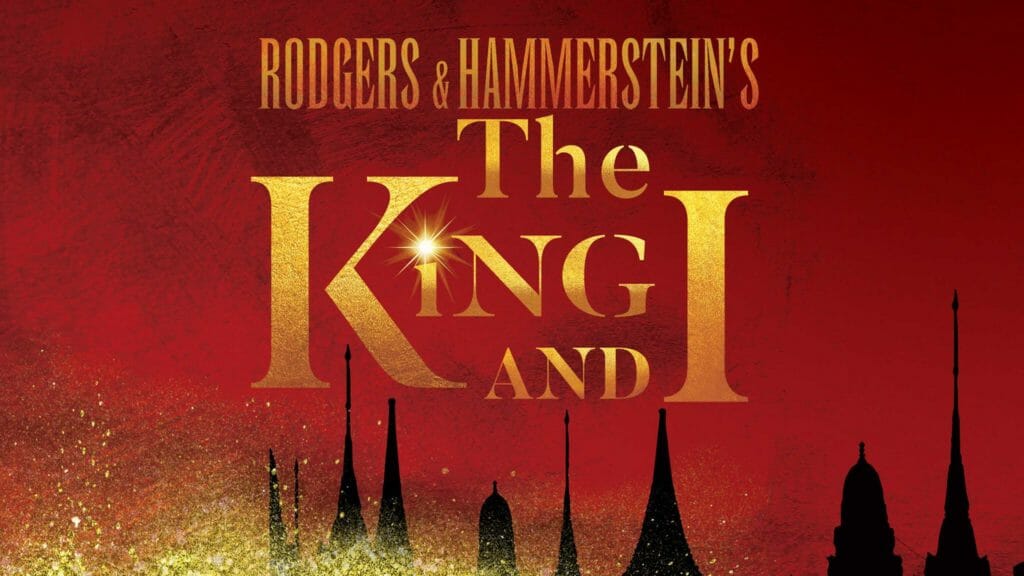 Filipino American stage actors will portray prominent characters in the Drury Lane Production of Roger and Hammerstein’s “The King and I” in Oak Brook, Illinois from April 1 –May 22. (Drury Lane Theatre)

CHICAGO – Filipino American stage actors will portray prominent characters in the Drury Lane Production of Roger and Hammerstein’s “The King and I” in Oak Brook, Illinois from April 1 –May 22.

Adam Jacobs plays King Mongkut of Siam (now Thailand) while Christine Bunuan will be the King’s wife, Lady Thiang, mother of the heir apparent that will be played by Matthew Uzarraga.

These three accomplished stage actors lead other Fil-Ams in the cast of the enduring Broadway musical about a British schoolteacher, Anna, who goes to Bangkok in 1862 to teach the children of the Royal household. She struggles with the proud King to adopt Western culture. 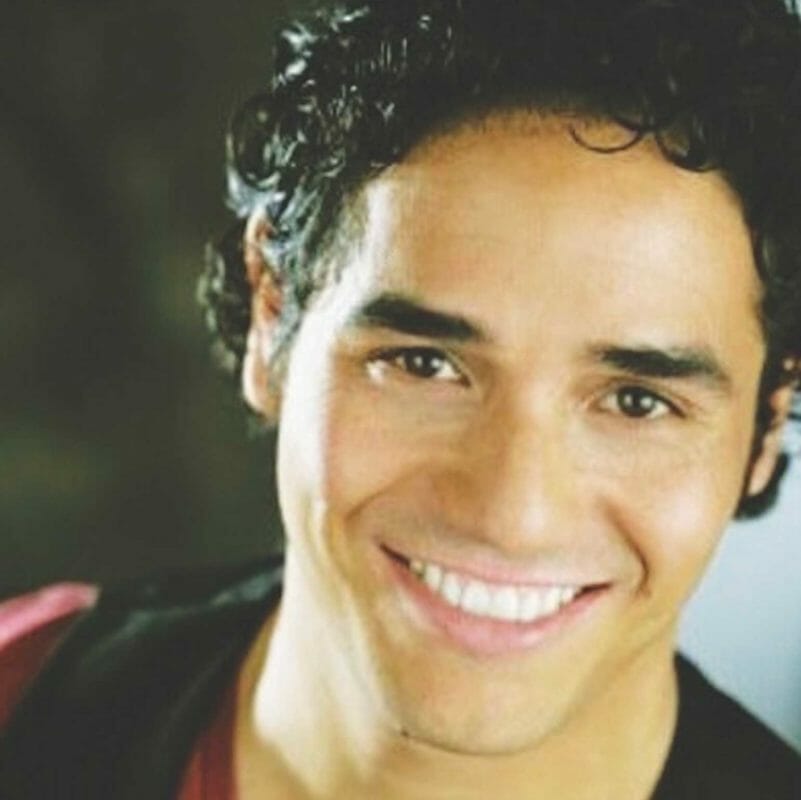 Adam Jacobs (left) rehearses his role as King of Siam in the Drury Lane Production of “The King and I.” (Drury Lane Theatre)

With beloved songs like “Shall We Dance?,”  “Hello Young Lovers” and “Getting to Know You,” the production won 13 Tony Awards, including Best Musical and Best Revival of a Musical.

Bunuan will get to sing a favorite, “Something Wonderful.”

As seasoned stage performers, Jacobs and Bunuan admitted that their current roles challenge them to find their own style of interpreting their characters.

“The King and I” deals with mostly daunting issues,” Jacobs said. Among the issues are cultural differences and sexism. “It’s a large conceptual idea told between a British tutor and the King among a whirlwind of action,” he added.

To prepare for his role, he visualizes and thinks about the most dramatic circumstances and how the character will respond.

“Actor Yul Brynner had such a commanding presence, but I don’t want to copy his style,” Jacobs said.  “I want to inject a sense of humor into my role,” he explained. (Brynner won an Oscar for his portrayal in 1956.)

Jacobs and Bunuan each have come a long way from the start of the pandemic, when COVID-19 stalled their stage careers in 2020.

“I couldn’t work because of the pandemic. I know a lot of people who left the stage business during that time. I was struggling to find ways to keep busy,” Jacobs said.

Instead, he and his wife transformed their own backyard into a local theater to teach children. “I also offered online master classes on acting and online classes on vocal performance,” Jacobs said.

Jacobs originated the title role of Aladdin in Broadway. He played Marius in the Broadway revival of “Les Misérables” (Lea Salonga played Fantine) and Simba in Disney’s “The Lion King.”

Growing up, he said he had lots of Asian friends he met through soccer, but he didn’t fully identify with his Filipino heritage on his maternal side. 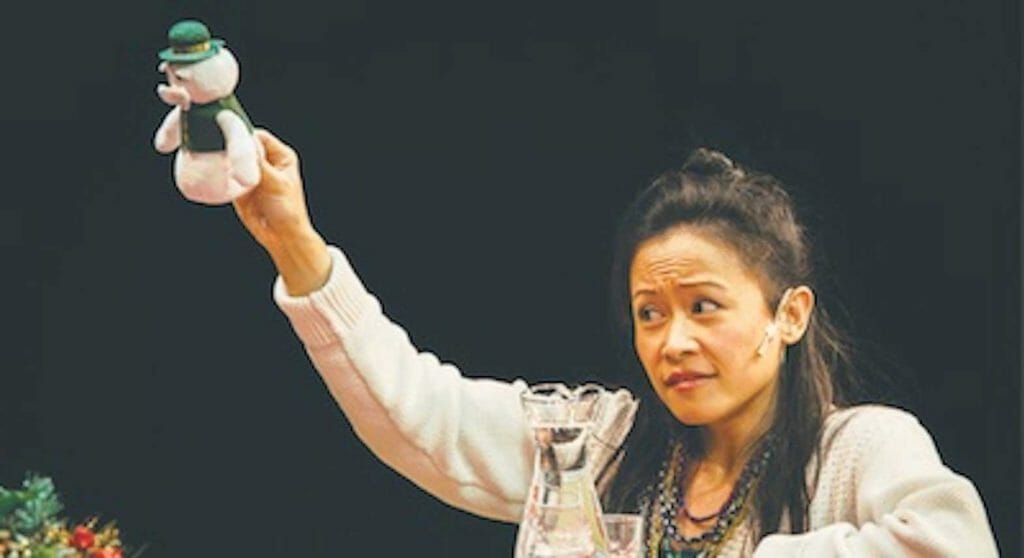 Christine Bunuan, an accomplished singer and actress, played bar maid Gigi during the Miss Saigon US Revival Tour in 2019-2020.

But he credits his mom’s sacrifices in his youth for his success. “My mom spent time and energy shuttling me to rehearsals and classes in the Bay area and supported me. She has attended every production I’ve ever played in.”

Jacobs’ mother, Abby Sorio, from Pangasinan, worked as an ICU nurse. His father, Alan Bruce, who is Russian, Jewish and Polish, passed away last year.

Jacobs has helped bring attention to the Stop AAPI Hate. To benefit the movement, he did a photo shoot for 2022 Calendar of Hot Men of Broadway.

Regarding the violence against Asian Americans, he responded, “I am very much saddened at the state of affairs. We have to speak up and make people aware. We have to bring attention to it.”

Christine Bunuan, an accomplished singer and actress, played bar maid Gigi during the Miss Saigon US Revival Tour in 2019-2020.

“It was a dream come true. I wanted to be in Miss Saigon since I was in high school,” she explained.

“I think we were the last touring company to close in the U.S. in March 15, 2020. It was heartbreaking. We didn’t get to say goodbye [to our casemates], we were so close knit.”

Out of work and forced to stay home during the quarantine, Bunuan turned to sewing. She made 500 masks for medical workers and nursing homes.

“The process in which I learn my part in this production is to go over the music, lyrics and motion of character, and putting it in your muscles,” Bunuan said.

“Lady Thiang has a strength in her stillness. She is commanding,” Bunuan observed.

Bunuan said that she is challenged by matching how “Lady Thiang’s belts out her voice” but said that the experience is also “enriching.”

Her parents are both natives of Tarlac. She said that her father came to the U.S. with only $800 in his pocket.

She has memories of her grandparents, who visited from the Philippines when she was younger. “We took care of my grandfather, who had throat cancer. He loved watching action films; he would sit up close to the TV. My grandmother cooked garlic fried rice. My siblings and I would dance and put on shows for them,” Bunuan recalled.

Bunuan in the future would like to work with Filipino actor-singer Rachel Ann Go. “I’ve heard her sing, seen videos of her. She has an incredible voice. I’m curious to see what she is like in person,” she explained.

Other Filipino Americans who are in the production include Uzarraga as the prince, and Richel Mari Ruiz and Alexandrya Salazar as part of the ensemble. “The King and I” is rated G.