Consecration to Mary: The Catholic world as one on March 25

Consecration to Mary: The Catholic world as one on March 25 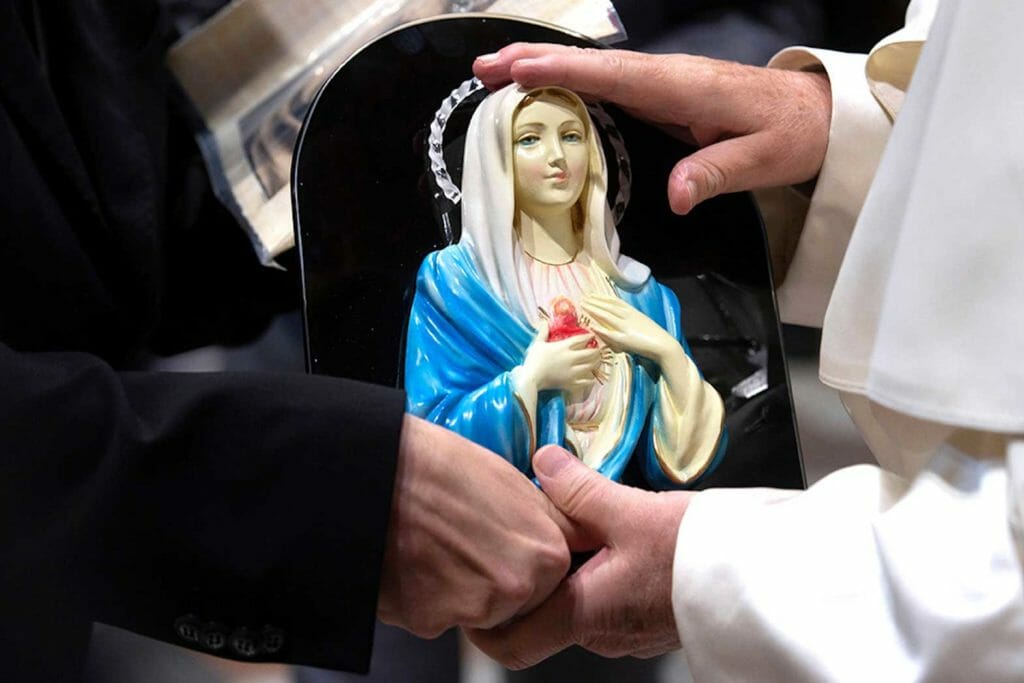 The forthcoming consecration is a communal supplication “to Jesus through Mary,” an ad-Jesum-per-Mariam global response to an immense human suffering.

Reading the signs of the times: After the Russian invasion of Ukraine on February 24, 2022, the world has continuously condemned the grave consequences of war, such as unnecessary deaths, destructions to property and important religious-historical relics and landmarks, serious injuries, migration of millions, sufferings of mind and body, divisions among peoples, brewing hatred in the human psyche, and a clear and present danger of a nuclear war.

Ukraine’s Latin Rite Catholic bishops. The bishops who lead Ukraine’s Roman Catholics sent a letter to Pope Francis on March 2 asking him to “publicly perform the act of consecration to the Immaculate Heart of Mary of Ukraine and Russia, as requested by the Blessed Virgin in Fatima.”

The consecrator. Pope Francis responded positively to the Ukrainian bishops’ request and announced publicly that he will do the consecration on March 25 (Friday) during a penitential service at St. Peter’s Basilica. We know that the Holy Father has lovingly dedicated his pontificate to Our Lady of Fatima and in October 2013, seven months into his papacy, has renewed the consecration of the world to Mary.

The occasion and its theological significance. March 25, 2022, is the 38th anniversary of St. Pope John Paul II’s consecration of the world to Mary. March 25 is the great feast of the Annunciation that commemorates the Incarnation of the Son of God, the Word made Flesh (John 1:14).

The forthcoming consecration is a communal supplication “to Jesus through Mary,” an ad-Jesum-per-Mariam global response to an immense human suffering. In a more profound theological explanation, it means that Pope Francis’ solemn consecration will lead us to a better understanding of Mary as Mediatrix of all graces and Jesus as the only Redeemer to save the world.

Sor Lucia Dos Santos, one of the three visionaries, said that the Blessed Virgin Mary told her: “If my requests are heeded, Russia will be converted, and there will be peace; if not, she will spread her errors throughout the world, causing wars and persecutions of the Church. The good will be martyred; the Holy Father will have much to suffer; various nations will be annihilated.”

“In the end, my Immaculate Heart will triumph. The Holy Father will consecrate Russia to me, and she shall be converted, and a period of peace will be granted to the world.”

In union with the bishops of the world. The Supreme Pontiff of the Universal Church has asked the world’s bishops to join him, at the same time when possible. This is an important detail to the millions of Fatima devotees who believe that Mary wanted the consecration to be carried out in spiritual union with the world’s episcopate.

Pope Francis added a special component to the March 25 consecration. Two days ago, Pope Francis wrote a letter pleading with all Catholics to assemble in their parishes on Friday to join him in this special event.

A week ago, the Episcopal Conference of Latin America (CELAM) announced that 22 bishops’ conferences representing hundreds of dioceses in South and Central America, and the Caribbean will participate.

The bishops of Argentina, the country of the present pontiff, join the public consecration with Bishop Oscar Ojea, the Conference president, as the main celebrant of the Holy Mass at Our Lady of Lujan – the Patroness of Argentina, Paraguay and Uruguay – where the consecration prayer is said.

Catholic bishops of England and Wales, Asia, Australian continent and the Pacific, and of North America likewise join Pope Francis in this consecration, while Archbishop Mark Coleridge, head of the Australian bishops’ conference, and Bishop Stephen Lowe of Auckland, the secretary of the New Zealand Conference, said earlier that they will participate in whatever way they can, given the still precarious situation of the pandemic in their countries.

Cardinal Wilton Gregory of Washington, who extended the invitation to the diplomatic corps and members of the federal government, will lead the Eucharistic Mass at the National Shrine of the Immaculate Conception, as nearly every diocese and Archdiocese across the United States and Canada, including the Catholic ordinariates of the military services, join the special event.

A few days ago, Msgr. Bernardo Pantin, CBCP Secretary General, said that all Filipino bishops will carry out the same act of consecration on March 25 in their respective dioceses. Cardinal Oswald Gracias, Archbishop of Mumbai, meanwhile, said that he will lead in the cathedral of the country’s capital the public consecration to Mary.

Cardinal Konrad Krajewski, the papal almoner, travels to the Basilica of Our Lady of Fatima in Portugal to carry out the public consecration, while Pope Emeritus Benedict XVI also joins Pope Francis and the bishops of the world. His personal secretary, Archbishop Georg Gänswein said that the retired pope does it privately from the Mater Ecclesia monastery where he has lived since leaving office.

The Consecration Prayer for March 25 mentions Ukraine and Russia a couple times.

We cannot expect that the March 25 consecration to Mary will stop the Russian invasion of Ukraine overnight. But we cannot also underestimate the miraculous power of the pope’s public consecration to Mary, in union with the bishops of the world and all the faithful, as we recall what occurred after St. Pope John Paul II consecrated the world to Mary in 1984. In 1989, the Soviet Union was dissolved and the Cold War ended, events seemingly impossible in 1984.

So what do we hope from March 25 consecration? I can only offer what St. Augustine of Hippo (354-430 AD) understood in De civitate Dei when he said that, until Christ returns “the Church will make her pilgrimage in the midst of the world’s persecutions and God’s consolations.”