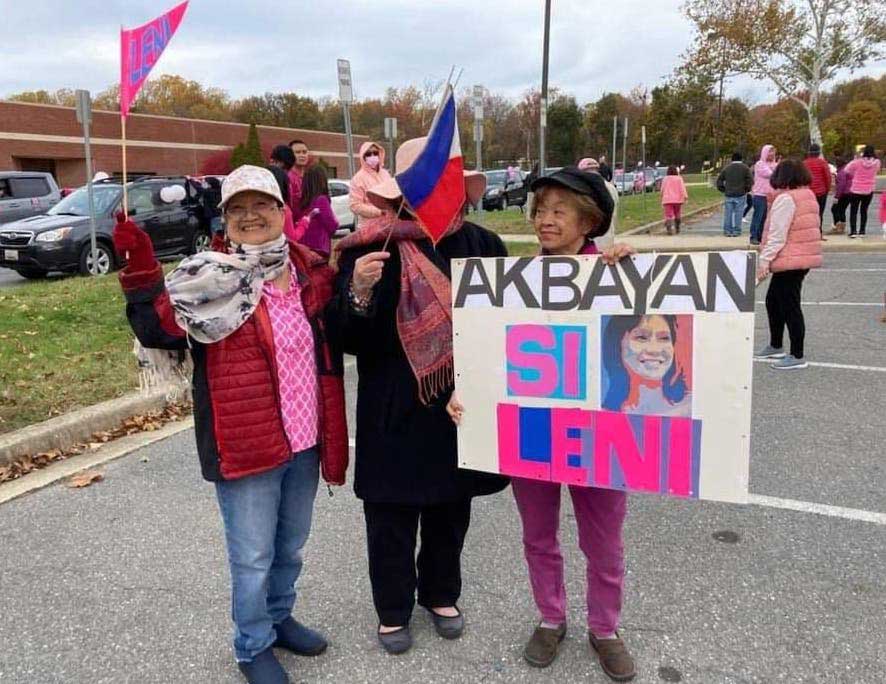 Scene before the start of a Washington, DC area caravan for Leni Robredo. FACEBOOK.

It’s only fitting that this year’s celebration of International Women’s Day culminated with Washington DC’s famed cherry blossoms coming out early – thanks to unseasonably warm weather since mid-February. Even before they had begun to flower, the blossom buds endured a cold spell and snow for two days in mid-March. At their flowering peak from late March to early April, these cherry blossoms transformed a barren place in the city to a vibrant landscape of white and pink.

Thousands of miles away in the Philippines, a similar phenomenon is happening in streets, parks and neighborhoods in barrios, towns, and cities across the country. At about the time cherry blossoms peaked in Washington DC’s Tidal Basin, Emerald Avenue in Pasig City lights up in a burst of pink, with more than 130,000 supporters roaring “Leni! Leni! Leni!” All over this island nation, pink ripples have swiftly turned into pink waves of resounding support for presidential and vice president aspirants Leni Robredo and Kiko Pangilinan.

Earlier this year, we had been disheartened when polls showed Robredo trailing Bongbong in the polls. The son of Dictator Ferdinand Marcos appeared to be the frontrunner. Is it conceivable that the Filipino people will allow themselves to be fooled again with another Marcos, we wondered with dismay? It will not only be hugely embarrassing to reward this corrupt family by returning them to Malacanang. It will be a devastating setback for the Filipino people who are still waiting for EDSA’s promise of democracy, following the People Power Revolution of 1986.

In our recent pink caravans and rallies in front of the Philippine Embassy and the White House, we reminded the American public of the worldwide rejection of the Marcos regime. “Never again,” we declared, should the Filipino people suffer under corrupt and repressive leaders.

Watching the videos posted and shared in the last few weeks, we are heartened to see the pink movement for Robredo getting bigger and bigger, undeterred by negative surveys and online black propaganda against her. In defiance, the “kakampinks” have turned her campaign into a people’s crusade for change. This show of force is electrifying to watch as supporters, in the words of Rappler’s Joel Pablo Salud, vow to “spill over backstreets, roads, bridges, rows of houses, parks, business centers, every damn well available space until there’s no air for them to scream ‘Marcos.’”

‘The magic already happened.’ One supporter who lost his wallet during one of the rallies attended by 137,000 people shared this account with a friend after someone called him to say the wallet was found:

The founder went beyond an extra mile to find me and was able to connect with common friends when they saw the name of the company I’m affiliated with, in one of the receipts that I was keeping. My wallet got lost in an event attended by 137,000 people and I got it back!

I am sharing this because this is not just about me and the story of my clumsiness. We attended a movement to call for an honest government. A government that does not steal. We convened in a place — 137k of us — because we believe that the candidate, we supported strengthens our aspiration for an honest government. We have not won the election yet. But the magic already happened. An aspiration for an honest government will bring honest people. There were one hundred and thirty seven thousand possibilities for my wallet to get lost forever. But it’s back. Dahil sa people’s rally ni Leni. WALANG MAGNANAKAW and HINDI KAMI BAYAD. I am a proud KAKAMPINK. Sa Gobyernong tapat, balik ang wallet ng lahat!

No presidential candidate in the history of the Philippines – possibly the world – has spurred people to volunteer to do good like Leni. Ordinarily, it’s the candidate who spends money to win votes. In Leni’s case, the people themselves fund and fuel the campaign. This is my first time to witness a lot of Filipinos selflessly using their own resources to help a candidate. Leni has inspired doctors to provide free clinics, lawyers free legal consults. There are food drives, feeding programs, concerts, caravans, and all sorts of creative community services to raise awareness and help her win.

Indeed, Incidents like this restore our hope, renew our faith in our kapwa tao, and brings us out of despair because Leni inspires us to summon the better angels of our nature.

It is propitious that at their flowering peak, cherry blossoms transformed a barren place in the city to a vibrant landscape of white and pink. Here in Washington, D.C. we feel the energy of the pink wave from a distance, connecting us to the masses, teeming with hope that they are the change they want to be, determined to transform a hard and unforgiving place where innocent blood spills from a cruel drug war to a kinder and gentler space spilling over with hope, joy, and love.