Ketanji Brown Jackson, President Joe Biden’s U.S. Supreme Court nominee, on Tuesday rejected Republican claims that she has been overly lenient toward some criminal defendants as a judge and pledged to “stay in my lane” if confirmed to the lifetime job as she faced questioning during her Senate confirmation hearing.

Jackson, in responding to Republican accusations that she has been soft on child pornography defendants, told the Senate Judiciary Committee: “As a mother and a judge who has had to deal with these cases, I was thinking that nothing could be further from the truth.”

Jackson, nominated to become the first Black woman to serve on the nation’s top judicial body, has served since last year as a federal appellate judge after eight years as a federal district court judge.

She told the committee she is an impartial and independent jurist. 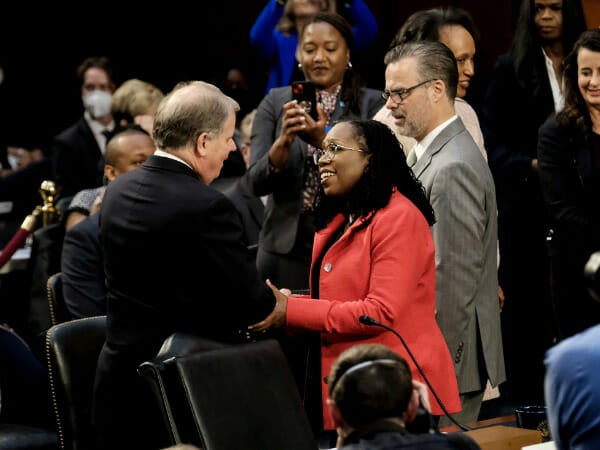 Judge Ketanji Brown Jackson is greeted by former Senator Doug Jones (D-AL) as her husband Patrick stands by prior to her U.S. Senate Judiciary Committee confirmation hearing on her nomination to the U.S. Supreme Court, on Capitol Hill in Washington, U.S., March 22, 2022. REUTERS/Michael A. McCoy

“Over the course of my career of almost a decade on the bench I have developed a methodology that I use in order to ensure I am ruling impartially and I am adhering to the limits of my judicial authority. I’m acutely aware that as a judge in our system I have limited power and I try to stay in my lane,” Jackson said.

“I’m not importing my personal views or preferences,” she added in explaining her approach to cases in response to questions posed by Democrat Dick Durbin, the committee’s chairman.

Jackson declined to weigh in on calls from some on the left to expand the number of seats on the court to wipe out its current 6-3 conservative majority. Justice Amy Coney Barrett, in her 2020 confirmation hearing, also declined to weigh in on the issue, saying: “It is a policy question for Congress, and I am particularly mindful of not speaking to policy issues because I am so committed to staying in my lane of the system.”

Republican Senator Josh Hawley has criticized Jackson’s record of handing down what he called “lenient” sentences as a federal trial judge in child pornography cases, below what the federal sentencing guidelines would recommend, a point echoed by fellow Republican Senator Marsha Blackburn. 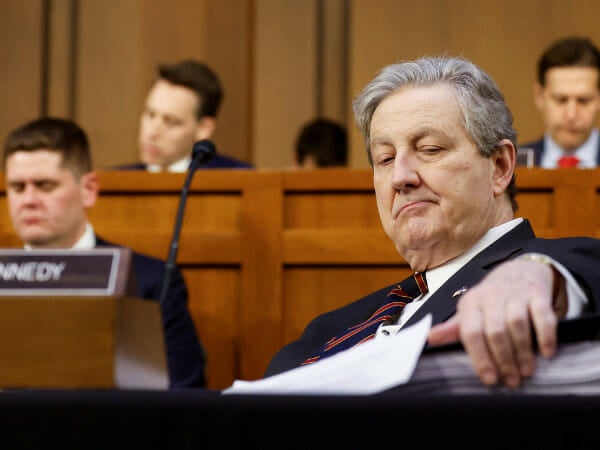 “I say to them there is only a market for this kind of material because there are ‘lookers,’ that they are contributing to child sex abuse,” Jackson said.

Federal judges routinely impose penalties under the guidelines – which are only advisory – in cases involving defendants who do not themselves produce child pornography, according to the U.S. Sentencing Commission, which has urged Congress to address inconsistencies in the guidelines that result penalties for some that are too lenient, and some too severe.

Jackson’s “sentencing practices for child pornography cases are squarely within the mainstream of federal district court judges nationally,” a group of sentencing experts said in a March 20 letter to the committee.

Some Republicans have sought to tie Jackson to activists on the left who say American history and institutions are infused with racism. When asked about race by the panel’s top Republican, Chuck Grassley, she pointed to the progress made since her parents were required by law to attend racially segregated schools as children.

“The fact we had come that far was, for me, a testament to the hope and promise of this country, the greatness of America,” Jackson said. 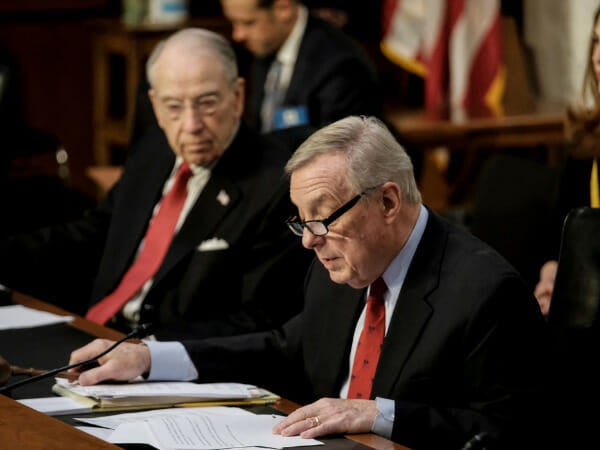 Jackson worked from 2005 to 2007 as a court-appointed lawyer paid by the government to represent criminal defendants who could not afford counsel. Among her clients was Khi Ali Gul, an Afghan detainee at the U.S. naval base at Guantanamo Bay, Cuba. The United States sent him back to Afghanistan in 2014 when she was no longer involved in the case.

Some Republicans have criticized Jackson for her representing the Guantanamo detainee. Jackson told the panel that the Sept. 11, 2001, attacks on the United States was tragic but that “we couldn’t let the terrorists win by changing who we were fundamentally.”

Jackson said she thought it “very beneficial” to have worked as a defense lawyer before becoming a judge in part because she learned how to talk to defendants and ensure they understand what is happening in court.

Biden as a candidate in 2020 pledged to appoint a Black woman to the court. He nominated Jackson, 51, last month for a lifetime job on America’s top judicial body to succeed retiring liberal Justice Stephen Breyer, setting up a confirmation battle in the closely divided Senate.

The committee’s 22 members will have the opportunity to question Jackson on Tuesday and Wednesday, with outside experts testifying on Thursday’s final day of the hearing.

If confirmed, Jackson would be the 116th justice to serve on the high court, the sixth woman and the third Black person. With Jackson on the bench, the court for the first time would have four women and two Black justices.

Biden’s fellow Democrats narrowly control the Senate, which has the authority under the U.S. Constitution to confirm a president’s judicial appointments. A simple majority vote is needed for confirmation, meaning Jackson would get the job if all Democrats are united regardless of what Republicans do in a Senate divided 50-50 between the two parties.

The Senate previously confirmed Jackson to three posts including last year, when Biden nominated her to the U.S. Court of Appeals for the District of Columbia Circuit. Jackson was raised in Miami and attended Harvard Law School, later serving as a Supreme Court clerk for Breyer and representing criminal defendants who could not afford a lawyer.

Her confirmation would not change the ideological balance of the Supreme Court, whose conservative majority includes three justices appointed by Biden’s Republican predecessor Donald Trump. But it would let Biden freshen the court’s liberal bloc with a justice young enough to serve for decades.