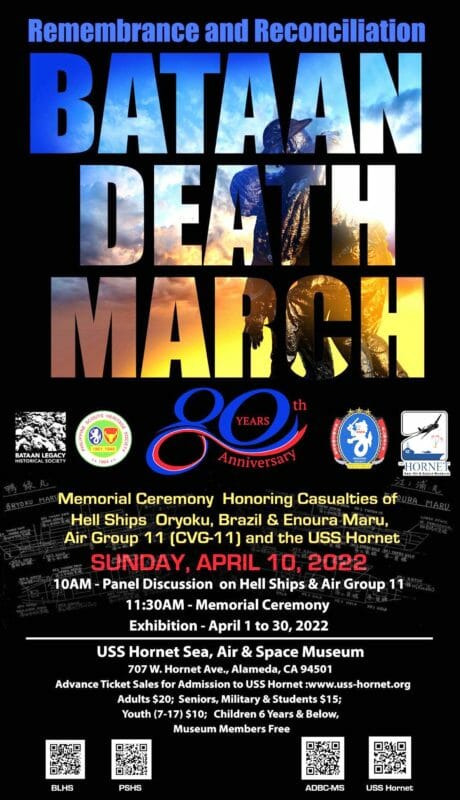 Memorial activities on Sunday, April 10 aboard the USS Hornet Sea, Air & Space Museum in Alameda, California, will honor Filipino and American soldiers and nurses  of  the U.S. Army Forces in the Far East (USAFFE) who were forced to surrender to the Imperial Japanese Army on the Bataan Peninsula 80 years ago.

Despite suffering from massive disease and starvation and fighting without any air support or reinforcement, they were able to disrupt the timetable of the Imperial Japanese Army by holding on to Bataan for 99 days until they surrendered on April 9, 1942.

To be remembered as well are the more than 126,000 Allied POWs who were transported in 134 ships during 156 voyages to different Japanese-occupied countries to perform slave labor.  Some 1,500 Allied POWs died due to the horrific conditions on board the hell ships. But more than 20,000 died from torpedoes and bombs from Allied planes and subs.

A panel discussion will open the day at 10 a.m. with descendants of those who perished from the Oryoku Maru and Enoura Maru as well as descendants of Air Group 11 (based at the USS Hornet CV-12), which bombed these hell ships without knowing about the identity of the passengers.  The memorial ceremony will start at 11:30 a.m..  The program will be posted at the Bataan Legacy website.

Tickets to the Hornet Sea, Air & Space Museum are available through www.uss-hornet.org.