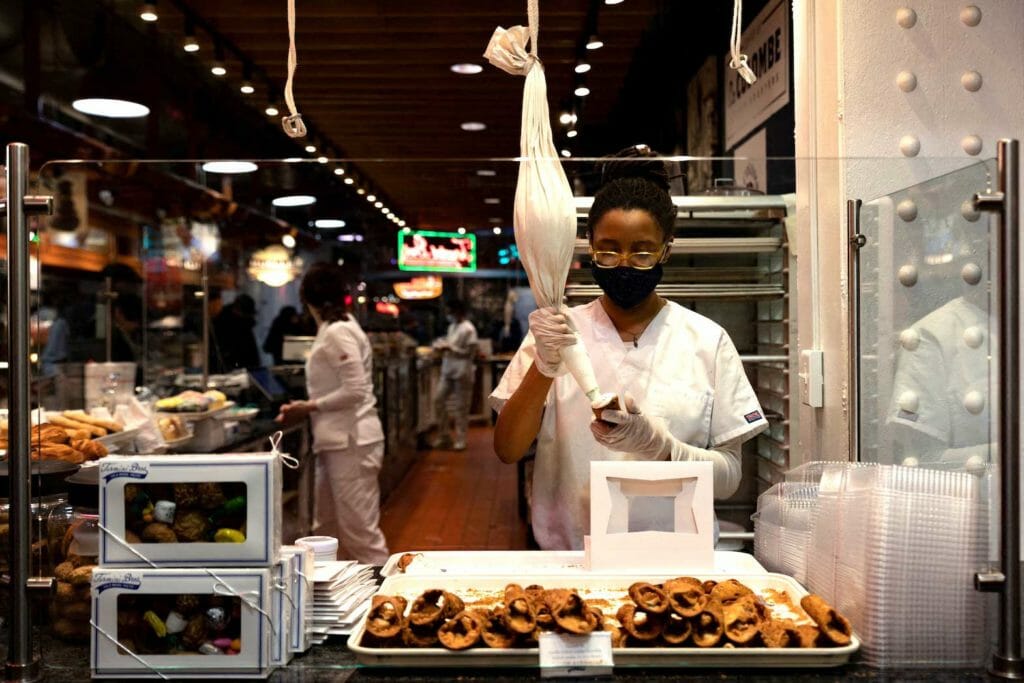 A worker fills a cannoli at a bakery at Reading Terminal Market after the inflation rate hit a 40-year high in January, in Philadelphia, Pennsylvania, U.S. February 19, 2022. REUTERS/Hannah Beier

The U.S. economy could get a $1 trillion boost over the next 10 years if female labor market participation grew to the levels seen in other developed economies, a report on gender equality said on Tuesday.

Published on International Women’s day by Moody’s, the report said women had been particularly hard hit by the COVID-19 pandemic as economic lockdowns disrupted schooling, child care and female-dominated industries like education and healthcare.

While that hit women globally, more left work in the United States and Canada than in the UK, Germany, Sweden and Australia, partly due to a lack of family-friendly policies such as guaranteed paid family leave and child-care subsidies, it said.

In the United States, the participation gap between prime-age women – women during their most productive years aged 25-54 – and men in the same age group stood at 11.4% in 2021 compared with a 6.6% gap in the UK and 4% in Sweden, the report added.

If new policies helped prime-age women join the labor market at the same rate as in other developed countries, Moody’s said real U.S. gross domestic product would grow 4% above its baseline forecast over the next decade.

The report comes as policymakers and investors, particularly in Europe, increasingly take a deeper look at the degree to which companies consider gender and other forms of diversity when hiring and promoting staff.

Moody’s, which provides credit ratings, said its data showed higher credit ratings not only correlated with greater board-level gender diversity, but also with a higher percentage of women in executive-level roles.

“We consider the presence of women on boards – and the diversity of opinion they bring – as being supportive of good corporate governance, which is positive for credit quality,” it said.

Amid the growing interest in diversity, Moody’s said it expected more debt issuers to link gender equity targets into their financing, helping issuance for green, social, sustainability and sustainability-linked (GSSS) bonds to hit a forecast $1.35 trillion globally in 2022.