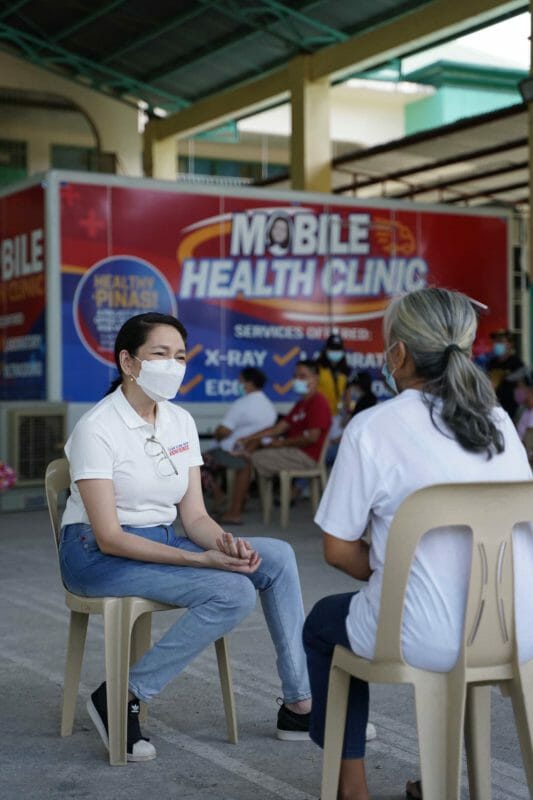 Sen. Risa Hontiveros has emerged as one of the most accomplished legislators in the post-dictatorship era. CONTRIBUTED

(7th in a series of profiles of Martial Law Babies as we prepare to mark the 50th anniversary of the martial law declaration in September. Ferdinand Marcos tried and failed to mold this generation into his version of the Hitler Youth. They fought his dictatorship instead.)

Only later did we understand what fascism meant. But that was the world we woke up to as children the day Ferdinand Marcos imposed martial law in September 1972 — a world where one man had all the power and abused it shamelessly to plunder, torture and kill.

Risa Hontiveros, now a senator running for reelection, had another unusual, but fun, early exposure to fascism during the Marcos years. She played Louisa, an adorable but mischievous teenager, one of Captain Von Trapp’s seven children in “The Sound of Music.”

The Repertory Philippines production also featured Lea Salonga, Monique Wilson and Menchu and Raymond Lauchengco, who went on to successful acting and singing careers. Risa also had hoped for a career in theater and music — and she certainly had a promising debut.

But then things changed.

“In the closing scene of ‘The Sound of Music,’ the Von Trapp family was really fleeing from the Nazi invasion of Austria,” she recalled. But the bullying, the terror, the repression that the Von Trapps fled from in a Europe dominated by Adolf Hitler — she realized it was part of her reality as a young Filipino. It was her world.

So instead of the theater, she ventured into a bigger, more important stage together with  other members of our generation, the Martial Law Babies, to embrace new struggles and songs — the sound of activism.

“Sobrang parang nag-dilang anghel. It’s almost like the angels spoke,” she said of her experience with “The Sound of Music.” “That theatrical, unforgettable experience, parang bisperas ng pagiging aktibista ko. It turned out to be the prelude to my transformation as an activist.”

That transformation led Risa Hontiveros to become one of the most important political leaders to emerge from the martial law generation. She is helping lead another critical battle: to defend the memory of the fight against dictatorship from being erased and distorted by a new wave of fascism led by Duterte and the Marcoses.

The young Risa Hontiveros (third from left in left photo) played Louisa, an adorable but mischievous teenager, one of Captain Von Trapp’s seven children in “The Sound of Music.” The Repertory Philippines production also featured Lea Salonga, Monique Wilson and Menchu and Raymond Lauchengco, who went on to successful acting and singing careers. CONTRIBUTED

It is, in a way, part of a global fight, as the world reels from the resurgence of authoritarianism, underscored by Vladimir Putin and Russia’s invasion of Ukraine.

There is much to be learned from what our generation endured and accomplished under Marcos, Risa says.

“We pierced through that veil of Marcos,” she told me on a video call last week. “He had his own propaganda project, daunting enough. Pero naging classic sa atin, it became a classic slogan for us: ‘MarcosI Hitler! Diktador! Tuta!’ It captured our imagination.”

“Ang pinaka naka-naooffend ako ay iyong babaluktutin, ipepervert iyong memory of the anti-dictatorship struggle. … I am truly offended by efforts to distort and pervert the memory of the anti-dictatorship struggle. It is the 50th anniversary of martial law. We know what we are up against, a decades-long historical revisionism project. It’s so exhausting to contemplate.”

Why she abandoned her first love

A theater career certainly would have been less stressful. And Risa hopes eventually for a chance to return to her first passion. “Talaga, Boying, pag wala na ako sa formal politics, babalik ako sa teatro and music. Mag-o-audition ako saPETA. Magbaba-backup singer ako kina Noel Cabanong. Once I leave politics, I will go back to theater and music. I’ll audition at PETA. I’ll be a backup singer. I’ll audition for nanay and lola roles. I don’t mind.”

After “The Sound of Music,” Risa had planned to audition for the role of Liat, the native girl who falls for Lt. Joe Cable in the musical “South Pacific.” Looking back, that would have been a truly odd role for Risa. For it’s hard to imagine a human rights and social justice warrior, and a staunch advocate for women’s rights playing the quiet, submissive girl, dancing with her fingers while Bloody Mary sang “Happy Talk?”

An encounter with a different group of “Marys” took Risa on a different path. The summer after her sophomore year at St. Scholastica’s High School in Manila, her mother took her to a forum on nuclear disarmament. “Doon ko unang nakita at narinig iyong Tres Marias. That’s when I first saw and heard the Tres Marias,” she said — referring to three leading women figures in the fight against the dictatorship: Nini Quezon Avancena; Sister Mary John Mananzan; and Mary Concepcion Bautista.

“I was so inspired by them. Inabandon ko iyong first love ko, theater and music. I abandoned my first love.”

The education of an activist

When she returned to school for her junior year, she didn’t join the glee club or do any more theater auditions. Instead, she launched a school organization opposed to nuclear weapons, the presence of U.S. military bases and the Marcos dictatorship. She grew close to teachers who were active in the fight against the regime. “They set me on this path of activism.”

Unlike the typical private school colegiala, her activism extended beyond Loyola Heights and the Makati confetti crowd. After her freshman year, Risa went on her first immersion: she lived with a fisherfolk family in Laguna, and came face to face with armed bullying for the first time.

Tatay Freddie Ignacio tried to eke out a living by fishing near and around fishponds owned by big politicians or officers of the military and the police. “Pag lumalapit iyong bangka ni Tatay Freddie, talagang tututukan kami ng baril. Every time our boat got close, they would point their guns at us. Unbelievable.”

Risa helped lead a campaign to aid farmers in Negros after the sugar industry collapsed around 1984. One of the grim images from that disaster remains fresh in her mind: the magazine cover photo of an emaciated child named Joel Abong, which sparked outrage over the way Marcos’ allies showed little regard for the suffering of the Negros farmers and even used violence to quell their protests.

She was a social democrat, but Risa worked with rival national democrats and even grew to admire some of their leaders. One of them was Lean Alejandro, the most prominent youth leader of the martial law generation who was assassinated in 1987.

“Sobrang inidolize ko si Lean Alejandro,” she said. “I really idolized Lean. He was not vanguardist toward us who were socdems. He was not sectarian. I super respected him.  Oh my god, when they killed, god damn. Hindi ko maigine naI’m old enough now to be his parent. I can’t imagine that I am today old enough to be his parent then.” Lean will always be remembered by the Martial Law Babies as the young leader who was killed when he was “at the prime of his youth.”

“He should have been one of our national leaders, not just in the mass movement, but also in government,” Risa said. Eventually, she stepped in to take on those leadership challenges.

After the fall of Marcos, Risa emerged as one of the most accomplished legislators in Congress. She has led the charge on critical issues, including human rights, health care and the fight against poverty.

She has also become outspoken in the fight for women’s rights — an issue that other political leaders, including some progressives, often stayed away from or considered unimportant.

Her leadership in the fight for the law on reproductive health was critical. And she has taken an important role in the effort to end the Philippines’ shameful status as one of the countries in the world where divorce is still illegal, taking on the shallow, backward and dangerous machismo and misogyny of the political establishment and the Catholic Church in a society where women often find themselves trapped in abusive marriages.

Risa’s Twitter retort to those opposed to divorce is classic: “Don’t want divorce? Then don’t get one! But let others have a second chance in life.”

The rise of Duterte, of a leader who inspired mass killings, who shamelessly jokes about rape and the abuse of women — that’s been hard to take, Risa acknowledged.

“He is messing with the minds of our young people who didn’t have the experience, who don’t have even a vicarious memory of the dictatorship, using the money they plundered from us and teamed up with the new money of the president and his cohort in that fake news, trolling machinery.”

Risa is part of Leni Robredo’s growing movement to defeat another Marcos, and to restore the freedoms and rights that have been severely eroded under Duterte. A key part of that struggle is to help people — especially young Filipinos — remember and understand what happened under Marcos.

It’s an uphill battle. But Risa says she stays strong by remembering the people who inspired her as a young woman living under the Marcos regime. “I always go back to my original inspirations for why I chose to become an activist.”

One of them actually taught her a practical lesson in the importance of persistence and strength in taking on uphill challenges. Lorenzo Tañada was already an elderly symbol of the fight against Marcos, and was known as “the grand old man” of the opposition, when he agreed to speak before Risa’s high school group at Saint Scho. It’s a story that she still recalls with fondness. 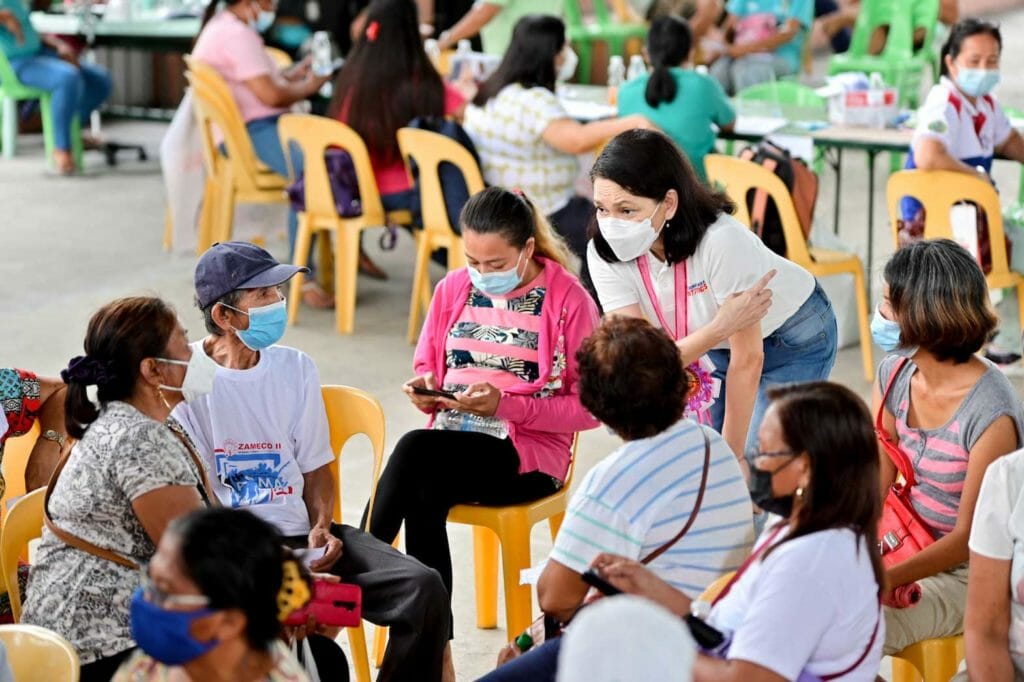 Sen. Hontiveros in one of her health consultations with constituents. CONTRIBUTED

Risa accompanied the late senator to the event venue which was on the fourth floor of the school. “Ka Tanny was already white-haired and bent over his cane. He walked up four floors all the while I was apologizing, ‘Sir, sorry pinaakyat ka namin sa fourth floor.’”

“Alam mo, I cannot forget what he told me. ‘Iha, as long as there are young people like you who want to talk about issues, I will climb stairs to talk to you.”

Now, it is Risa who is doing the climbing and the talking, working to make sure young Filipinos remember the fight, the struggle that Ka Tanny led with so much grace and courage  — so we don’t slide back “as if nothing happened, as if nobody fought and sacrificed, as if we didn’t expel the dictatorship in 1986.”

Duterte and the Marcoses are clearly threatened by that past, by the history of struggle and resistance, including the story of how young Filipinos, the Martial Law Babies, stood up against and defeated a bully and a thug. It is, Risa says, a dangerous story in the eyes of dictators and would-be-dictators.

“The prospect of another six years and stepping further back — nakakaiyak talaga. It really would make one cry. But we’re still fighting. … I always say lifelong activist ako. I’m a lifelong activist.”