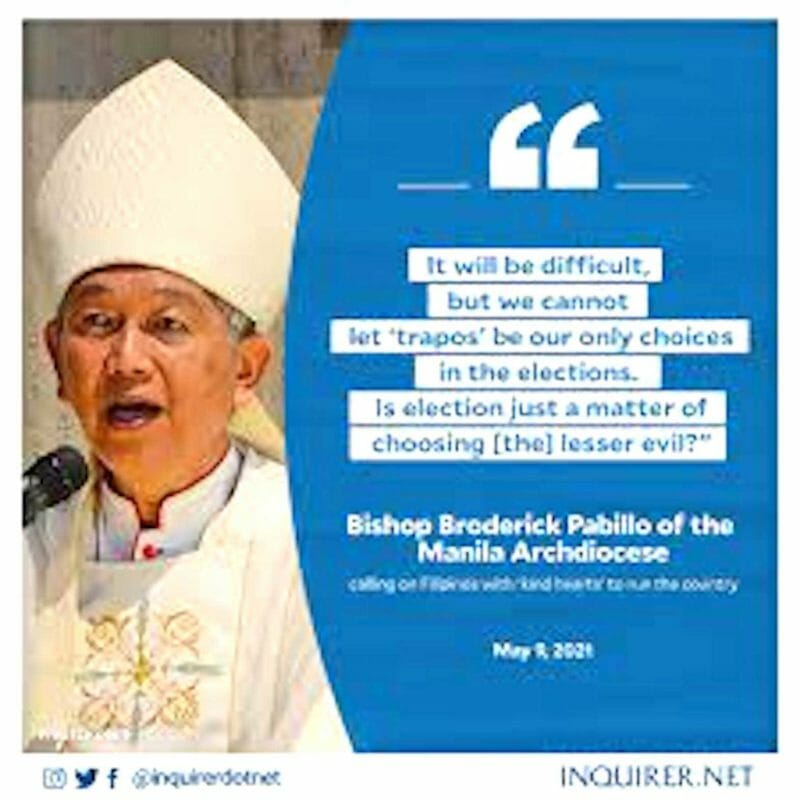 After a broad consultation with the ordinary citizens on the ground and a series of focus-group discussions with resource persons on the moral dimension of elections in the Philippine setting, and after an in-depth review of the Catholic social doctrine and Canon Law, which governs the Roman Catholic Church, we arrive at this seven-point pastoral guideline:

Canon Law is the law that governs the Catholic Church just as civil law governs the State.

Canon 285 §1 and 2 state that “clerics are to refrain completely from all those things which are unbecoming to their state” and avoid those “foreign to the clerical state.” Becoming members of New People’s Army and arming themselves with Avtomat Kalashnikova (AK-47) to pursue a violent armed struggle for social change like what Fr. Conrado Balweg, Fr. Nilo Valerio, and other clerics during and after Martial Law did is “foreign to the clerical state.”

Canons 285 §3 and 287 §2 directly forbid clerics “to assume public offices” and “to have an active part in political parties…” The basic assumption is simple: The Holy Priesthood is a sacramental office, not a political one and, like oil and water, partisan politics and ministerial priesthood cannot mix. After the 1986 EDSA Revolution, certain Catholic priests aimed for local elective positions like what Among Ed Panlilio did when he ran for Governor of Pampanga in 2007. In our time, when Fr. Granwell Pitapit and Fr. Emmanuel Alparce of Bicol, and Fr. Emerson Luego of Tagum decided to run for local elective posts, their respective bishops suspended them.

Are priests misusing the pulpit for politics?

As the 2022 elections in the Philippines draw near, the main focus of attention is directed to the pulpit, which is a sacred forum of evangelization. The pulpit is the principal instrument of the prophetic mission of the bishops and the priests, hence sacred.

Our GUIDELINE no. 2 above, that is, clerics cannot use the pulpit to endorse any candidate is based on the verbal reminder made by former CBCP President and Cebu Archbishop Jose Palma when he addressed his clergy last month. The bishops in general have interpreted using the pulpit to discuss partisan politics and endorsing any particular candidate as having an “active part in political parties,” which Canon 287 §2 prohibits.

Nevertheless, “so far, we do not hear of priests misusing the pulpit for politics,” Ted Santiago, Secretary of the nationwide organization called Sangguniang Laiko ng Pilipinas or Laiko was quick to say. “Priests do refrain from endorsing a political candidate during the Mass,” he said.

“We are not using the pulpit to endorse candidates,” said Fr. Leonido Dolor, a priest of the Archdiocese of Lipa. “However, we are giving guidelines on how to choose the right candidates, without mentioning names,” he added.

Cleric’s moral duty to give guidance to form conscience

GUIDELINES nos. 3, 4, and 5 speak of the moral duties of clerics to provide guidance and principles for discernment to have a well-informed conscience.

In a homily, when a cleric lists the good qualities of a candidate based on Christian principles, that is not politicizing. He is doing his prophetic duty in evangelization. Bishops and priests are duty bound to do that because, in the first place, politics has a moral dimension.

Clerics (bishops, priests, deacons) can use the pulpit to read pastoral guidelines on election and deliver homilies related to the moral dimension of politics.

Can a cleric endorse a particular candidate?

He can do this when he speaks as a private citizen and not as representative of our Mother Church and when it becomes clear that such a candidate stands for or has become a symbol of the Christian core values and basic principles. Leni Robredo is running as an independent candidate rather than under the Liberal Party despite being its chairperson, a move she did to underline an open all-embracing type of politics that is based on good governance, grassroot empowerment, social justice, truth, and transparency.

When the Jesuits, the organization called “Pari Madre Misyonero Para Kay Leni,” and other diocesan and religious clerics openly endorse Robredo’s candidacy, they are publicly and vigorously campaigning not for any partisanship, but against the promotion of corruption, culture of death, distortion of truth, injustice, and impunity to do evil.