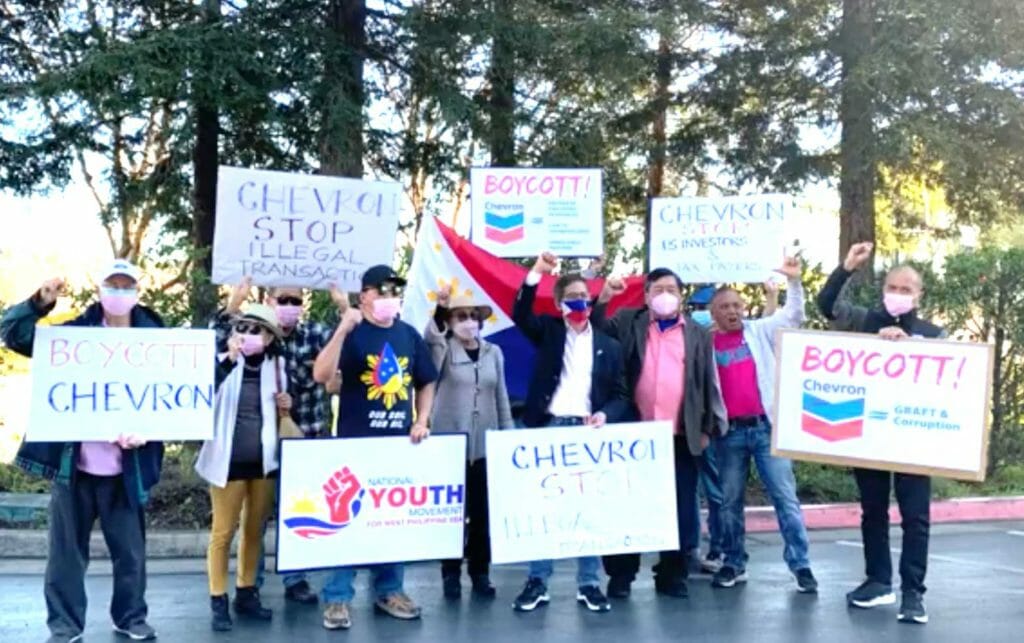 Fil-Ams protesting and calling for a boycott of Chevron products, at the corporation’s headquarters in San Ramon, California. SCREENSHOT

SAN FRANCISCO – Filipino American activists staged a protest at the headquarters of Chevron Corporation in San Ramon, California and called for a boycott of Chevron products for its alleged role in facilitating the controversial transfer of its service contract for the Philippines’ Malampaya gas field to a friend of President Rodrigo Duterte.

The protest and call for a boycott of Chevron support a complaint filed before the U.S. Securities and Exchange Commission (SEC) against Chevron for alleged violation of provisions against graft and corruption and sections of the US SEC Act.

“If four million Filipinos in the U.S. stop buying from Chevron, maybe they will start to listen and maybe they will try to talk to us on what is the best solution to the Malampaya question,” Nicolas-Lewis reasoned. “They should nullify the contract and return Malampaya to the Filipino people.”

Specifically, Chevron allegedly violated the Act’s Section 10(b)(5), when it transferred its interest in the Malampaya gas field to Udenna Corporation’s UC Malampaya subsidiary in March 2020.

The SEC complaint was filed by lawyers Loida Nicolas Lewis and Rodel Rodis of US Pinoys for Good Governance. They were joined by Arthur Medel, Rocio Nuyda, Celia Lamkin, Eric Lachica, Ago Pedalizo, and Art Garcia.

It also alleged that Cusi and others conspired to give unwarranted benefits and advantage to Uy’s Udenna Corporation and UC Malampaya, “causing undue injury leading to a minimum of over P21 to P42 billion in total losses to the Philippine Government.” Also, the transfer of contractual rights and obligations required prior approval of the Department of Energy, which the respondents allegedly ignored.

“The assets in Malampaya belong to the Filipino people, and we hope our leaders will do their best to protect it for future generations,” said Rodis, who also stressed that the CEO of Udenna Corporation, Dennis Uy, is “one of the major financiers tof Duterte’s national campaign in 2016.”

Nicolas-Lewis added that the $50 million that goes to Udenna would instead go to the Filipino people for building of more schools, hospitals, more children who cannot afford can be sent to college to become doctors, nurses, lawyers, accountants, teachers etc. Rodis earlier said that Uy is now earning around about a million dollars a day  as a result of the sale.

Last Feb. 4, Senate Committee on Energy Chairman Sherwin Gatchalian transmitted to the Ombudsman a Senate resolution calling for filing of criminal and administrative charges against Energy Secretary Alfonso Cusi and other officials for “railroading the approval of the sale of participating interest of Chevron in Malampaya gas field.”

“Key officials of the Department of Energy (DOE) led by Secretary Alfonso Cusi are criminally and administratively liable for graft, gross neglect of duty, and grave misconduct and should immediately resign from their posts,” Gatchalian claimed.