St. Thomas Aquinas and the Dominicans

St. Thomas Aquinas and the Dominicans 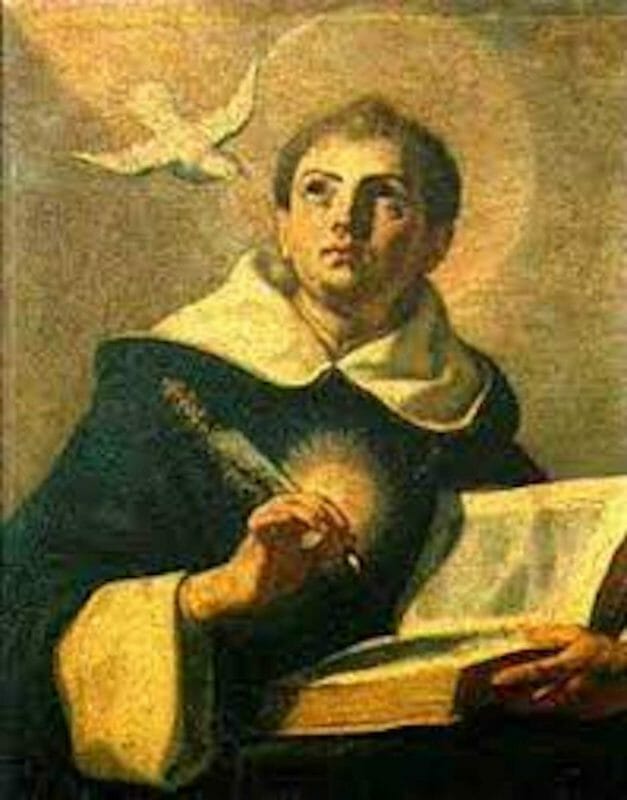 Those who remember singing or listening to Tantum Ergo, O Salutaris Hostia, Panis Angelicus, Adore Te Devote, or Pange Lingua may not know that they are 13th-century hymns composed by St. Thomas Aquinas in honor of the Real Presence of Jesus in the Holy Eucharist.

Like many saints, and very similar to Pope Francis in our time, St. Thomas Aquinas was ahead of his time. His theology was considered not only advanced but earth-shaking, and for this the Bishop of Paris condemned some of his works twice — in 1270 before his death and in 1277 after his death.

Eventually, after a long and tedious in-depth study and deliberations of his life and works based on evidence and orthodox Catholic teaching, 50 years after his death, Pope John XXII canonized Thomas a saint in 1323 and Pope Pius V proclaimed the Dominican priest a Doctor of the Church in 1567.

St. Thomas Aquinas is known as the Angelic Doctor, “angelic” because what St. Bernard of Clairvaux said that “chastity can make an angel of a man” was officially applied to him by our Mother Church, and “doctor,” meaning Doctor of the Universal Church, which is a formal title rarely bestowed by a Pope to saints recognized for making extraordinary contributions to Catholic theology and/or moral teachings, mainly through their original writings.

I deem it significant to bring up one detail that happened at his canonization process in 1323. Unable to dismantle his sound teaching, the assigned Devil’s Advocate had to devise other objections to prevent his becoming a saint. One objection, he proposed, was the absence of miracles, to which one cardinal clapped back: “There are as many miracles in his life as articles in his Summa Theologica.” The truth is, like San Francesco di Assisi and Sta. Teresa de Avila, St. Thomas was a mystic, whom sacristan Dominic of Caserta saw levitating in prayer with tears before an image of the crucified Christ and whom his confreres saw experiencing an ecstasy celebrating Mass in 1273.

St. Thomas Aquinas, born in 1225 and died in 1274, was the youngest of eight children, a rich boy born in a castle, owned by Landulf, his father, the Count of Aquino, and Theodora, Countess of Teano. At the age of five, he was placed under the care of the Benedictines of Monte Casino, the first Benedictine Abbey founded in 529 AD.

From Monte Casino, he moved on to the University of Naples where he met members of the newly-founded Dominican Order. While his brothers followed careers in the military, he, at the age of 19, decided to become a Dominican priest against the wishes of his parents.

The Dominicans arranged for Thomas to travel from his hometown to Rome and from Rome to Paris. But while on his journey to Rome, Thomas was kidnapped by his own family. Per his mother Theodora’s instructions, his brothers seized him as he was drinking from a spring and took him back to his parents at the castle of Monte San Giovanni.

If facts be narrated, young Thomas was held a prisoner for two years in the family castle in an attempt to prevent him from assuming the Dominican habit. But Thomas remained steadfast and held on to his dreams. At one point, two of his brothers resorted to hiring a scantily-dressed prostitute, a certain temptress of seductive beauty, to lure him. The prostitute went up where Thomas was confined, intending to warm that evening with her scented presence.

However, young Thomas immediately drove her away, down through the narrow stairwell, brandishing a torch. That night two angels appeared to him as he slept, girded him with a mystical belt of purity, and strengthened his determination to remain chaste and celibate. We read from the positio, the official records of his canonization, the words spoken by the angels:”Behold, we gird thee by the command of God with the girdle of chastity, which henceforth will never be imperiled. What human strength cannot obtain, is now bestowed upon thee as a celestial gift.”

On his feast day, January 28, I pay tribute to St. Thomas Aquinas, a Dominican like Fr. Gerard Francisco Timoner III, O.P., first Asian elected as Master of the Order of Preachers, and Fr. Rolando de la Rosa, O.P, former Rector of the only Pontifical and Royal University of Sto. Tomas (UST) in the Philippines (established in 1611). I also pay tribute to my alma mater so named in his honor, where my old gray matter was once trained in the sharpest use of analysis and synthesis.

The good examples and the academic lessons they imparted lingered in my thoughts, particularly those of Thomistic metaphysics and epistemology, even while I was writing my doctoral dissertation at the University of Navarra in Pamplona in the early 1990s. To them I give back my deepest  respect and gratitude.