Paying It Forward: Filipinos who endure, then help others make it in Canada

Paying It Forward: Filipinos who endure, then help others make it in Canada

By: Isabel Buenaobra - @inquirerdotnet
INQUIRER.net US Bureau/Manitoba Correspondent / 01:35 AM January 05, 2018 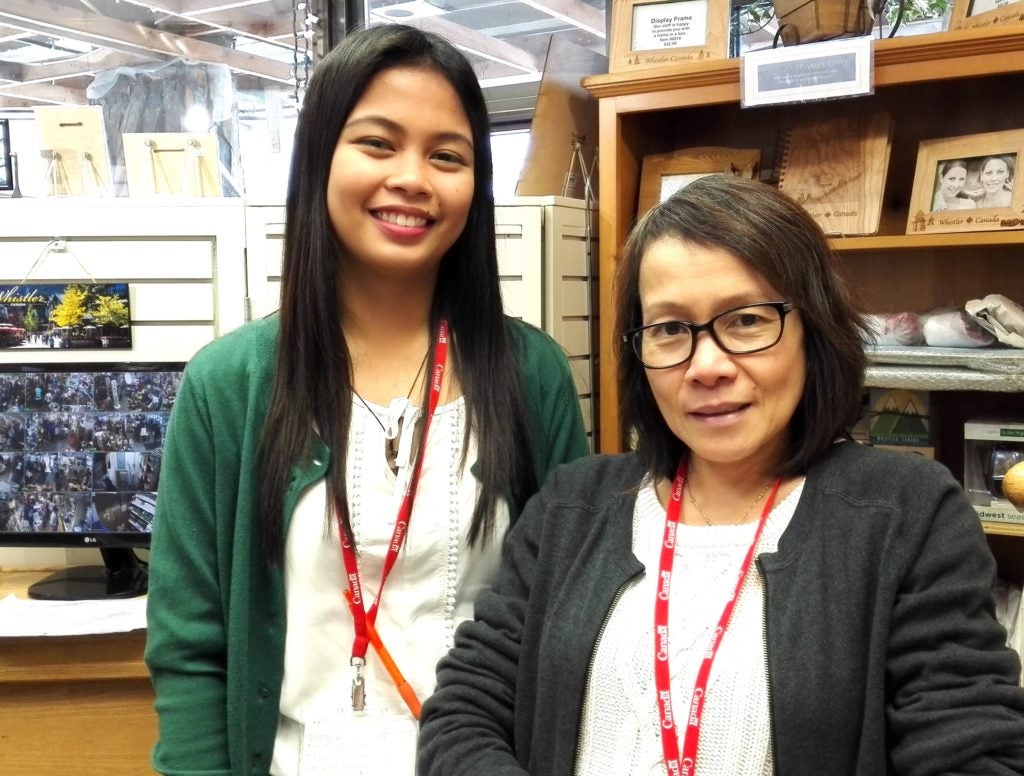 WINNIPEG, Manitoba — Filipino Canadian Gigi Molina entered Canada as a caregiver 14 years ago. Currently working in a gift shop in Whistler, British Columbia, Gigi failed to hold back tears when recounting the sacrifices she made to raise her two children.

A solo parent, she endured the years away from her children, never flinching from hard work and not minding the loneliness for she knew her children’s future depended on her. It was difficult and ironic, she said, to give care to foreigners and leave the caregiving of her children to others. But she persisted, prayed fervently until she secured permanent residency and petitioned for her kids.

Reunited with her family, Gigi couldn’t be more grateful. Canada has given her a new lease on life; both children are college students in the University of British Columbia. As a solo parent, she learned that women should stand on their own, be resourceful, educate themselves and learn to love themselves.

She considers each day as a “thanksgiving” day. One does not need to wait for an occasion or a holiday to give thanks to the Lord she says. Grateful for the happy ending to her years of sacrifice, she helps other Filipinos by paying it forward. Recently, she helped a niece immigrate to Canada so she, too, could have a better future.

Jenny Macaraeg immigrated to Canada eight years ago as a provincial nominee (a fast-track option for permanent residence status). An uncle had supported her immigrant application, and in turn, Jenny paid it forward and did the same for a cousin, Bernadette Corpuz. 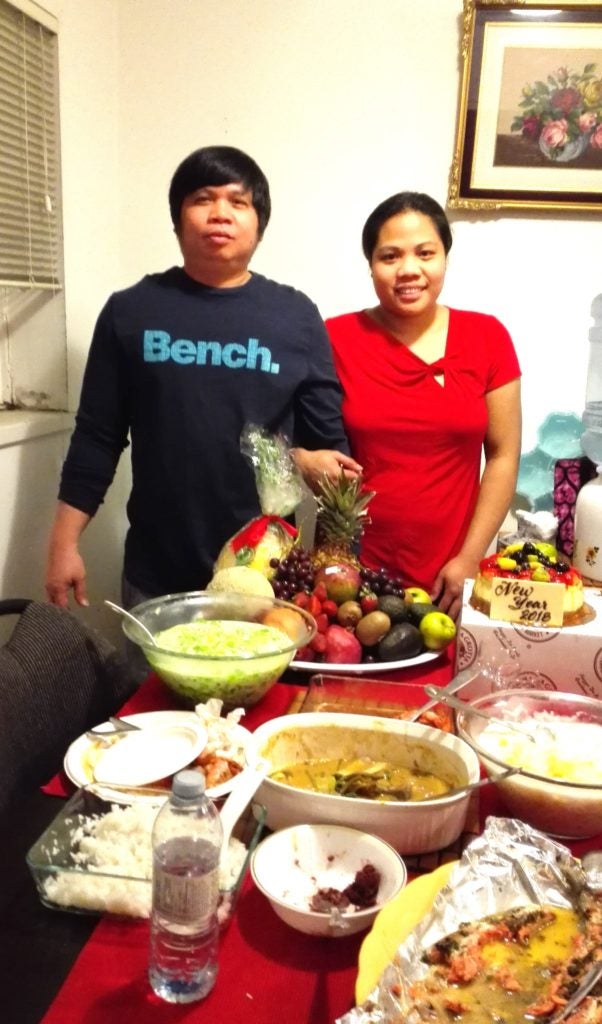 As a sales associate, Jenny goes home to the Philippines every two years to visit her parents and siblings. She confirmed the loneliness she experienced in the first few years. An extrovert, she was used to outdoor activities and socializing back in the Philippines, but this changed when she immigrated to Canada.

After a couple of years her husband, Raffy, followed her. They have both adjusted to life in Canada, including its harsh winters, which can be colder than Alaska’s and the North Pole’s. Depression is a reality in North America, particularly because of the tough winters. With longer nights, darkness can envelop the surroundings as early as 4 p.m. and limit residents’ activities for half the year.

Like Gigi, Jenny has a lot to be thankful for. She had survived a severe illness caused by the brutal weather and had saved enough to start a water-refilling station in the Philippines. She wishes that 2018 will be a better year for the Philippines.

As for herself, she hopes for an addition to the family, a baby to complete her life. In the meantime, she advises would-be immigrants to conduct research on the host country, know its culture, be resourceful and more importantly, leave the bad habits behind.

Gigi’s and Jenny’s stories are not unique. There are hundreds of thousands of Filipinos who have left their homes and serve as caregivers, nannies, teachers, domestic workers, cleaners, health care workers to start new lives and support their families back home.

To integrate in their adopted countries, support networks of churches, alumni associations, NGOs and volunteer organizations have assisted them. For instance, parishioners of the St. Mary’s Cathedral in Winnipeg have collected donations of winter clothing and distributed these to new immigrants to help them weather the harsh winter.

Others from different religious denominations have provided newcomers with kitchen supplies and food, and even offered their homes as halfway houses. Because others have assisted them when they were newcomers in Canada, they too, assist others and pay it forward.

In the East Coast, Filipinos under the internship placement programs have been supporting each other in adapting to the environment and culture of their host country.

Noelle, a culinary intern at the Omni Mt. Washington Hotel, rotates among the ski resort’s various restaurants. She works long hours, some of which begin as early as 3 a.m. She enjoys her work and is supportive of colleagues who are students and professionals from South America, Europe, and Asia. 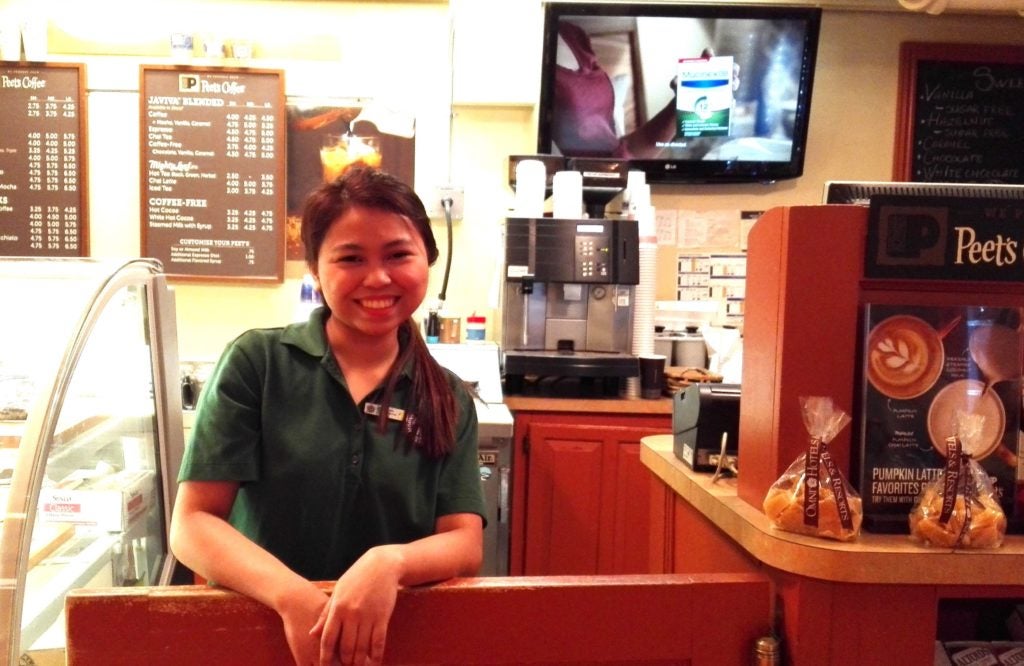 She helps fellow interns by driving them during errands, allowing intern-dormers to use her kitchen at her apartment to cook meals (as dormers don’t have their own kitchen), and gives advice to younger colleagues, who, as first-timers in the U.S., can be vulnerable to homesickness.

She, too, benefited from the kindness of previous interns who, prior to returning to the Philippines in October, had given her kitchen utensils, food, toiletries and houseware. She laughs when she recalls that she didn’t have to buy groceries for weeks because of their kindness.

To pay it forward, she will do the same for incoming interns before she returns to the Philippines in May.

She advices 2018 interns to leave behind their childish ways and feelings of entitlement, learn to adjust and adapt to the culture, support each other, and pay it forward.

Estela Mae Salimbagat, an H&R management graduate and intern at the same hotel, agrees; 2017 has been a trying but fulfilling year for her. She experienced bouts of homesickness, especially during Christmas and New Year. For her it was worth it, for she learned to be independent, to be a team player, to save money and control her temper while undergoing the internship.

She wishes for a more peaceful, kinder, and less violent world. She hopes she can save enough to help her family and to likewise, pay it forward, and help other people, too.