Happy New Year to all you global Filipinos, wherever you are.

Just a few days into 2018 and we already know that among Donald Trump’s resolutions was nothing about an end to his potentially dangerous habit of tweeting.

Trump’s latest tweets continue to alarm anyone who feels the president of the United States should be without question the most trusted man in the world.

Instead, we begin the new year with more of what we hoped would end when Trump got a much needed, last minute legislative victory on taxes at the end of 2017.

But why should we have expected a new sense of grace from the administration??

Trump’s the indiscriminate and loutish president who feels he’s above it all, and that’s all we can ever expect.

In the first business day of the year, Trump  recklessly made  statements on his official Twitter account that call in to question his leadership, public trust in American institutions and even trust in  the very democracy which he is supposedly honor bound to defend and uphold.

To anyone who thought all Trump needed was time to get his presidential sea legs in a trial first year, well, the full year is just about up and Trump still thinks he’s auditioning for a prime time slot on Fox News.

But the tweet about North Korea takes the big lumpia.

It was irresponsible and potentially dangerous: But it’s also disrespectful in a racist way. Trump is bigger and better? Because he’s whiter and American? His “button” works?

But he’s more than that.  He’s in the most powerful position in the world.

And what’s he doing? He’s denigrating the office of the presidency and the image of the U.S.

In the Philippines, where North Korea is no joke, Trump’s loose lips must be unnerving.

The RP has Duterte so maybe Trump’s bombasts seem like nothing.

But how can you read Trump’s anti-diplomatic tweets and not think we are closer to some kind of altercation with every utterance?

Surely, it helps to justify Duterte cozying up to China. The U.S. under Trump hardly seems reliable.

Indeed, there’s much in the first day tweets to indicate that we are in a new realm in world democracy when the very model for the Philippines and the world starts sounding as if it feels dictatorship may not be so bad.

In this next tweet, Trump calls into question Hillary Clinton’s top aid, Huma Abedin with a loose and slanderous allegation, and then suggest throwing her into jail.

That’s exactly what dictators do to political opponents. 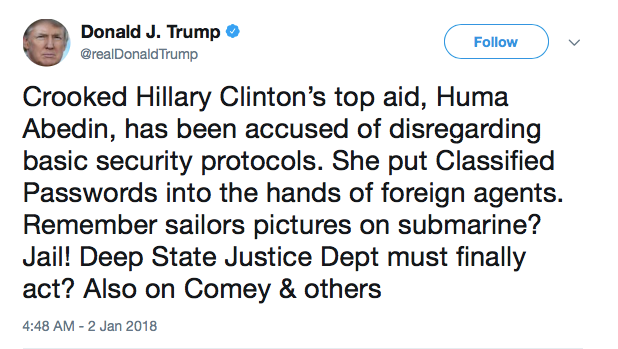 The new year is upon us and if you were going to give Trump a clean slate, he’s seems intent on mucking things up almost immediately.

Of course, Trump has established a pattern.

The Washington Post’s Fact Checker column put Trump’s misleading statements or lies at 1,950 for his first 347 days. Granted, politicians are allowed a certain leeway for statements that aren’t exactly on the nose. That’s diplomacy and politics. But Trump takes his rhetoric to a new low. He’s not even subtle. It’s getting to the point where nothing he says can be trusted.  In doing so, Trump is using up all the stored credibility of his office, creating a sense of distrust and uncertainty in him and America.

If you had hope in 2018 being different, the president’s tweets clearly suggests we can expect more of the same.

Emil Guillermo is an Inquirer.net columnist based in North America.