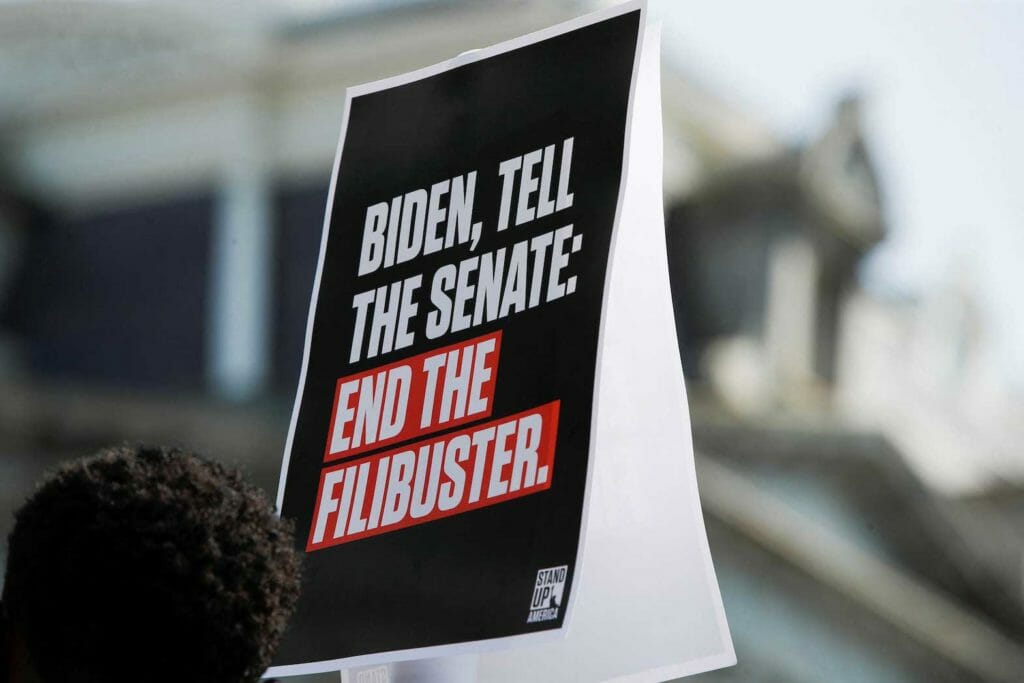 A sign is urging the Senate to “end the filibuster” and pass voting rights legislation is seen during a news conference near the White House in Washington, U.S., August 12, 2021. REUTERS/Gabrielle Crockett

WASHINGTON  – Democrats’ razor-thin majority in the U.S. Senate has led to them making new calls to change the chamber’s longstanding “filibuster” supermajority rule to allow them to pass a voting rights bill that President Joe Biden will urge  action on Tuesday.

Critics say the “filibuster,” which requires 60 of the 100 senators to agree on most legislation, is an anti-democratic hurdle that prevents Washington from addressing pressing problems.

Supporters say it forces lawmakers to seek consensus, serves as important check on the party in power and ensures that major laws that affect American life don’t change radically with every election.

Once a rarity, the filibuster is now routinely invoked. In recent months, Republicans have used it to block voting-rights bills and bring the United States perilously close to a crippling debt default.

Democrats could use their razor-thin Senate majority to eliminate the filibuster altogether. But centrist Senators Joe Manchin and Kyrsten Sinema oppose this move, saying that it will shatter the few bipartisan bonds that remain and give Republicans free rein if they take a majority in the Nov. 8 midterm elections.

Senate Republican Leader Mitch McConnell has warned that his party would use other tactics to bring the chamber to a halt if the filibuster is eliminated.

WHAT IS THE FILIBUSTER?

Unlike the House of Representatives, the Senate was set up to allow for unlimited debate. In the 19th century, lawmakers developed the filibuster — a word derived from Dutch and Spanish terms for Caribbean pirates — as a way to talk a bill to death.

Then-Democratic Senator Strom Thurmond set the record in 1957, when spoke for 24 hours and 18 minutes to block a major civil rights bill. Democratic Senator Chris Murphy spoke for nearly 15 hours in 2016 to press for gun-control legislation and Republican Senator Ted Cruz spoke for more than 21 hours in 2013 to protest President Barack Obama’s signature Affordable Care Act. None of those efforts were successful.

Senators agreed in 1917 that a vote by a two-thirds majority could end debate on a given bill. That majority was reduced in 1975 to three-fifths of the Senate, currently 60 senators.

Under current rules, senators don’t need to talk to gum up the works — they merely need to register their objection to initiate a filibuster.

Over the past 50 years, the number of filibusters has skyrocketed as Democrats and Republicans have become more politically polarized. From 1969 to 1970 there were six votes to overcome a filibuster, the nearest reliable proxy. There were 298 such votes in the 2019-2020 legislative session.

WHY IS THIS A PROBLEM FOR DEMOCRATS?

Democrats control 50 seats in the Senate, which allows them to eke together a majority with Vice President Kamala Harris casting the tie-breaking 51st vote when needed. They can’t overcome filibusters unless at least 10 Republicans vote with them.

Democrats were able to bypass the filibuster to pass Biden’s $1.9 trillion COVID-19 stimulus plan using a special process known as “reconciliation” that only requires a simple majority for certain budget bills. But that process is subject to complex limitations and cannot be used regularly.

Republicans have blocked many other Democratic priorities, though 19 of them did vote for a $1 trillion package to revamp the nation’s roads, bridges and other infrastructure.

CAN THE FILIBUSTER BE CHANGED?

There have already been changes.

In 2013, Democrats removed the 60-vote threshold for voting on most nominees for administration jobs, apart from the Supreme Court, allowing them to advance on a simple majority vote.

In 2017, Republicans did the same thing for Supreme Court nominees. Both the 2013 and 2017 Senate rule changes were made by simple majority votes.

Some Democrats have called for eliminating the filibuster entirely, but they lack the 50 votes needed to take that step.

Democrats plan to vote sometime over the next week to scale back the filibuster so it would not apply to voting-related legislation. But it’s not clear whether they have the votes for this either; Manchin said last week that he would prefer to get some Republican buy-in for that change.

On Sunday he said he might support making the tactic more “painful” by requiring senators to keep talking on the Senate floor.

Biden, who spent 36 years in the Senate, long supported the filibuster but has grown more open to changing it as Republicans have blocked several of his major initiatives over the past year