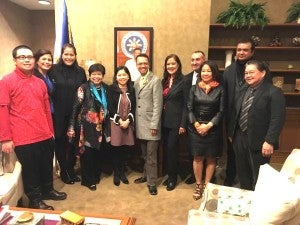 NEW YORK CITY – Young artists affected by autism will showcase their hand-painted piña fabrics in a runway show at the Philippine Center here on April 3 to 7. Their works are the result of an innovative art therapy program started a year ago. 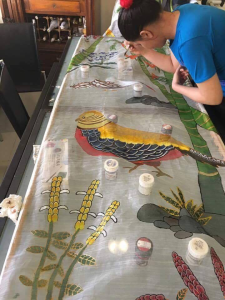 Hand-painted art works by children in therapy will be used by Patis Tesoro and Anthony Legarda in the upcoming New York fashion runway on April 7, 2017. Other works will be displayed and auctioned off for the benefit of children with ASD and supporting the art therapy program in the Philippines. CONTRIBUTED

The Project includes an educational art therapy program and a series of fashion shows. It involves ongoing workshops where students produce original works of art on canvases made of piña cloth. 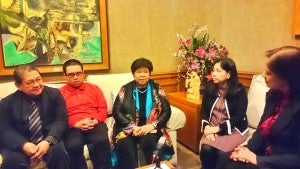 Erlinda Borromeo (center) relates the story of how she discovered that her grandson had ASD at 18 months of age; Julien (seated next to her) is now 18 years old. Borromeo’s husband, Charlie Borromeo, is on the left, Consul General Tess Dizon De Vega is on the right.INQUIRER.

FAAB artists’ creations are transformed into fabulous outfits, gowns and accessories by distinguished fashion designers and brought to runways around the world, from the Philippines to San Francisco and Geneva.

A mini-show was presented last September 22 during the visit of Health Secretary Paulyn Ubial, a champion for autism and supporter of mental health program.

Founder Erlinda Borromeo and Executive Director Thomas Natale made the announcement to the local press and community leaders.

FAAB will show the works of children affected by autism spectrum disorder (ASD). The young artists’ hand-painted piña fabrics will debut in New York at the FAAB International Runway.

The Foundation itself was started when Borromeo discovered that her own grandson was afflicted by the condition.

Since its inception, the FAAB Project has gained noteworthy attention from national and international communities and organizations that share the goal of maximizing the potential of children and adults with autism and empower them to live meaningful and productive lives.

Autism is a neuro-developmental disorder that affects the person’s social, communication and behavioral capabilities, creating serious challenges in learning and development. It knows no boundaries, occurring in all racial, ethnic and socio-economic groups.