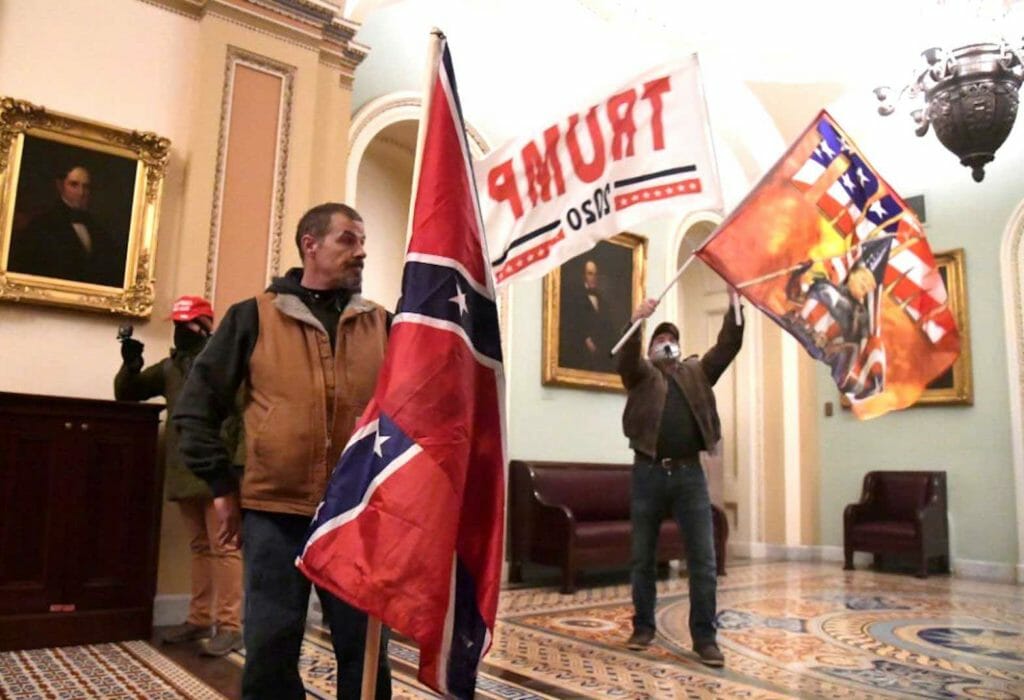 Supporters of President Donald Trump demonstrate on the second floor of the U.S. Capitol building in Washington near the entrance to the Senate after breaching security defenses Jan. 6. (CNS/Reuters/Mike Theiler)

Oh yes, this is the anniversary of the Jan. 6 Capitol Riot. Please don’t call them “insurrectionists.”

Call them what they are. Lawless, unprincipled rioters. Right-wing looters. Deluded Trump supporters. Acolytes of an authoritarian.

Insurrectionists take down authoritarians like Trump in the name of democracy. Insurrectionists are serious people, not armed lunatics lured by the smell of burnt gunpowder and the sound of  broken glass. “Insurrectionists” is the legal term for people intent on revolt against an established government, in this case democracy.

The Jan. 6 rioters were anti-democracy to say the least.

So leave the term “insurrectionist” for the history most Americans don’t even  know. Leave the word to describe the Filipinos who after the Spanish American war, stood up to the American imperialists and established a Philippine democratic republic in Asia that was so significant it ended up starting the Philippine American War.

Compared with that, the Jan. 6 rioters couldn’t carry a Filipino’s jock strap. As they say, the Jan.Sixers just don’t have the balls.

Or maybe if all those subpoenaed by the bipartisan committee in Congress investigating the matter comply, we may actually uncover the truth of that day. That instead of a revolt in the name of democracy,  what we had on January 6th 2021 was essentially a coup led by forces loyal to an ex-president who lost the election in November 2020.

That’s why the work of the committee is important–for the sake of our democracy.

Jan. 6th should be Democracy Day in America.

When the vote of the people was protected by an outmanned Capitol Police force that thwarted an unruly mob out to destroy the basic right of all Americans. The mob couldn’t stop the votes from being certified and the election made official. Democracy survived January 6th.

The real insurrectionists in history

And let’s not forget those real “insurrectionists” of the Philippines.

Though they fought bravely and were defeated in the end, were they really defeated?  It took nearly 50 years, but ultimately the U.S. realized the idea of the world’s leading democracy being a colonizing force was a bad look.

It has left scars that some would say are still open wounds.

But when you tell people about the history of the Malolos Republic, and the establishment of the first democratic state in Asia, and the Philippine American War, most today will say, “Did that really happen?”

It did. It was a paragraph, if that in your 9th grade U.S. History textbook.

Nearly a million Filipino casualties resulted from the war. But the lasting aspect of the war has been what I call the “Colonial Fog.” Something happened, but how can you remember when it’s never really taught? Or when the information and documents stay untaught, unexamined, buried in research libraries few people visit.

But something did happen. And you don’t have to be a scholar to realize it.

The experience has given Filipinos a psychological ailment in our DNA that’s passed down for generations. You may call it “Colonial Mentality.”  But It has effected affected Filipinos from 1902, the official end of the Philippine American War, to now.

Do you ever wonder if you’re good enough? Do you think the colonization period was a good thing because it got many of us to America?

Do you think that, well, we got English out of the deal?

Between the “fog” (the lack of knowing our history) and the “mentality,” the colonial impact is always there

I’ve been writing about this practically my whole amok life. But lately I read a piece by a young American Filipina, still struggling to make sense of the colonial past.

Oakland resident Eleanor Wikstrom is a second year student at Harvard. And her essay published last December in the Harvard Crimson made me think about the things I experienced more than 40 years ago at Harvard.

The Filipino American experience hasn’t changed much. Wikstrom just wanted to know why there weren’t Tagalog courses at Harvard? There is no good answer.

And then in researching the colonial period, she found the confirmation of the history seldom taught. That the first education superintendent of the Philippines under President Taft included academic elites like one Fred W. Atkinson, a Harvard graduate, who was charged with making English the new national language.

The better to subjugate the people whom the elites considered no better than  illiterate savages.

Ironic then that she learns this at the very school that attempted to counter authentic Filipino identity with a colonial salve.

As it was for me, assembling the Philippines’ colonial puzzle has been a source of both irony and trauma for Wikstrom. “Of the jagged wound that is U.S. colonialism in the Philippines, a gun is smoking in Harvard’s hands,” she writes.

I contacted Wikstrom for a conversation about our experiences with the “colonizing force” separated by generations to learn more about the enduring presence of the colonial fog. Listen to the podcast on Emil Amok’s Takeout on Apple, Spotify, and wherever you get your podcasts. Or see it posted on www.amok.com

So this year, I hope you take my advice. To just rebirth ourselves. Baby, baby, baby, please.

We all deserve it after 2021 and 2020, the twin towers of Covid, and now with Omicron following Delta? (Remember it’s pronounced “Awe-micron,” from the Greek, not the Valley Girl, “Oh-migawd.” Win a bar bet tonight at your safe and mask-free zoom cocktail party.)

We could all use a re-birthing, a new beginning right about now, don’t you think?

Just do it. This year it’s DIY. Be the New Year’s baby.

Think of the final push, the drive through the birth canal like gliding into life with ease. Pain? What pain? We’re bringing the joy, and newness. And after what we’ve been through, we all need that. A fresh start.

Normally, a columnist reviews the year past, but after this particularly grim year, we can’t wait for someone else’s baby.

We need to be the baby. We all could use that baby perspective. Maybe not the diaper part. But what’s a little poop after 2021?

Let’s all be looking at life like a baby. And if you’re thinking, “I was with you until the diaper part, Emil.” OK, I hear you. So you take your past and learn from it. Don’t dwell. Use the past to build back better. No matter what Joe Manchin thinks.

So I’m fresh and new. But I’m not dumb. In keeping with my New Year’s Covid Resolution to “Stay Negative,” I’m staying in. A self-lockdown. Forget about John Locke, the philosopher of individual  who may be fan the anti-vax, give-me-liberty-or give-me-death. No thank you. The U.S. is surging in cases and while there are some breakthrough cases, the unvaxed are getting hit the hardest.

I’m all for freedom, but this is a matter of public health. If you’re going around, unvaccinated, you are only helping the spread of the virus which is looking for a host like you to glom on to.

The spread rate in some states is as high as 40 percent.  Five percent is considered acceptable, the lower the better. But 20-30-40 percent spread rates?

How much risk are you willing to take? Is whatever you want to do worth getting sick to the point of death?  The U.S. is approaching 850,000 deaths due to Covid. You want to be a number? I’d rather be the New Year’s Baby. Be safe. To hell with Philosopher John Locke. Individual liberty? Public health, I say.

Lockdown for now. Stay safe and healthy this January.

Emil Guillermo is a journalist and commentator. He writes his Amok column for the North American bureau. Listen to him live at 2p Pacific on YouTube, Facebook @emilguillermo.media, and Twitter @emilamok. Or see recordings on www.amok.com