Serving God through art and nursing 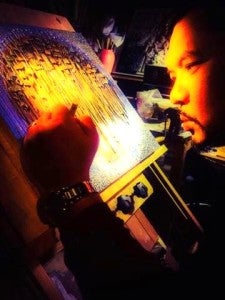 For Jun Gueco Cruz painting is communing with God. CONTRIBUTED

SAN FRANCISCO — In a dialysis center in Philadelphia, Pennsylvania, the nurse prepares to go home after a long day of taking care and assessing patients. After his shift, he changes from scrub suit into ordinary clothes and assumes another persona–an artist.

Jun Gueco Cruz, 43, a dialysis nurse from Angeles City, Pampanga is also known as Junbap among artist friends. His profession as a nurse demands much of his time. At home, Cruz devotes at least an hour for his art. Despite the rigors of his profession and the call of his art, Cruz is a doting father to one-year-old daughter, Elioenai (meaning, eyes are towards God), and two grownup kids.

The artist in Pampanga

Cruz started young as an artist influenced by the lively arts of Pampanga. In the early ‘90s, while still in the nursing school, he crafted hand-made greeting cards called Likha’t Ekspresyon, sold in various bookstores and gift shops in Pampanga and in Manila for 30 pesos. Besides painting he also did murals and sculptures. 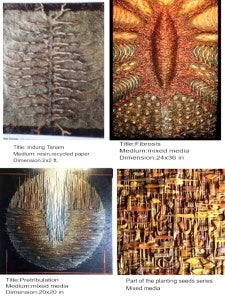 Cruz became a member of Pampanga Arts Guild. He also attended various exhibits, art congresses and festivals in Pampanga, Manila, Baguio and Tarlac, where he met several artists who encouraged him to pursue his passion.

As members of Art Youth, Cruz and the group joined a mural painting competition sponsored by Remy Martin. The group bagged the 1994 Grand Prize-Remy Martin Open Art National Mural Competition. The mural depicting Filipino values was installed at Rizal Park that year. Afterwards, his paintings gained recognition from the Philippines Art Awards. He also won an award from Art Association of the Philippines for his sculpture.

Cruz had a solo exhibit in 1997, “Tanatanaman” at Culture Shack Gallery Cafe in Angeles City, Philippines. He had collaborations with the Pampanga Arts Guild, and their works were exhibited at the Metropolitan Museum, Cultural Center of Philippines, Malacanang, National Museum and at the National Commission on Culture and Arts.

“It was fun doing what I loved in the Philippines. But I could barely buy materials, so I used available indigenous materials such as pieces of woods, wires–anything,” Cruz laments.

Van Gogh and Salvador Dali are Cruz’s influences in painting; August Rodin in sculpture. He did not have any formal training in art but relied mostly on experiments and observing the local artists in Pampanga. Cruz owes a part of his growth to senior Kapampangan artists who were unselfishly sharing their knowledge with aspiring artists.

In 2008 Cruz and his family immigrated to the United States. Eventually, he passed the state board of nursing exam. He continued trying to be creative, but the long hours of work and time for his growing children left his works unfinished.

It was only a few years ago when Cruz’s older kids were already in the university that he decided to pursue his art with ardor, and he rediscovered his purpose in life.

“I am happy whenever I sold an artwork, though I consider myself a beginner again because I was stagnant for many years,” Cruz explains.

“My studio is also my prayer room. It is also my time and place to talk to God while I’m doing my artwork,” Cruz says.

Cruz experimented until he could finally express himself freely, showing his medical background, love for the environment and pursuit of spiritual growth.

“I am always fascinated by the anatomy and physiology of the human body. The cellular structures forming specific organs and the functions of each for the purpose of sustaining life is an art–a Divine art,” explains Cruz.

Cruz believes that art is not just about skills; it must also speak of life and responsibilities. From conceptual art Cruz’s works evolved into spiky structures which is evident in his “Indung Tanam (mother plant)” created in the mid-‘90s presenting the importance of nature. 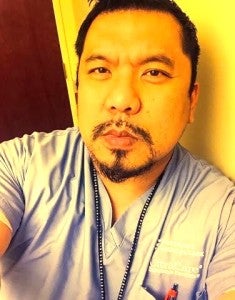 He then created worm-like images, which speak of the functions and healing of human cells. Cruz explains that biomorphic designs and shapes represent the physical world and also depict the importance of a person’s spirituality.

His art is also textural because of the dimensional characteristics of the images. He uses mixed-media: acrylic paints; resins; pens; markers and marble powder.

“Life is like making artwork. We learn from experiences that allow us to mature in some ways until we learn our purpose in life. I discovered that God has a purpose in my life. For me, it is to serve God and the people through my profession as a nurse and my passion as an artist,” Cruz explains.

To the aspiring artists he says, “Focus on your chosen art and be consistent. Life is just like making artworks. We undergo processes and use different materials. We keep on experimenting and learning until we get what we wanted. God gave us talents and abilities that we need to cultivate according to His purpose. It is just right to serve and glorify God through our talents.”

Some of Cruz’s works are at the Linus Gallery Texture Art Exhibit and 3rd Street Gallery Community Art Exhibit in Philadelphia. He is a member of CIVA-Christian in visual arts and CFEVA-Center for Experimental/Emerging Visual Artists. He will participate in the prestigious Florence Biennale with the theme Earth: Creativity and Sustainability in Florence, Italy on October 6-15, 2017.