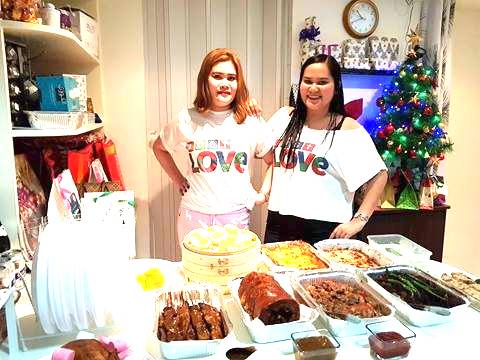 Filipino recipes are not easy to prepare because of ingredients that are not readily available in some stores abroad. Even if available, the prices are higher most local alternatives. Most Filipinos still prefer “Filipino” soy sauce for their pancit or barbecues.

Since Christmas is another working day for Filipinos in non-Christian countries, and even for some Filipinos in North America, preparing home-grown food must suffice for the Paskong Pinoy experience.

Cathryn Liboro, a private caregiver, and her family in Texas hurriedly prepared their Noche Buena feast on the midnight of December 23. It is “advance Noche Buena” because she, her husband, and her mother have 24-hour duty from the 24th until Christmas Day. 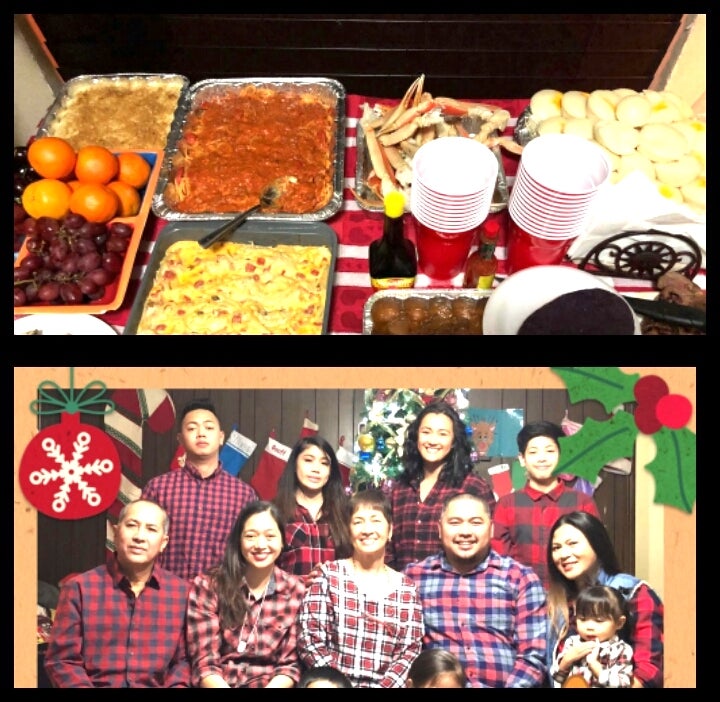 “It’s our ninth Christmas here. My sisters are in Australia and the Philippines. I just make a photo collage of our families so we can still be together even in pictures,” Cathryn says.

Donna Rosete, a caregiver in Canada shares her lumpiang Shanghai and pancit with her co-workers in their care-giving facility during Christmas.

“They like lumpiang Shanghai. It is always the first to run out during our Christmas party,” Donna says.

Unlike Donna and Cathryn, Norman de los Santos who is married to an African American, cooks for his kids and wife.

Noche Buena in other parts of the world

The Tarriela sisters Ten, Che and Karen, have been celebrating Christmas in Dubai, United Arab Emirates for a long time. Their past Christmases in  Sablayan, Occidental Mindoro, are just distant memories; yet the sisters see to it that even in a non-Christian country the spirit of Christmas remains among them. 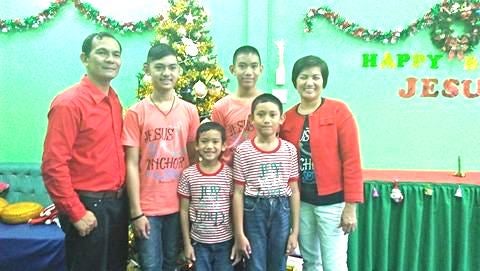 “We celebrated our Noche Buena with Filipino friends, our housemates also. We had dinuguan puto, barbecue, menudo, lechon belly and cassava cake. These are the food we have at home too,” Karen says.

Rexon Erasmo, a professor in UAE, celebrates Christmas with longtime favorites like spaghetti, lumpiang Shanghai and pork barbecue – if pork is available.

“UAE is now tolerant of other religions. We can hear Christmas songs, and the malls have decorations too. Muslims also celebrate with us. Many employers, including mine, give a rest day on the 25th,” Rexon reports.

It is her first Christmas away from home, yet Justine Grace Abrugena, a scholar of the Erasmus Mundus in the European Union, shares Paskong Pinoy with the Filipino community in Barcelona, Spain.

“Most of the food that I had at home are on the table but with additional ‘Bicol Express’, shrimp and the ‘yema cake’,” Justine beams.

But she says she still longs for the taste of her dad’s signature afritada, and her mom’s fried rice and Pinoy-style sweet spaghetti.

In Thailand, Ciara May Mabeza, a teacher in Bangkok, celebrated Noche Buena with her parents, and siblings. 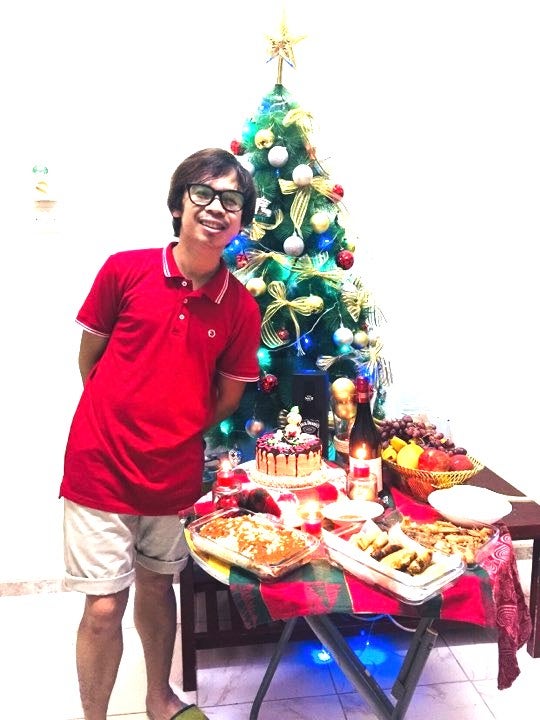 Teresita Casabuena, also a teacher, and her family have been celebrating Christmas in Thailand for the past six years and counting. Every year, Filipino and foreign friends come to their home to celebrate to partake an early Noche Buena feast of kare-kare, pansit, kaldereta, lumpiang Shanghai and leche flan.

“We have to make it early, because we have classes in the morning. Christmas morning is another working day for us,”

Connection to the past and the future

For most Filipino families, each dish has a special meaning especially during the Christmas season.

Growing up in a big family in the Philippines, Cathryn, says that beef asado is a special recipe of her grandmother, which they brought to the America and is always the “star” of their Noche Buena.

Donna remembers that lumpiang Shanghai and pansit were the usual Noche Buena feast of their family back home. Teresita’s children have vague memories of Christmas in the Philippines, so she wants them to taste and experience Noche Buena every year.

Dr. Leny Strobel, a retired professor at Sonoma State University in Northern California, says that serving traditional Christmas feasts means our refusal to forget. It is also our ways of making memories for our grandchildren and for ourselves since millions of Filipinos are now in the diaspora.

Norman de los Santos agrees: “The seasonal availability or rarity of the various ingredients and having enough of it to share makes holiday food important as a festive communal experience. Sharing a feast with people you care for brings about a feeling of warmth and closeness that we crave, especially during the cold winter or rainy season.”