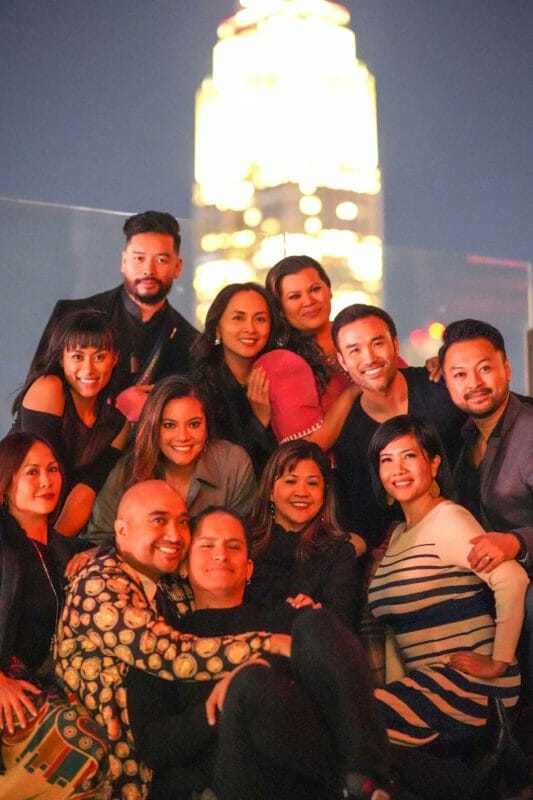 The idea for “Celebrating FilipinXcellence” was born after Kevin Nadal became the first Filipino distinguished professor at City University of New York in October. CONTRIBUTED

Shortly before warnings about the Omicron variant went into full force, a dozen Filipino Americans gathered at a cocktail lounge in New York City to celebrate their achievements during year two of the coronavirus pandemic.

The idea for “Celebrating FilipinXcellence” was born after Kevin Nadal became the first Filipino distinguished professor at City University of New York in October. (He is also the author of three new books, producer of “Larry: A New Musical” and equity trainer for the Los Angeles Lakers.)

At around the same time, Ernabel Demillo, the first Filipino American department chair of communication and media culture at Saint Peter’s University and a journalist at “Asian American Life,” won her first Emmy award.

The pair had initially planned on just the two of them celebrating, but the gathering grew when they thought about other Filipino Americans they knew who had accomplished notable feats in 2021.

“A big part of just this pandemic was that we were doing so many things independently in silos without a lot of support. And then just when we thought that we might get back to some sense of normalcy, the new variants hit, and so we go back to masks and sheltering in place and limiting our social interactions,” Nadal told INQUIRER.net.

“The greatest reward in itself was just to feel comfortable enough for us to all be in a safe space, a public space, to be able to hug.”

Other Filipino American celebrants were:

Nadal said the gathering helps with the Filipino American community’s visibility and representation. A common theme among those who attended was that they didn’t have mentors to guide them in their paths.

“We don’t have a lot of folks who are paving ways for us or even just validating us, or even giving you tangible advice for how to proceed. Like, how much of your culture and your identity are you allowed to talk about in these spaces?” he said.

The 12 attendees work in completely different sectors. everyone has faced parallel processes of being the first Filipino American achievers in areas like academia, entertainment and the arts.

He added that many credit where they are to a combination of luck, being at the right place at the right time, hard work and perseverance.

“For people to see that we’re out there, hopefully we’ll at least plant a seed that there are these possibilities for young Filipino Americans to go into arts, academia, journalism; they can become choreographers for major motion pictures, they can become children’s book authors, they can be activists — that they don’t just have to follow what their parents tell them or what they see; that so many opportunities are out there for them.”

Demillo echoed Nadal’s sentiment. “I remember hearing a speech from a mentor who was one of the first Asian Americans in their field, and she said we need to see this as more than an individual achievement, but a collective one.”

“It’s only when we acknowledge it can we sustain it. That’s the next step — opening the doors, building the seats so that we can sustain this progress. So, I hope by celebrating we can also elevate.”

Nadal said he wanted the gathering to pay homage to Oprah’s Legends Ball, a three-day celebration in 2006 that honored 25 influential Black women. He hasn’t thought about organizing a gathering like this for the Filipino American community on a regular basis, but he has thought about holding it in other parts of the country.