With warning for unvaccinated, Biden lays out battle plan against Omicron

With warning for unvaccinated, Biden lays out battle plan against Omicron

U.S. President Joe Biden announced on Tuesday more federal vaccination and testing sites to tackle a surge in COVID-19 driven by the Omicron variant, and said 500 million free at-home rapid tests will be available to Americans starting in January.

Biden offered both a warning to the unvaccinated, who he said have “good reason to be concerned,” and reassurance that those who are inoculated can gather for the holidays despite the new variant sweeping the country.

“No this is not March of 2020,” Biden told reporters at the White House. “Two hundred million people are fully vaccinated, we’re prepared, we know more.”

Biden’s remarks came as some cities and states imposed new measures aimed at protecting the public, including stricter vaccine mandates.

Striking a dire tone about the risks to the one-in-four American adults who are not fully vaccinated, Biden said they “have a significantly higher risk of ending up in the hospital or even dying.” 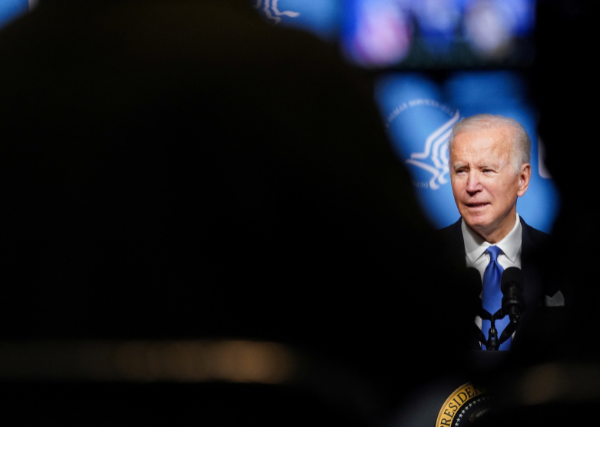 U.S. President Joe Biden speaks about his administration’s plan to fight the coronavirus disease (COVID-19) with the emergence of the Omicron variant, during his visit to the National Institutes of Health, in Bethesda, Maryland, U.S., December 2, 2021. REUTERS/Kevin Lamarque

Biden noted that former President Donald Trump has also received his booster shot. “Maybe one of the few things he and I agree on,” he said.

The measures laid out on Tuesday include activating new pop-up vaccination clinics run by the Federal Emergency Management Agency and federal testing sites starting this week, including in hot spot New York City.

Biden also said that some 1,000 military doctors, nurses and medics have been deployed to support hospitals already being overwhelmed by COVID-19 patients in some areas.

Biden’s pandemic response has been criticized for focusing on vaccines at the detriment of testing and masking, and for underestimating the impact of the anti-vaccine movement in the United States.

In his speech, Biden said Americans had a patriotic duty to get vaccinated and called out social media companies and TV networks for “peddling lies and allowing misinformation that can kill their own customers.”

The new federal measures will not be fully in place by Christmas, leaving many Americans scrambling to find available tests ahead of holiday gatherings and travel – and confused about whether it is safe to press ahead with their plans.

The Omicron variant, which was first detected last month and now accounts for 73% of U.S. cases, is causing infections to double in 1.5 to 3 days, according to the World Health Organization. It is not yet known whether it causes more serious illness than the Delta variant.

The rapid rise of infections is once again disrupting life across the country, canceling events from Broadway shows to professional sports.

In New York, Washington and other U.S. cities there were long lines for COVID-19 tests as people sought to find out if they were infected before celebrating the holidays. 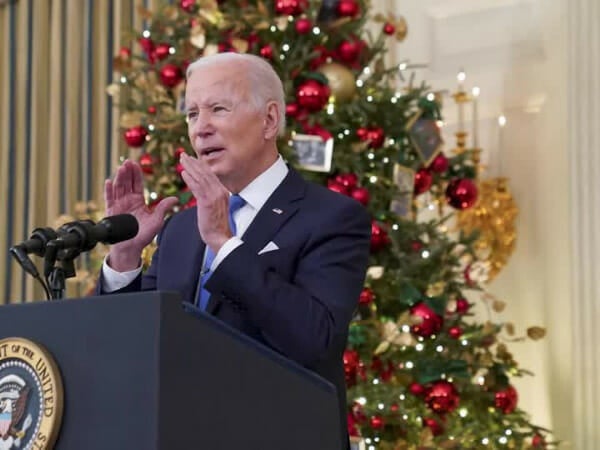 U.S. President Joe Biden announced on Tuesday the opening of more federal vaccination and testing sites to tackle a surge in COVID-19 cases sparked by the Omicron variant, and said some 500 million at-home rapid tests will be available to Americans for free starting in January. Gavino Garay reports.

“If I don’t, I could take a chance of sending it home to my family, and I’m not trying to do that,” said Ronald Tives as he lined up in Washington’s Farragut Square on Tuesday.

New York City Mayor Bill de Blasio announced on Tuesday a $100 incentive for residents who get a COVID-19 vaccine booster at city-run sites by the end of the year.

The city’s public hospitals said they would ban most visitors. Starting on Wednesday, only hospitalized infants and children, women in labor and dying patients can have visitors. They must be fully vaccinated or show a negative COVID-19 test from the past 24 hours.

In California, Governor Gavin Newsom said on Twitter that all healthcare workers would be required to receive booster vaccines. The state is expected to announce additional measures on Wednesday.

Chicago will require patrons to present proof of COVID-19 vaccinations for entry to restaurants, bars, gyms and some other indoor spaces, effective Jan. 3, Mayor Lori Lightfoot said on Tuesday.

Biden noted that the Omicron variant is so contagious that it will infect vaccinated Americans but that they will be far less likely to become seriously ill.

These breakthrough infections are rising among the 61% of the country’s fully vaccinated population, including the 30% who have gotten booster shots.

Omicron – what to know about the new Covid variant

Still, Biden told Americans that those who are vaccinated and follow guidance around using masks, especially while traveling, should feel comfortable celebrating the holidays as planned.

New COVID-19 cases rose 19% in the United States in the past week and are up 72% since the start of December, according to a Reuters tally.

The number of hospitalized COVID-19 patients has increased 27% this month, with hospitals in some areas already strained by the Delta variant that emerged earlier this year.

There have been more than 51 million infections and 810,000 coronavirus-related deaths reported in the United States since the pandemic began, the most of any country.