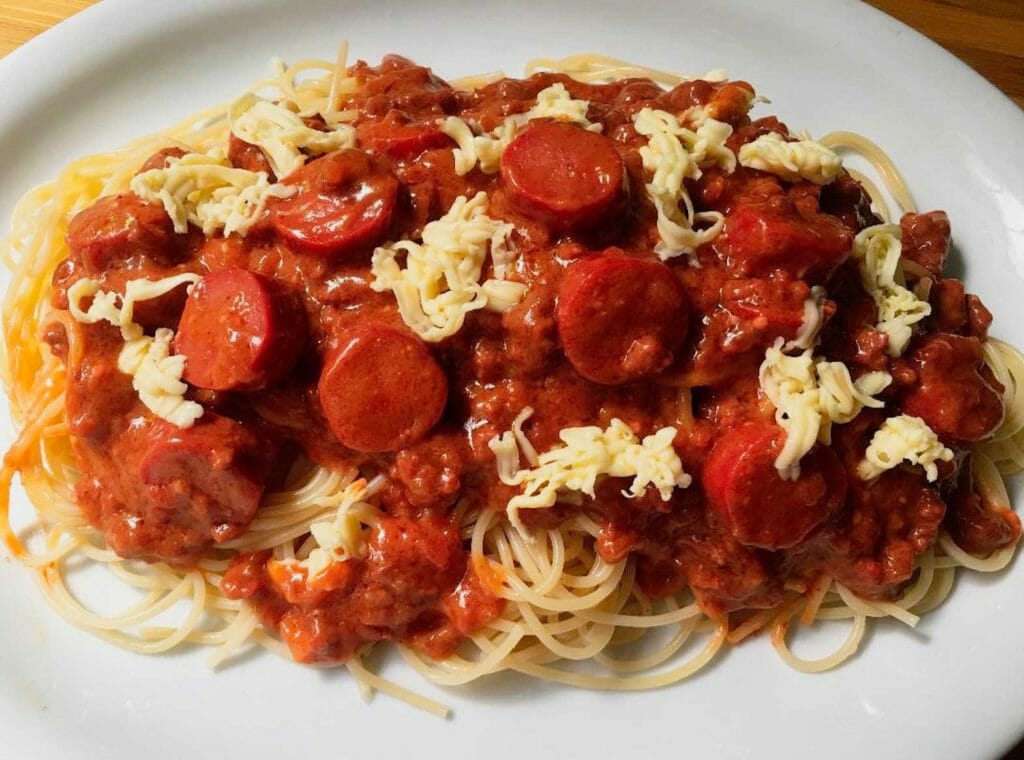 “I am an Asian American and a Filipino American. That’s who I am. Why should I deny it? I’m so proud of it. My favorite is my beloved Filipino spaghetti (from Jollibee),” says Joshua David, a 22-year-old second-generation Filipino American.

Joshua’s undergraduate thesis culminated in a mini-documentary, A Cult of Fried Chicken and Sweet Spaghetti: Expressions of Diasporic Filipino-American Identity Through Filipino Fast Food, which focuses on aspects of Filipino Americans’ food identities. With it, he earned a Bachelor’s of Science in Anthropology degree from the University of California, Los Angeles (UCLA) Lemelson Anthropological Honors Program in 2021.

The late great Tony Bourdain inspired him to delve into anthropology and food. He grew up watching Bourdain’s shows with his parents. A Cook’s Tour, Parts Unknown, and No Reservations were among Bourdain’s shows that explored cultures, food and travel.

“It was a form of anthropological storytelling through food. Food is not just food but a mechanism of communication. Bourdain was a big influence for me going into the world of anthropology,” Joshua says.

Joshua’s parents met in America. His mother flew to the U.S. with her mother and younger brother to live with her aunt in the San Gabriel Valley in Los Angeles. His father emigrated to America with some family members and settled in Rowland Heights. Siblings and their families followed later. 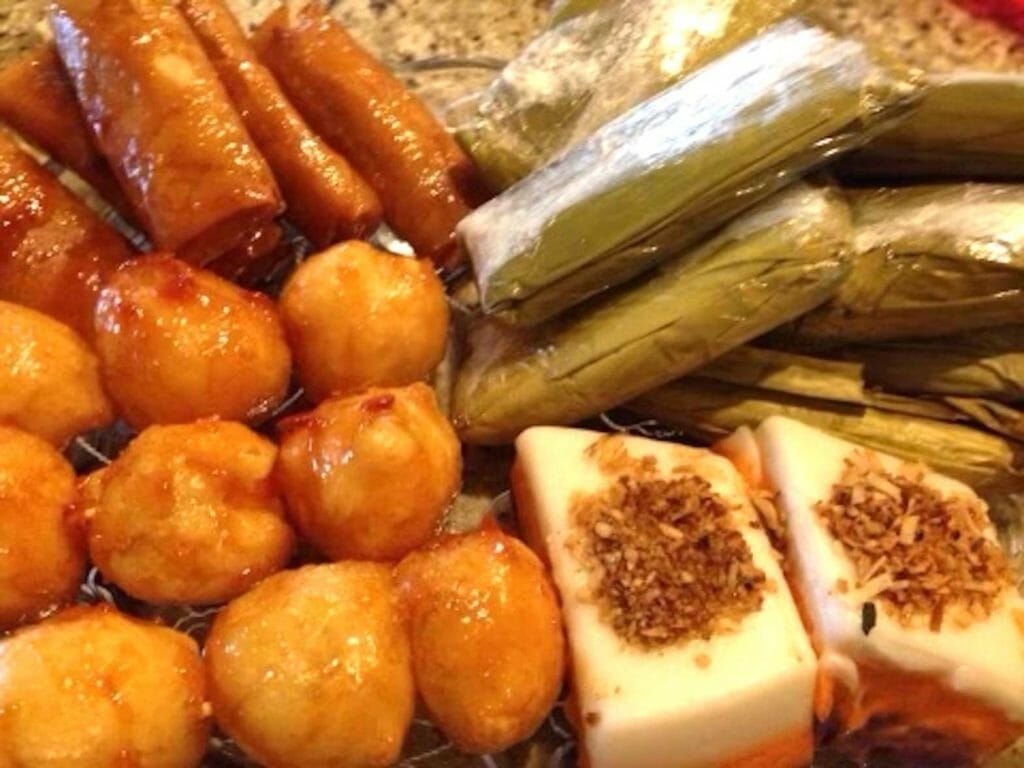 Like most second-generation Filipino Americans, Joshua grew up connected with his heritage because of Filipino gatherings. Joshua’s father, a native of Bacolod City, came from a huge family, while his mother, from Manila, has a small one.

Joshua describes his upbringing as Pan-Asian. His mother is Filipino Chinese. During weekends, they would go to dim sum. He would also meet different Asian Americans through church and basketball. Hence, even as a child, he was aware that Asian Americans are not monolithic.

In elementary and middle schools, Joshua was often the only Asian person. He mentions that back in 2007, it was still a “little taboo” to bring rice for lunch. Yet, he broke the mold and would bring lumpia, and other Filipino, Japanese or Korean dishes. In high school, he brought turon to school. But it was lumpia that expresses his Filipino-ness among people who are not Filipino.

“Lumpia is a way for me to share my culture with my friends. Whenever I brought my friends lumpia they would go crazy. It was such a foreign concept to so many of them it wasn’t just the fish sticks or chicken nuggets they were used to,” Joshua explains. 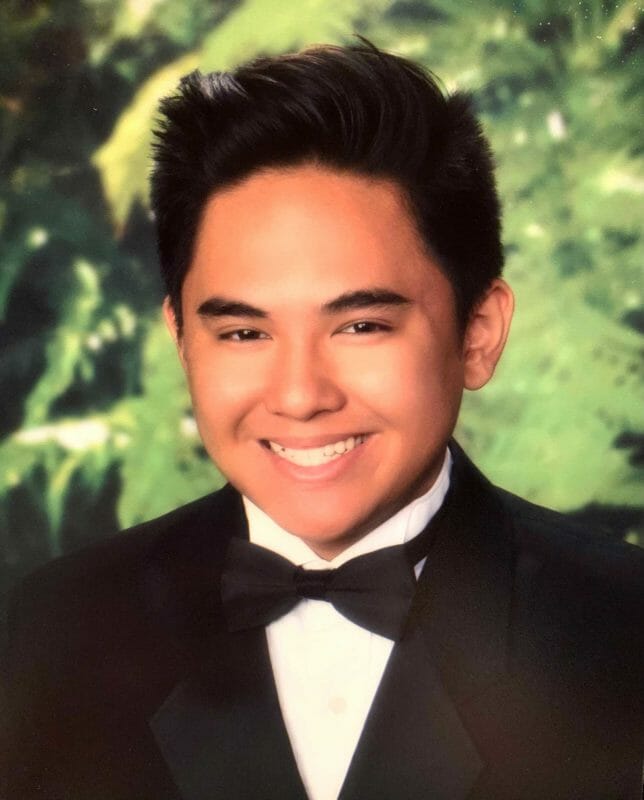 Joshua lives in West Covina, California with his grandmother who still cooks a lot for him. He has visited the Philippines several times, including doing fieldwork in Bicol and Ifugao in 2019 with Dr. Stephen Acabado and other students from UCLA.

“I remember meeting a bunch of my relatives from my dad’s side for the first time in Manila. I just remember the sheer magnitude of food that was consumed. Hypertension-giving food, like sisig, crispy pata. And pinakbet and sinigang,” Joshua laughs.

For his undergraduate mini-documentary, Joshua explored the Jollibee phenomenon among Filipinos, including young Filipino Americans.

In 2013, Season 1, Episode 2 of Parts Unknown, Anthony Bourdain and Korean American celebrity Roy Choi ordered an Aloha Burger, Halo-halo, and Spam Burger at a Jollibee Drive-Thru in Los Angeles, proving that Jollibee meals have a taste that even celebrity chefs approved. Currently, Jollibee has 69 stores in North America.

“Philippine pride,” Joshua found, is central to Jollibee’s appeal. Jollibee is the first Filipino-owned fast-food chain rapidly expanding in America, Europe, the Middle East, and some parts of Asia.

Jollibee lets Filipinos in the West to live out  Filipino culture, strengthens their Filipino identity and connection to the Philippines through its commercialized yet effective marketing.

“For anyone not at home, a part of them longs for it. It associates them with home, both real and imagined. When you walk into the restaurant, there are smiling Filipinos both eating there and featured in the restaurant’s interior décor. It’s a pocket dimension that reminds them: ‘This is the Philippines.’ This is especially true for some first generation Filipinos, who may not have eaten Jollibee back when they lived in the Philippines” Joshua explains. “They’ll eat Jollibee in the USA to get a taste of home.”

“Soul food isn’t always healthy. It’s not exactly the food you eat for nutritional benefit. It’s definitely nourishing something other than just your caloric necessity, something more involved with emotion and longing.”

Joshua’s personal favorite from Jollibee is the Jolly Spaghetti because of its unique complexity; its ingredients, pork/beef, sauces, cheese, hotdogs, spaghetti pasta and seasoning originated from different countries. He sees Filipino sweet-style spaghetti as a microcosm of Filipino cultures and a reflection of colonialism. It is also an amazing appropriation of American food that reflects Filipino ingenuity.

Food as a mechanism for communication

Food is a mechanism for communication, according to Joshua. So, it is not unusual for foreigners married to Filipinos to embrace the diverse Philippine cuisine, to “eat like a Filipino.”

However, Stephen Acabado, a prominent archaeologist at UCLA, and also Joshua’s thesis adviser says that some videos of foreigners relishing Filipino fare reduce Filipino foods and culture to red hotdogs, rice, banana ketchup and eating with hands or eating while putting a foot on the chair. These are practices in most Asian countries.

“It’s a reflection of the fact that Pinoy food hasn’t really developed an identity similar to those of Thai or Vietnamese cuisines. Filipinos find the representation funny because the diners are foreigners, which perhaps reflects colorism and pervasive colonialism in Philippine culture,” Acabado explains.

Joshua says that the odd phenomenon of white foreigners or Americans posting on social media may not have malicious intent. They may be funny, but these can be subtly disrespectful because the Filipina girlfriend or wife becomes a caricature. They may poke fun at her accent and eating habits. One can also argue that some of the clips are unintentionally sexist in their resulting objectification of Filipina women.

Food as a reminder of culture

This Christmas, the David household will eat a Noche Buena feast like most Filipinos anywhere in the world. They will have pancit, for long life, puto, bibingka, suman, lumpia, palabok, fruit salad, leche flan, crispy pata or lechon, and many more. Hence, reminding them of home in the Philippines.

“All those diabetes-inducing foods,” Joshua laughs.

For the Filipinos in the diaspora and the young Filipinos who have never been to the Philippines, Joshua has this to say:

“Filipino food is amazing. It’s a craze. It expresses who you are. It connects you to the food of where you had been. And it’s a reminder of the cultures. It is the ultimate mechanism for us to identify as Filipinos. Be proud of what you eat and who you are. Being Filipino is awesome. Just like a party tray of Jolly Spaghetti.”