Stephen Curry broke the NBA record for most career 3-pointers Tuesday night when the Golden State superstar drained his second trey in the Warriors’ game at the New York Knicks.

Curry wasted no time tying Ray Allen’s mark of 2,973 3-pointers by sinking his first attempt, a 29-footer just 64 seconds after tipoff. Curry missed his second attempt before making history at 7:33 left, when he hit a 28-footer beyond the reach of a fast-closing Alec Burks for No. 2,974. 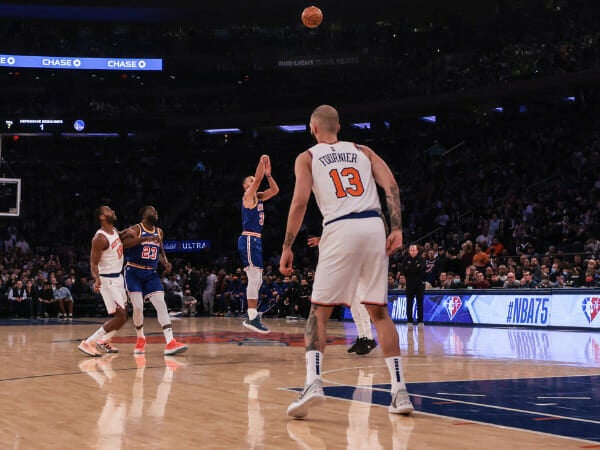 At halftime of the game, NBA commissioner Adam Silver issued a statement: “It was thrilling to see Steph break the NBA’s all-time record for 3-pointers. He has revolutionized the way the game is played and continues to leave fans in awe with his amazing artistry and extraordinary shooting ability. We congratulate him on this historic achievement.”

After the record-breaking basket, Curry blew kisses to a roaring sellout crowd at Madison Square Garden and pounded his chest. Once the Knicks got the ball over halfcourt, a timeout was called and Curry’s teammates and coaching staff poured on to the court to exchange hugs and high-fives.

Curry received the milestone ball from head coach Steve Kerr and almost immediately headed to give it to his dad, former NBA star Dell Curry, who was sitting courtside. The two shared a warm hug.

The younger Curry then exchanged hugs with Allen, who was also sitting courtside. The game was being broadcast on TNT by Reggie Miller, who held the record from 1998 until Allen broke it during the 2010-11 season. The TNT cameras captured Miller recording Curry’s celebration from his seat on broadcast row.